It’s time for some DRASTIC measures… 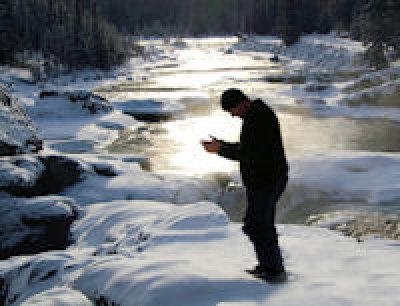 I've called in some favors; made a few phone calls; drudged up some older snow dance videos and I THINK "the fix is in" and we'll get some much needed cold air and maybe even some snow heading our way!

After reading email after email and messageboard post after post alluding to how terrible everything is – I KNEW I had to do something. So, here's what I've done. 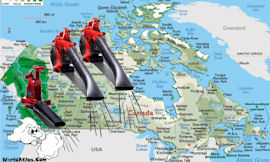 Paul Bunyan – you kids remember him? It seems that he carries a line of HUGE (I mean r-e-a-l-l-y huge) leaf blowers from Husqvarna. (If you're a Husqvarna rep I either owe you an apology for using your name in this story or YOU owe me some ad money! We'll fight that out later if needed.)

You can click on the image for a larger view!

Anyway ole Paul has several that he's not using right now, so I put in a call to him, right after I had my final talk with St. Nick about my girl's upcoming Christmas gifts. (Priorities MUST be kept.)  Anyway I asked him if we could borrow a fleet of those bad boys and he advised me that one or two of his would do the trick. So I went with three. We're desparate here.

I had him position ONE right over the Hudson Bay in Canada with the engine compartment centered nearly over Manitoba and the blower just north and east of Thunder Bay and the Canadian & United States border.

The second beast of an air blower was placed at Tuktut Nogait National Park in "you can't GET much colder than that Northwestern Canada, eh? I had Paul setup the blower nozzle to line up just west of Reindeer Lake in Eastern Saskatchewan as I thought that would stir up some hard push of cold air down to the United States.

Paul then scared me a little when he warned me about using more than two leaf blowers, so I opted to go with a little smaller version for the third tool. He positioned that one for me over Prince George, British Columbia, with the nozzle protruding south over Water Lakes National Park.

Feeling that I had now worn out my welcome mat with the Bunyan family (Mrs. Bunyan is a beast of a woman…) I then checked in with that old blow-hard "Wes Winds". He didn't have anything going on for the next couple of months so it didn't take a lot of arm twisting to get him to head out to the Northwest and do some blowing of his own. I booked him a trip out to the Columbia River in Washington and he's doing his thing over there this morning.

(by the way this is working already as BEECH is making snow right now at 9:49AM. See the STREAMING CAM at: http://www.resortcams.com/webcameras-beech-base-cam.php

PHASE TWO…(Nope I'm not done yet…)

I then conjured up some old snow dance footage from Tina and Tom Curley of Pace, Florida. Actually there were THREE great snow dance videos that we saved from the best of the best in 2009 and since I was dealing in "threes" I went with all three of these videos.

Check them out here on our Ski Resort Videos Page

You can watch them individually at the links below.

SkiZer from the messageboard and the Bailey family and some crazing barking dog did QUITE an entertaining jig our cameras.  Skizer's snow dance is at: http://youtu.be/gkuRdSmzXLE

Evan Wiley also put together one that was simply hilarious and the winners that season were the Curley's from Florida. If my memory is correct it bombed snow and cold temps all season long after those went LIVE. His video is at: https://www.skisoutheast.com/videos/snowdancevideo_evan_wiley.htm

Tina and Tom's WINNING video is at: https://www.skisoutheast.com/videos/snowdancevideo_tina_tom_curley.htm

PHASE THREE…(I'm bringing God himself into this!) 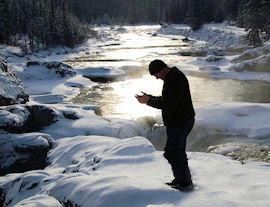 I prayed. Yes – I prayed. I'm sure I'll get some mind-numb critics who will write me, but go ahead – give me your best shot. I can take it.  I can tell you that is has little or nothing to do with living in "the Bible belt" however I have it on good authority that I am not the ONLY one remotely connected to the ski industry east of the Rockies that is praying for colder temps and some snow.

Joe Stevens writes a column for us that we call "Snow News is Good News" and it could also be titled "Snow Business is Good Business". A snowless and "cold-less" winter is NOT good for business. After an abysmal, appalling winter in 2012 anything closely resembling that would very tough on the ski resorts themselves and every business in each of our ski communities.

I spoke with a vacation cabin rental company owner on Monday who has enjoyed a decade of phenomenal business until last season when she said things were off by nearly 40%. She shared, "Mike, I don't know what to tell you. If we have another season like last winter, we may not be here."

She ended the conversation by spending a considerable amount of advertising dollars with me and then said, "Hey, pray for us."

That's something that is SAID too often without actually carrying it through. So I did. Maybe some of you guys and gals can and will as well.

Editor's Note: This probably should have been listed as Phase One, cause God doesn't like coming in anything but first in our lives, but He'll understand. It's a tourism thing 😉 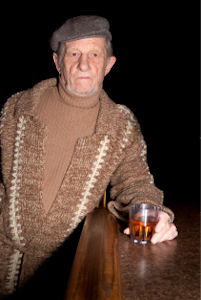 I spoke to an old Irish friend who seems to always have an Irish blessing for everything. He's like one of those old Elvis movies where no matter what the subject is – there's a song that can be sung.

Put a drink in his hand and he's like an Irish juke box with blessings.

Anyway my old buddy, Paddy O'Furniture came to our rescue with this Irish Winter Blessing.

May it snow so deep that Mother Earth will strain to hold it, and may the roof above you never fall in – and may us good companions beneath it never fall out!

May you slide down the ski slopes of life, but may the death cookies never point in the wrong direction.

May you been rewarded with the best of life's trails without a single tumble, gaining the smiles o'life and not a single grumble.

May you never ski over a blind hill to find skiers and snowboarders sitting in your path; and if you do, may you avoid them.

May your doctor never earn a dollar out of you,
May your heart never give out,
May the ten toes of your feet steer you clear of misfortune and obstacles in the snow…And before you're much older,
May you hear much better blessings than this.

Herb Stevens' shared his morning audio blog for the West Virginia ski areas and he's saying things will look great in a week up that way.

You can check that out at https://www.skisoutheast.com/video-forecast.php

Brad Panovich will get us HIS weather update this evening and we'll be sharing that with you guys in the morning.

In the meantime from our novice perspective it looks like snowmaking temps should kick in around Banner Elk on THURSDAY NIGHT and snowmaking temps look to be on tap for every night through at least December 27th. EIGHT nights of snowmaking will make things look pretty darn nice.

The weather around Davis, WV which is home to Canaan Valley and Timberline should be getting snowmaking temps as early as Wednesday night. They have some snow coming in Friday and Saturday as well as some around-the-clock snowmaking temps the 21st through Christmas Eve. That will make for plenty of nice terrain open at the WV ski resorts.

MAN, that's enough out of me for today. I've done my best. If you're a dancer, dance. If you pray, PRAY. If you're of Irish decent – I apologize in advance for robbing portions of true Irish blessings. If you're a believer in old folklore – say "Hi" to Paul Bunyan for me.