It’s Monday and Things Look A LOT Better This Morning 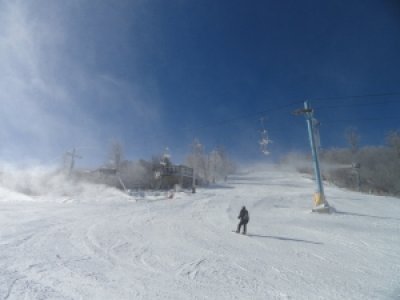 Monday mornings are a whole lot more fun for me when I come into the office and all of the webcams are showing MUCH improved conditions at the ski areas across the region. The tail end of last week was looking a little rough for pretty much everyone but things have made a nice turnaround over the weekend.

I was in Charlotte all weekend and kept up with all of the cams to see how things progressed. In particular, the new Appalachian Ski Mountain cam is pretty awesome. Snowmaking looks great on it and you can really get a feel for how good of a snowmaking system those guys have out there. They were really cranking out the snow for a while this weekend.

As it always does, I was amazed at how it only took a good 24-36 hours for things to look so much better for everyone! I was almost convinced to drive up to Beech on Sunday to ride, but Sunday NFL Ticket on DirecTV was too tempting. It also helped knowing that I would be riding after work as much as possible this week. I’m really looking forward to riding at either Beech or App tonight.

Several trip reports over on the messageboard also showed some pretty nice conditions at Cat, Beech, and Snowshoe. In particular, 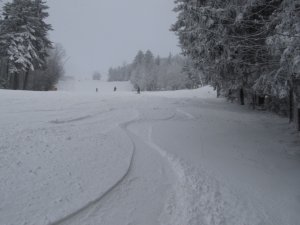 Snowshoe looked like it was really fun this weekend and there was even some powder to be had on Sunday morning, limited as it might have been. If you haven’t joined the messageboard yet, you should! It’s a pretty good resource and a cool outlet to meet new people.

<<< There was a little bit of pow to be found Sunday morning at Snowshoe.

The question now is, will it hold up this week for those who are planning visits over the holidays? Mike talked about this somewhat on Saturday, so I figured I would give my two cents on the topic. The upcoming work week doesn’t look to be particularly nice for any ski area across the region. There is overdeveloped snow in the forecast for everyone unfortunately. Things look a little better for the weekend, mainly for the northern most ski areas in the region (Snowshoe, Canaan, Timberline, Wisp). In general though, it looks like this less than desirable weather will continue for at least another week.

So, conditions won’t be as good for the Christmas weekend as the past few have been, but there will be rideable terrain no doubt. It’s all about your mindset. Yeah, this year hasn’t been as good as the last few, but there is still fun to be had. A day on snow is way better than one that’s not.  Spending the holidays in the mountains is always fun too.

Alright, now it’s time to get to the resorts and see what’s going on this morning. Here we go.

Appalachian Ski Mountain – They are open for day and night sessions today on 8 trails. Two terrain parks remain open with a number of features set up. It is crazy how little time it took them to make things look exponentially better out there! Ice skating is open as well.

Beech Mountain Resort – They remain open with 5 trails and 4 lifts operating today. They did make snow last night and into this morning. The grooming looks fantastic out there this morning on the base cam. I just called up there and they are open for night sessions this week! Looks like I will be heading up there after work. 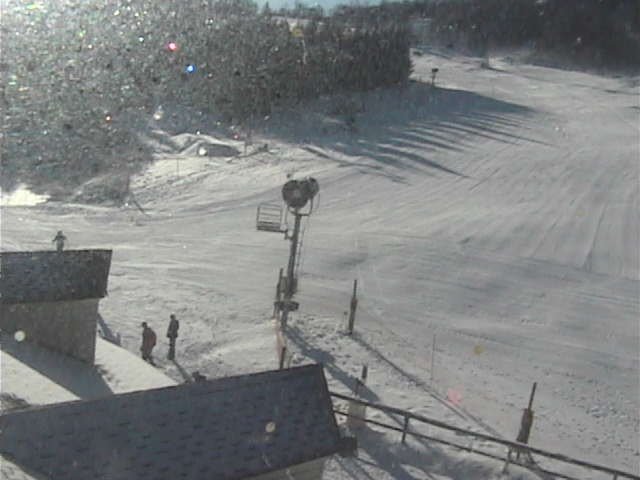 The grooming looks >>> excellent this morning at Beech!

Cataloochee – Cat also made snow last night and things look good up there this morning. They are open with 8 trails and 4 lifts today. They are night skiing and tubing is open as well. It appears they added a new webcam as well. Good stuff! 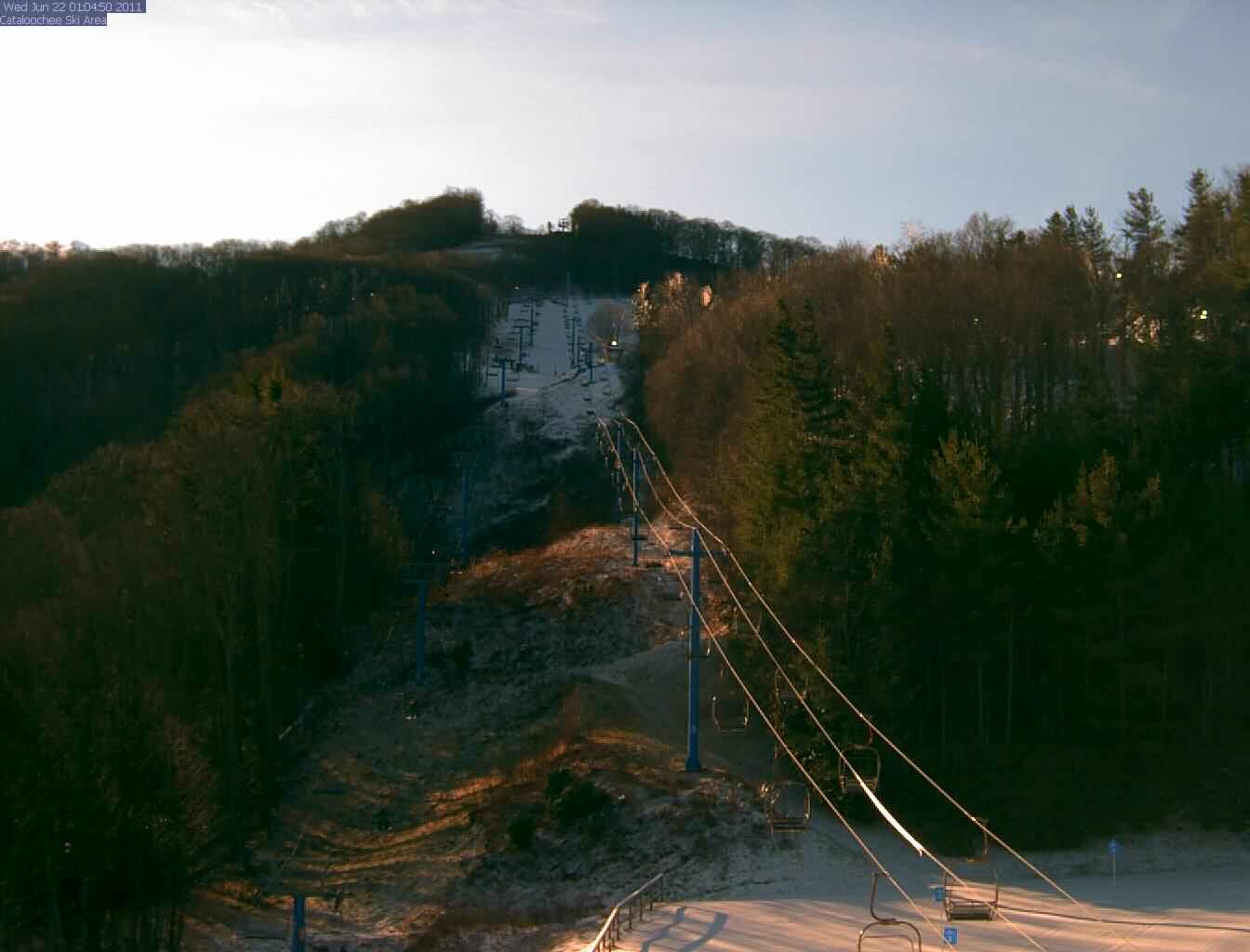 Bryce – Conditions are much improved at Bryce this morning compared to Friday. You could hardly see anything on the webcam at 7:45 this morning as they were blasting the slopes with snow. They haven’t updated their site yet this morning, but I’m guessing they are still operating on the same 4 trails as they have been all weekend. Tubing is open as well.

Massanutten – The Virginia resort continues to be open on 3 trails today. They did make snow overnight. They will be night skiing and tubing is open as well.

Wintergreen – They opened this past weekend and remain so today, with 5 trails and 2 lifts operating. Their site says they will be setting up some terrain park features today. Snowmaking did take place overnight. Tubing re-opens tomorrow.

Snowshoe – The Shoe remains one of two open ski areas in West Virginia. They have increased their open trail count to 21 today. They did see a trace of snowfall overnight and made snow as well. Here’s what they are saying…

"Our snowmaking and grooming team has been hard at work and have expanded 10 additional acres this morning including Powderidge at Snowshoe and Cubb Run at Silver Creek! Groomer’s choice this morning is Gandy Dancer. The conditions are great and there is tons going on around the mountain this holiday season. Santa and his friends are hitting the slopes today and carolers will be singing their way from Silver Creek to Snowshoe. Spruce Glades is open as an intermediate trail with a fenced terrain garden, and the Progression Session Park and Robertson’s Run are open as beginner trails."

Timberline – They opened over the weekend and remain so today. They are saying on their snow report that they saw another 1.5” of snowfall overnight. Four trails are open today.

Wisp – Wisp also saw some snowfall over the past 24 hours. They received an additional inch, which means they have seen 3” of the white stuff over the past few days. They are open on 4 trails today and they do have a terrain park open as well. Ice skating and tubing are also open.

Winterplace and Canaan Valley are scheduled to open this week as well so hopefully we’ll have just about every ski area in the region open by the weekend. Ober hasn’t announced anything yet, but they have been making snow whenever possible and will open ASAP.