It’s BEEN Looking a LOT Like Christmas, Everywhere you go…

I don’t think I’ve ever in my 15 seasons began a snow report by telling you guys that the heaviest snowfall of the morning so far has fallen at Sapphire Valley Ski Resort in Sapphire Valley, North Carolina! 5.4" has officially fallen over there compared to 2-4" across some areas. More in a bit…

I KNOW that our websites are getting BOMBED with all of you guys coming on checking out all the LIVE SNOW CAMS! THANKFULLY, we THINK we’re prepared to handle it. A month or so ago we had 3200 connections (people) per minute trying to bomb the site and even though we had the machine to handle it, we came up woefully short in delivery. This time around it looks good this morning as you guys are killing us with visitorship but "all systems are go! We’ve throwing all of the dilithium crystals we have at it and givin’ it all she’s got Captain!"

Last week we separated things into new "web gardens", pushed the heaviest hit websites into their own little cloud and even threw more RAM to the box. She’s operating wonderfully despite record visitor tallies coming in this morning.

After more than a 18" to 22" of snow fell in the North Carolina, West Virginia and Maryland Mountains a week ago – ANOTHER 3" of more has fallen overnight Saturday night across much of the region with the heaviest snowfall in the Western NC mountains. Mars Hill, home to Wolf Ridge Ski Resort (the old Wolf Laurel Ski Resort for those who don’t come around often) has seen 4" of snow thus far and it is falling like crazy according to two sources over there.

From eight to eighteen inches of snow is forecasted for Sunday into Monday across the very same region with significant snows forecasted for the Virginia ski area mountains as well.

It is INDEED looking a lot like Christmas for skiers and snowboarders – as well as ALL snow lovers across High Country Weather land!

We’ve received reports of heavy snow already over near Brevard, North Carolina where 5" of snow has already fallen.

Brad Panovich’s forecast video was updated late Friday night but I was on the road (again) and couldn’t get to it. I uploaded it to the server now and it’s a good one. He forecasted another EPIC Northwest Snow event today (Sunday) that appears to be setting up for later today into this evening. The NWS and other sources have been calling for 2-4" for the past few days and our guy Brad has leaned towards a foot or more all along. Sooner or later everyone else will follow suit. 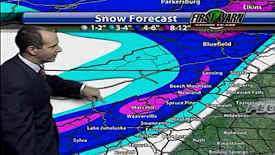 As I mentioned earlier, we’ve already seen some significant snowfall this morning and NO WIND BY THE WAY! However, Brad is forecasting that later today, the BLIZZARD-like winds will kick in along with the heavier snow again and through Monday and possibly into Tuesday. He’s thinking 8-12" of snow for much of the area by Tuesday AM with more into West Virginia and Maryland – again.

I’ve got a lot on my plate this morning so here’s the combined tour for today. We’ll be posting the newest video blog which will cover the "feel" of this past few days. The video will include the tale end of the last big snow, Snowshoe Mountain’s rope dropping and some other tidbits. Be sure to check back for it.

Appalachian Ski Mountain – 27° – 2" of new snowfall – 16" on the season – They are FULLY open with all 12 slopes and trails and Powder skiing and snowboarding for today and tonight! Ice skating is open as well.

Beech Mountain Ski Resort – 26° – 2" of new snow and 32.5" on the season! – Beech will operate on 12 of 14 trails for Sunday and Sunday night sessions on Powder conditions with more snow on the way.

Cataloochee Ski Area – 31° – 1" of new snow and 11" on the season. Cataloochee will only be open for DAY sessions on Sunday but they’ll play on 11 of 16 trails and perfect conditions for your day snow fun!

Wolf Ridge Ski Resort – 26° – 4" of new snow and 22" on the season. As we reported earlier – the heavier snow has fallen over towards the Western part of the state so far today and Wolf is getting it. They will operate for DAY SESSIONS only today as they anticipate the blizzard conditions later. They have 8 of 20 slopes open for day skiing and snowboarding.

David Lesher of Davis, West Virginia wrote, "At 900AM Currently light rain and 34F. Few wet snowflakes mixed in during past hour."

He is reporting NO SNOW thus far for the last three days but bear in mind that they’ve seen 41.9" of snow thus far this season AND the forecast is for that area to be dumped on today through Tuesday. Stay tuned.

Snowshoe Mountain – 32° – One-half inch of new snow and 27.5" on the season. Snowshoe is open with 24 of 60 slopes and trails open with wet packed and groomed conditions. That will quickly turn to POWDER as snow is now already falling. That’s what I love about the fact that Snowshoe is an official weather reporting station for the NWS. Laura posted the following statement which is NOW coming around to what Brad Panovich has been forecasting for them. She wrote, "What’s currently falling in the valley as rain has already changed to snow up top, and it’s falling fast; almost half an inch already coats the top of the mountain. Snow is predicted to fall for the next several days and some models are calling for HUGE accumulation totals. National Weather Service is predicting 3-7” today, with up to another 8” throughout the day Monday, with additional snowfall overnight into Tuesday."

Winterplace Resort – 34° – No new snow and 15" on the season. They are reporting today! We see 14 trails of 28 open with a great base of 24-64" of groomed snow! SNOW is in the forecast for today! They have their terrain park open as well! Snowtubing will open soon!

Canaan Valley – 34° – No new snow and 41.9" on the season with more on the way! They are open for DAY SESSIONS SUNDAY with 5 of 39 trails open. Ice Skating is open as well. Snow tubing opens next week.

Timberline Resort – 34° – No new snow and 41.9" on the season. Timberline’s website is reporting 7" of snow in the last 24 hours and that isn’t the case. I called over and they confirmed that no snow has fallen and in fact it is freezing rain right now with snow on the way. They will be dumped on later today. For Sunday Timberline will operate with 4 of 37 trails open and they have 15" on their cross country terrain.

WISP RESORT – 28° – No new snow but 27" on the season. Wisp Resort is Open Today 9am – 5pm. Wisp is also celebrating their 55th Birthday celebration December 12 & 13 with 18 of 32 trails open, ice skating, snow tubing and their Mountain Coaster!

Ober Gatlinburg – 35° – No snow yet but it is forecasted for today! They have 5 of 8 trails open through 7pm Sunday! They have the best ice rink in the region and it is open year round.

MOVING TO THE VIRGINIA SKI AREAS…

At first glance via the official CoCoRaHs reporting stations there has been NO reports of natural snowfall yet this morning as of 9:32am. Let’s look closer:

Massanutten Resort – 24° – They are reporting 24° at the top of the mountain but no snowmaking. Their website is showing no trails open, however they DO have 10 of 14 slopes and trails operating for day sessions on Sunday as well as 8 lanes of snow tubing with groomed conditions.

Wintergreen Resort – 32° – They are getting freezing rain but that should change over to SNOW pretty soon and conditions will be great once that happens as Wintergreen has 13 of 26 trails open for day sesssions on Sunday. I like the way they write, "-3 INCHES OF NATURAL SNOW ON THE WAY… Today’s forecast calls for light rain to change over to snow as more incredible snowmaking weather moves in. Round the clock snowmaking starting tonight means a lot more terrain open by next weekend. Today we will ski and ride on all 3 sections of our mountain. Opening HIGHLANDS this early is a real treat. In addition to having THE HIGHLANDS, our snowmaking and grooming crews finished up Sunrise and Tequila overnight! These guys are the best! Pack up your gear and start heading this way!"

Bryce Resort – 34° – Reporting freezing rain this AM but snow is forecasted. They will be open for DAY sessions only on Sunday with 6 of 8 slopes open.

The Homestead – NO REPORT

Check back for more news and reports from around the region.