It WILL BE GREAT Riding on Sunday! 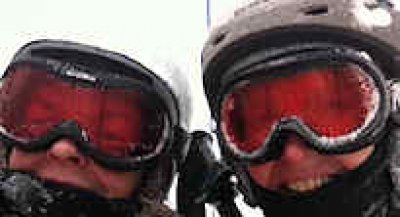 Check the SNOW REPORT page for the details but suffice to say that if you’re going on the "visual factor" things look AMAZINGLY wintry around most of the region’s ski resorts today. After anywhere from a dusting-10" of snow fell on Wednesday/Thursday and after three nights of great snowmaking ops – things have taken on a decided winter-wonderland look. I can tell you that several ski areas were able to make snow all Friday night and have yet to turn the snowguns off as they were able to crank it out all day on Saturday, Saturday night and this morning as well. The resort’s snowmakers are working hard this morning to keep cranking every machine-made snowflake that they can until temperatures dictate that they turn them off later today. Highs today are expected to hold at or around 32° at numerous locations from Snowshoe Mountain north. From Winterplace Resort in West Virginia and south things will mild up just a notch warmer into the mid and upper 30s.

Temps dipped anywhere from 9° at Davis, West Virginia’s Canaan Valley, to 10° at Snowshoe to 20° at Sugar Mountain and that has kept the snowmaking equipment jetting out the white stuff.

Saturday was a little bit blustery at some locations and with the heavy dose of snowmaking happening during ski and snowboarding sessions at the five ski areas that were open – that led to some grumpy emails in my INBOX.

Okay – SOME of the grumpy emails were aimed at yours truly but more about those in a second. Many of you who ventured to the slopes yesterday emailed me so not so glowing reviews. Here’s the gist of them:

James R. wrote, "gotta tell ya that i no we need to make deep bases but i saw a lot of death cookies and with ice machines hitting you in the face all day, i’m not sure $60 is a fair price for what i saw on saturday."

Austin wrote, "I know you wrote this morning (Saturday) that things looked awesome, but if you think things were awesome at XXXXX (name withheld) ski resort today then I have some Polex watches I want to sell you. Those snow blowers made things horrible today and for $66! Give me a &^%$ break! (Profanity supressed.)"

Okay my educationally-challenged friends (there were more than 20 of you wrote me on Saturday evening). Let me see if I get this straight. Wednesday, there were NO slopes open and NO ski resorts. None. Nada. Fast forward three days and there were 35 trails open at 5 ski areas with bases ranging from 6-25" or so and you’re REALLY going to complain?

Every Monday through Thursday since October 1st we’ve seen temperatures that inspired golf or tennis – with some monsoon rains added in that would have kept me off the golf course – and yet EVERY WEEKEND since November 11th (that’s the last five weekends in a row) Sugar and Cataloochee have been aggressive and proactive enough to make snow on these Thursday-Friday night borderline temperatures that we’ve experienced. …and you’re going to complain about snowmaking equipment running?

A couple of you reported some bad grooming as well, but when there’s not a TON of base down, occasionally you’ll get that…especially when the temps drop to near single digits overnight. For the most part we heard that the grooming was pretty great on Saturday morning.

As per the full price lifties…I’m only going to address that this way: You saw the slope reports, you chose to go. If the price seems a bit high, it’s because it is. I’d bet the ski resort admins kind of winced a little as they set the pricing for this weekend. However there IS an alternative. You could drop about $100,000 by YOUR local power company for the right to crank out some snow and ski in your own yard. I’ve heard that household garden rakes are pretty decent for home grooming. …and that walk back up your yard isn’t so bad for the first five times you climb it. 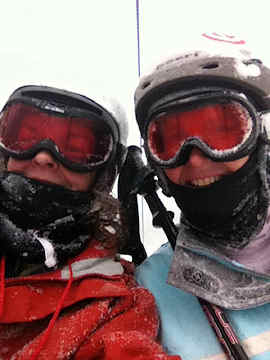 Those people in the know (and there a LOT of you out there) know that right now the ski areas have to make snow whenever possible and that unfortunately means you’ll have to be prepared with goggles, face and head covering, good gloves and proper clothing.

Sunday should be an awesome day on the resorts open as the snowguns will probably go offline at some point today and that will make for a bluebird day. PHOTOS AND VIDEOS PLEASE!

The main complaint emails that I received were about my Saturday morning blog. It seems that the main complaints were aimed at my comment which said, "Many ski areas will have additional snowmaking opportunities through Tuesday and Wednesday night but then we’re looking at a forecast from December 13th through the 19th that is not condusive to making snow. If that forecast holds, that will put many if not all of the ski areas just one week away from the important Christmas to New Year Holiday ski period with little to no trails open."

I have to admit that statement is kind of opposite of my usual, glass-half-full take on things. However as I tend to say – it IS what it IS. I’ve been following all the long range forecasters looking for any hope on the horizon and there are some forecasters who are saying that we have a 10-25% chance for a White Christmas. I suppose that’s better than a snowball’s chance in hell.

Natural snow would be great, and there ARE some chances of natural snow in the forecasts around the 20th of December. Hopefully that kind of forecast will carry right into December 26th and beyond. HOWEVER, what we REALLY need are consistently cold temperatures like we’ve had since Thursday. We need teens and 20s at least at night to allow our ski areas to crank out manmade snow. We’ve had that for three straight days and that is great. We should see more snowmaking ops tonight at most of the ski areas. Some areas like Snowshoe, Canaan, Timberline and Wisp could see some decent (not great) snowmaking ops Monday night and maybe Tuesday night. But then we’re looking at some showers of under-developed snow (rain) in the forecast next weekend up that way and overnight lows that will be borderline for snowmaking. That certainly isn’t condusive for primo conditions going forward. SNOW and cold temps DO reenter the long range forecast for the 20th of the month…but nobody puts a lot of stock in long range forecasts.

Drop southward into Virginia, North Carolina and Tennessee and things look a bit more sketchy. We will see snowmaking tonight, but Monday night is probably not going to be a snowmaker kind of night for the ski resorts in these states. Highs in the 50s and lows in the 32° to mid 40s through Monday, December 19th don’t exactly ignite visions of sugarplums for me. Tuesday, December 20th looks to be around 28° for a low if that can be trusted at all. (Again, forecasts further out than five days are pretty much bogus.)

WHAT DO SOME EXPERTS DAY?

Obviously we’ve been holding onto some hope that most of the preseason forecasters were predicting a mild, early December. Those same weather gurus forecasted a cold turn around the middle of the month. At least through the 20th – that doesn’t seem to be the case as far as the forecasts are concerned.

We can HOPE that we see some freakish cold temps and lots of snow hit around the 20th, but things are not looking great at this time for there to be the kind of Holiday experience we all yearn for.

THAT COULD CHANGE…but we’ll need to see some indicators that signal change is on the way. I’d expect that we’ll hear from Kenny Griffin and other weather experts soon on this issue. However I JUST received this bit of "indicator" from Mike Stinneford, a meteorologist out of the Washington, D.C. area – who is a big fan of SkiSoutheast. He wrote:

Been another busy week here in DC. We are enjoying some cold weather…in fact this morning we had the first freeze of the season in DC as temperatures at Reagan National fell into the upper 20s. Of course the suburbs have been below freezing many times in the past month.

Mike, it isn’t looking good for skiing for Christmas. We are going to warm up this week. Don’t be surprised if some areas get up to near 60 by Wednesday and Thursday. A cold front will come through late in the week, but the air behind the front is fairly mild Pacific air, and we’re not going to cool off much. There is a possibility that we may see an extended period of mild weather with little or no snow-making possibilities through Christmas. Right now it appears that Christmas Day may be showery with highs in the 50s.

Basically we are in a pattern of "zonal flow". The jet stream will stay to the north, keeping the cold air bottled up in Canada. Even though fronts will push through, they will contain Pacific air that moderates as it comes across the continent.

I am enjoying the site, and will stay in touch as time allows. Have a great week!

(Looks like you guys and gals have ANOTHER MIKE to rant on.)

Let’s hope things turn around soon. I will repeat (to some degree) what I said on Saturday. If we don’t see some cold temps soon, I think we might see some ski areas not even get open before Christmas. That will be a first in my 16 seasons of reporting. That will put a premium on those ski areas that HAVE snow…but there’s no telling how those ski areas will be faring by then.

Look – things could change and weather peeps have been wrong many times before. We need to get a lot of "THINKING COLD" happening. Crank up those snow dances…and in the meantime ENJOY the snow that’s out there and let’s not complain about the snowguns blasting! It looks like a GREAT day to ride at Snowshoe, Beech, Sugar, Cat and App.

Email me your comments, thoughts, photos, vids or anything else you like.  [email protected]

Previous Post
Four Resorts in North Carolina and Snowshoe Are Open Today!
Next Post
Smiling Faces and Beautiful Places at the Open Ski Resorts! This image was taken at Beech Mountain on Saturday and posted by Frances Miller