Improving Weather Lies in the Week Ahead

Good morning everyone! It’s theKENDOG here and I’m back and better than ever! I just stole that quote from Mike and Mike in the Morning on ESPN Radio and I think I’m going to use 0it every Monday from now on. I like it.

Hopefully you all made it through the weekend alright and didn’t let the weather bum you out too much. If you’re a New England Patriots fan, it was twice as bad for you. I will forever pull against the Patriots simply because they beat the Panthers in the Super Bowl back in ’04, so I was glad to see the Giants win. How about them commercials? My two favorites were the Audi vampire one and the M&M’s one where the red M&M was “naked”. My girlfriend liked the E-trade one where the baby said he was speed-dating. It’s funny how she waited to go to the bathroom until the game came back on. I think half the people simply watch it for the commercials.

Anyways, back to snow stuff…It was pretty wet and dreary at most places this weekend, though some of the resorts in the northern most portion of the region did see a few inches of snow. It was pretty depressing to look at the cams this weekend and see raindrops on the lenses and a lack of people on the slopes.

It was really interesting to read Mike’s articles this weekend. You could tell on Saturday that he had some stuff on his mind that he had been waiting all week to write about. I was cracking up at some of the things he said this weekend. He had NO BULL in the title of his Saturday article, and that definitely applied as he didn’t hold back on a couple of things such as base depth reports. He’s really busy with Appnet stuff, but I know he misses doing this report on a daily basis sometimes. Hopefully I’m doing a pretty decent job of covering things so far this year.

We’re seeing a pretty drastic difference in weather conditions across the region this morning. Here in North Carolina and over in Tennessee, it’s pretty crummy to be quite honest. The drive up 421 this morning was kind of sketchy as drizzle and DENSE fog made for a slower than normal trek up the mountain. It’s a cold drizzle as well. A sign in Boone read 33 degrees when I drove past it at about 7:20am. The cams at Beech and Sugar are showing that a little dusting of snow might have fallen, as the trees are coated in white. It isn’t anything to go bonkers over, but it is nice to be able to say that. Sugar is actually making snow right now and they are claiming “manmade powder” conditions. It’s doubtful that’s the 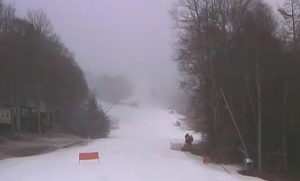 case but it is nice to see snowmaking nonetheless. Nothing is showing up on CoCoRaHS though in terms of snow.

<<< Sugar is making snow this morning!  Manmade powder might be a bit of an overstatement though.

Speaking of CoCoRaHS, you guys should check out the new maps (http://data.cocorahs.org/cocorahs/maps). They use Google Maps now and it is way more interactive. If you don’t know what CoCoRaHS is, you have been missing out! It’s basically a network of volunteers who report in each morning with rain and snow totals. It’s a great tool for looking at precip and snow totals in many different locations. I highly recommend it.

Anyways, it looks like the resorts here in NC and TN will see one more day of cloudy weather with a little drizzle mixed in possibly. Things should begin to clear up a little by the afternoon. I’m thinking I will wait until tomorrow to go riding and either go to the gym tonight or see if Mike wants to play indoor tennis…or maybe I’ll do both!

It’s a different story up into Virginia and West Virginia. All of those ski areas made snow overnight and are looking at sunshine and blue skies today. The cams up into that portion of the region look pretty awesome this morning. The photo of the day on Ski Southeast this morning showed a pretty awesome sight in Davis, WV this morning.  It should be a fun day of skiing and riding at those resorts today. <<< It’s a gorgeous morning at Snowshoe. 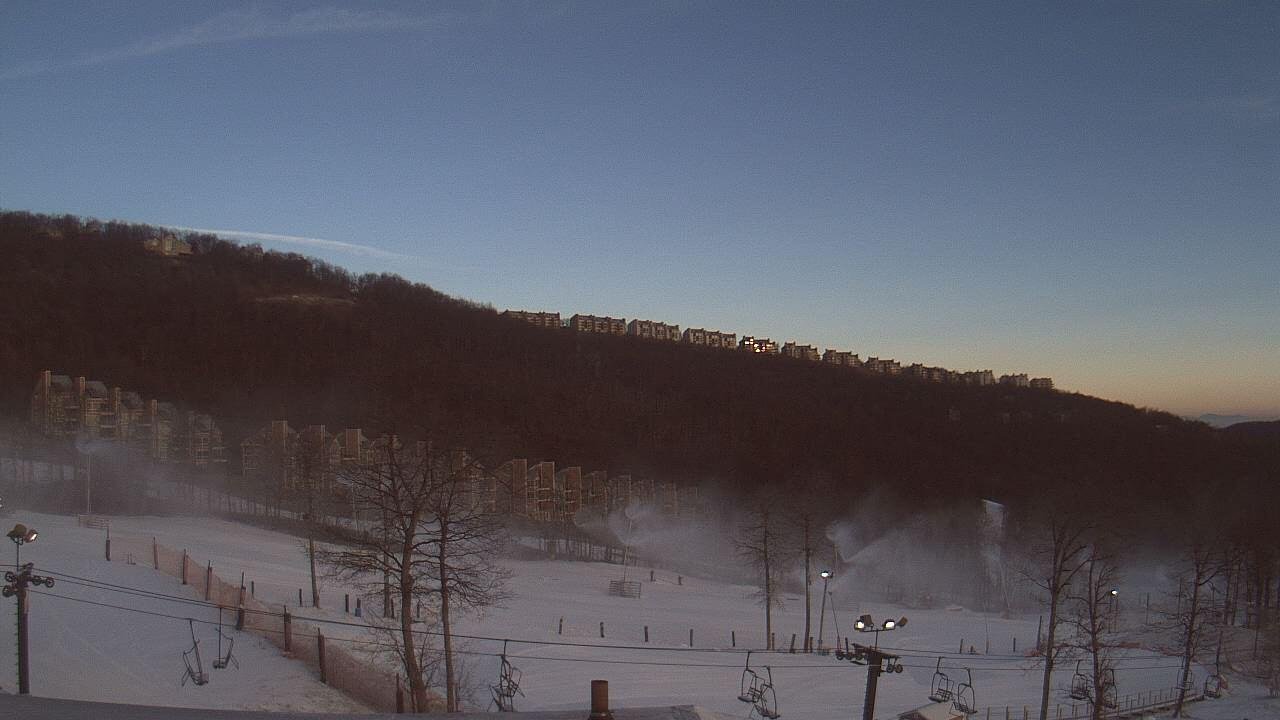 Bluebird skies and snowmaking could be found at Wintergreen this morning. 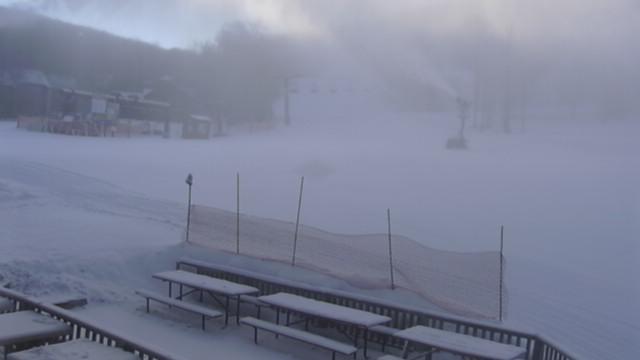 <<< Timberline was blasting the slopes this AM.

Everyone should see improving weather in the week ahead. Snowmaking looks to be in the works every night for every ski area as lows will dip below freezing. More importantly, we don’t have any significant rain in the forecast for the entire week! That is AWESOME to be able to say that. Head on over to High Country Weather to look at what’s in store for the week.