I’m Going to Speak for Every Ski Resort Owner, Marketing Staff and Every Employee at Those Resorts today 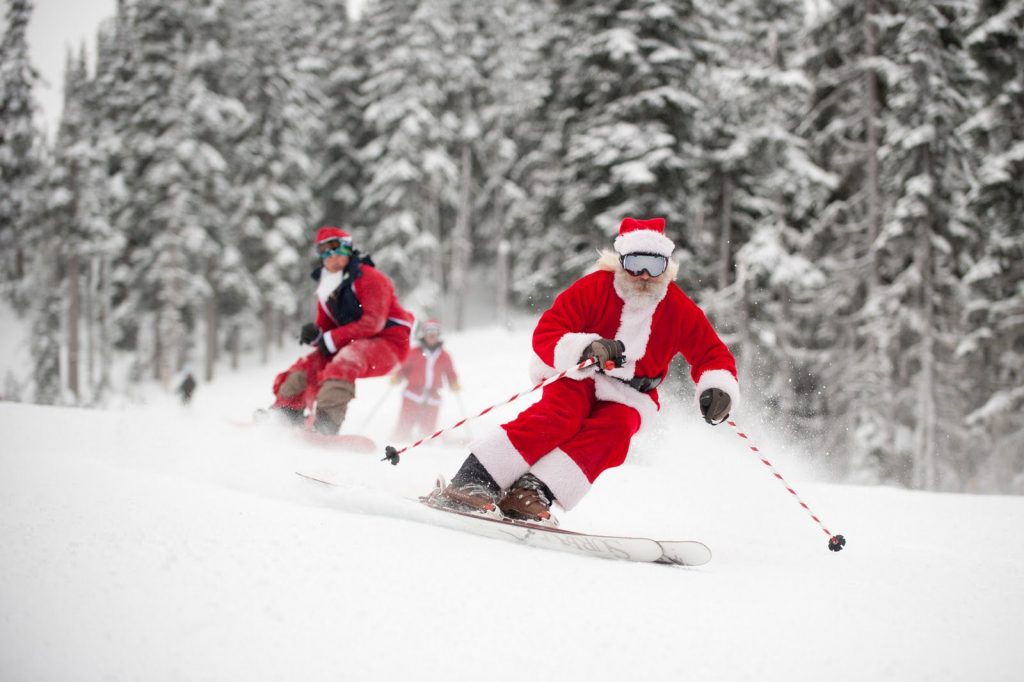 First, Merry Christmas Eve From the Ski Resorts of the Southeast.

Good morning peeps. I know that it’s been kind of yucky of late. I’ve read Kenny’s posts over the last few days and as hard as he tried to “keep a smile in his reporting” you can read between the lines that he’s ready for this “under-developed snow” pattern that we’ve been stuck in for a bit to go away and stay away for the rest of the season.

We all are. But have faith in the men who blast our resorts with man-made snow at every opportunity. Conditions at the resorts range from downright unbelievably good to pretty darn decent and with even a little cold air we’ll see things improve.

Sure, there ARE a few ski areas that are bordering on closing due to conditions. (As of this post Wolf Ridge and Sapphire Valley are closed for skiing and snowboarding today. Wolf Ridge was planning to be closed for Christmas Day anyway, but things are borderline for getting reopened without some snowmaking or snow maintenance. We’ll keep you informed.) 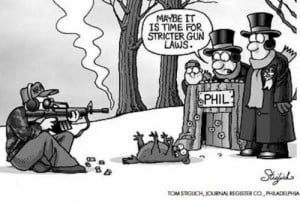 I can safely speak for every single mountain op staffer in the region and say that we’re ready for winter to arrive and remain in full effect until sometime shortly after April Fool’s Day. We’re a long way away from February 2nd and the groundhog phenomenon, but suffice to say that every resort owner, manager, marketing and communications staffer – as well as every employee at every resort wants that critter to climb out of his perfectly, temperature controlled hut and proclaim SIX MORE WEEKS OF WINTER.

(Otherwise, there will be a lot of support for the dude pictured in the cartoon above.)

“We’re working harder than we have in years, with better snowmaking technology than ever, to create every manmade snowflake possible to blanket AS MANY trails as possible for your enjoyment during the upcoming Christmas-to-New-Year Holiday ski period.” – Signed [INSERT YOUR FAVORITE SKI RESORT]

Editor’s Note:
Nobody on the staff of this website actually speaks for ANY ski resort. They’ve never officially given us “that voice”. However, YOU GUYS (who read this website every day) HAVE. It’s funny but when the weather is perfect; when the snow is plentiful and when every slope and trail at every resort is open with awesome coverage – we see more visitors to this website (and ResortCams.com & our weather websites) than we can believe. Sometimes our server admins have had to work overtime to insure that our servers can handle the load.

However, DURING THOSE TIMES we rarely hear from our readers. Oh, we get the normal, “Can you refer us to any slopeside cabins for the week of…” but we don’t REALLY hear from you guys.

It is during the less-than-stellar weather periods like the one we’re weathering right now when we hear from you. When you compound the weather AND the normally, high-volume, skier traffic period like NOW through January 1st…well – WE REALLY HEAR FROM YOU.

…and we always try to answer every email, because we know what it’s like to invest in a ski trip and then have circumstances like the weather put a damper on those plans. (Yes that pun was intended.)

I was speaking with one of our longtime clients late on Christmas Eve, EVE (yesterday) and she was sharing her own concerns over the weather and I gave her my best opinion of how this next eleven days are going to play out. I basically shared much the same content that I shared with you guys this past weekend when I provided the weather report for EVERY SKI AREA as it was at that time.

When I was finished she said, “I have to tell you that I’m positive that the ski resorts must really, really love you guys.”

She added, “It’s no wonder why you’re their official spokesperson.”

Of course I quickly corrected her and stated clearly that we hold no such office, nor do we actually speak for ANY of the ski resorts. In fact, I explained to her that even though we’ve been “at this” for 19 seasons now – that I have actually been rejected for affiliate membership of the Southeastern Ski Areas Association – which is the organization that is comprised of all seventeen ski areas in our five state coverage area.

She then hit me with something that I had not considered until yesterday. She asked me, “Ummm, Mike, I see all of the ski resort’s ads all over your website. Don’t they pay you?”

Why YES, Virginia…they do! (Her name isn’t actually ‘Virginia’ and since I didn’t ask her for her permission to use her name…I won’t share it. Unless, of course she reads this and emails me to do so 😉

It then kind of hit me that while we are certainly NOT officially a spokesperson for ANY ski area – WE ARE ACTUALLY THE MOST READ SPOKESPERSONS FOR EVERY RESORT IN OUR REGION and we have been for several years.

The cool thing is that somehow it totally escaped me that most of the ski areas in the region DO pay us and thus they have entrusted us to promote and represent them. Many of those same resorts actually post announcements to our front page. (We’ve provided our member resorts with that ability.)

So to every COO, Marketing or Communications person at every resort in the region who is reading this post (and you KNOW I can see you, right?) – THANK YOU for your support. Thank you for empowering us here at SkiSoutheast-land to help spread the message of how great our little piece of ski-heaven is.

AND NOW BACK TO THE MESSAGE OF THE DAY…

I don’t know how to be any clearer than to say that if you have plans in place to ski or ride during the upcoming Holiday period – KEEP THEM. If you haven’t already planned a trip, accommodations are scarce…but GET YOUR REAR AND YOUR GEAR up to YOUR favorite ski resort and you can thank me later.

WHAT WILL LIKELY HAPPEN

1. You’re going to find decent-to-good snow coverage on about 50% of the trails at most resorts.

2. The weather IS going to turn cold enough for snowmaking and in case you’re new to how this stuff (snowmaking) works – the resorts can lay down enough snow in ONE NIGHT to open a trail.

I’m going to steal a quote that lives on Wintergreen Resort’s website…but it states:

“Theoretically with optimal conditions, Wintergreen Resort’s snowmaking system could cover a football field with 37 feet of snow in just 24 hours.”

So give these resorts a couple of days and nights of snowmaking and you’ll see a massive uptick in conditions and slopes open.

The forecast is borderline for the next few days, but it is forecasted to turn colder and allow for some good snowmaking ops from December 28th on.

3. Expect to see some natural snow. It might not be a blizzard, but if you make the trip to the mountains, you’ll probably see some snow fall…especially closer to December 29th-January 1st. So you’re probably going to dance in the snow that last weekend of the year. (Again, you can thank me later…and I’ll be expecting it.)

4. You WILL have an awesome time. Truthfully, this Holiday week will probably give you a few raindrops to dodge. So what? That’s a great time to gather up your family and play some games indoors. Spend some quality time with YOUR people. Pack them in the car and head to a bowling alley or take in a movie and stay tuned for the snow.

SO HOW’S THAT for an uplifting message?

In closing, NO I’m not speaking FOR any organization. I’m speaking for YOU GUYS. I’m speaking for all of the hard working, dedicated mountain crews at each of resorts who have been working overtime to make the slopes and trails the best that they can be. If you spend a few minutes on ResortCams.com and View the Live Ski Resort Cams you’ll see for yourself how decent things look.

I was looking at the new Silvercreek webcam at Snowshoe on Saturday and I have to tell you that the conditions there were nothing short of Currier & Ives – worthy. We’ve had a little rain over the last few days and even so, the resorts look in pretty good shape. Give them a couple of days of snowmaking and with a little natural snow from God Himself and we’ll be sitting pretty.

So if you HAVE reservations…keep them.
If you don’t …then MAKE THEM.

Editor’s note:  We just checked with Snowshoe Mountain Reservations and they are 100% booked for the Holiday week. We’d take their lead if we were you guys.

Note: Thanks to the Journal Register of Philadelphia for allowing us to use the cartoon.)