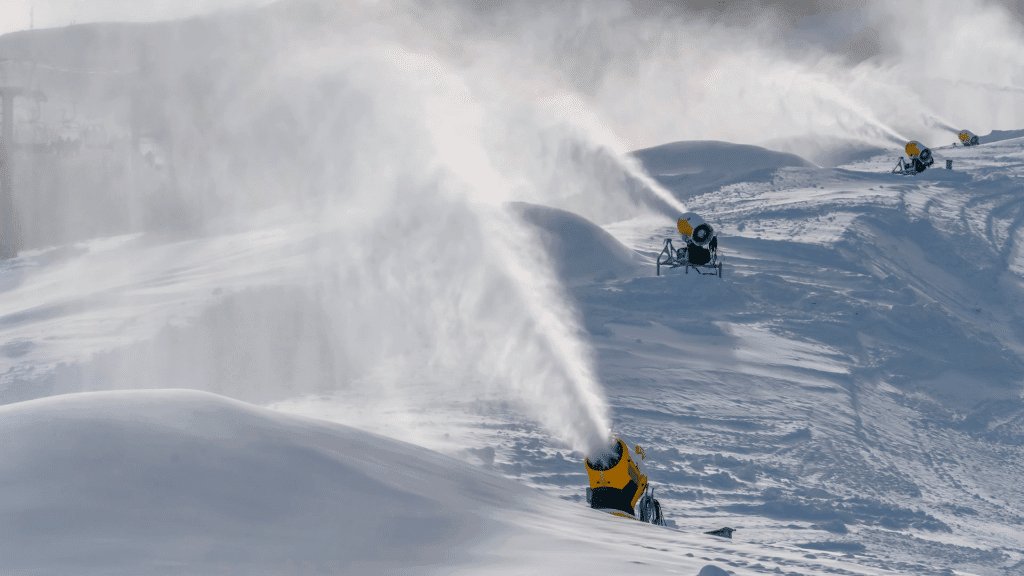 Sometimes I think because of all of the technology out there these days, such as on-slope, real time resort cams, we get spoiled with the good days way, way too quick. When things are rolling along nicely, everyone is happy, happy, with lots of smiles placed on the pretty Facebook pictures of nicely covered slopes. But as soon as things (conditions) go a little sideways, you would think that the apocalypse was upon everyone. One word describes my feeling about that, ugh.

We are now in the month of December and the first official day of winter is still more than 2 weeks away, starting on Saturday, December 21. But the southeast region received that blast of cold temperatures in November and everyone got to witness snowguns going around the clock at just about every resort. Boy, did that ever look awesome and you could tell by the amount of pageviews that skiers and snowboarders were excited. Even the comments I read here and there on various chat areas were extremely positive for the way the resort mountain operation folks were stepping up to make snow while the temperatures were below freezing. Now – that we’ve had some milder temps,  I have caught a few ‘well there goes the season’ comments.

Oh my goodness, just hold on, we will be just fine.

That is kind of my point here. Technology, has taken away some of our hope and patience these days. There are some of us out there, that even though the slopes look just fine yesterday and may be a little off today, well today wins out and, if tomorrow is looking better, today still dominates everyone’s thoughts. Come on folks, take a chill pill and realize, what you are seeing today, might be totally different tomorrow.

I have said in the past and now will repeat, the reason why every skier and snowboarder is seeing as much snow on the slopes right now is not only because the subfreezing temperatures last month, but thanks to the millions, upon millions of dollars spent by the ski resorts in the southeast. If you think this region’s ski industry could survive without state-of-the-art snowmaking, you are sadly mistaken. There is just enough natural snow that occurs in the region to support the couple of a million skier visits that occur each season throughout the region.

When I started my career in this industry in the mid-80’s, the art of snowmaking was still in its early stages, even though according to Wikipedia, snowmaking began in 1950. Efficient snowmaking really didn’t come to life until in my opinion until the tower fan guns. Of course, this is open to debate, but I witnessed firsthand, slopes get covered a lot quicker after we started seeing those tower guns start putting out the white stuff.

Now, as we head straight on into another season, there are updated, efficient snowmaking tower guns everywhere you look these days. I am here to say, those snowguns are not cheap and I am also here to say, not enough of us give a hoot about how much each resort invests in snowmaking upgrades each off-season. Most skiers and snowboarders would rather see a new trail, (who wouldn’t), or even a new detachable quad lift to get everyone back on the slopes quicker. But wake up folks, if it wasn’t for top-notch snowmaking, none of those slopes would be covered or any of those lifts would be operating. It just wouldn’t happen and that’s a fact.

I have written in this space how much resort cams have helped get the word out about what is available and what it looks like at every resort in the southeast region. But sometimes I just think folks aren’t happy if they don’t see white stuff coming out of those snowguns, 24-7, after the guns commence in late October or early November. There are some of you, when the guns aren’t operating before the ropes drop, well the season just isn’t going to happen. These are probably the same folks who complain that snow is being made on open terrain in January, February or March when they are skiing or snowboarding on the slopes. Don’t even get me started on the cost of new snowguns and what every resort pays to their local electric utility for power during the ski season. Believe it or not and I know for a fact, that bill can easily reach into six figures and in some cases even seven figures. Can you imagine opening that bill at your home in February. If I did that, someone would have to do CPR on me, as I know my heart would stop.

Now for the, ‘why is this trail open and not my favorite trail’, thought process. Even though you may be, or think you are an expert skier or snowboarder, the majority of you winter sports lovers out there are upper beginner to intermediate skiers and snowboarders. That means for the most part, the most used terrain at any resort is for beginner and intermediate skiers and snowboarders. Please realize that resort operators have to provide the most for the masses and bring in expert terrain as the temperatures allow and the more used terrain gets open.

I know, I know, I just put down some major green backs or plastic to ski or snowboard on the trail that I want to. I hear ya, I really do, and I am here to say if a resort could wave a magic snowgun and open 100% of their terrain, it would be done. But that isn’t the case, is it, and we all know that, don’t we?

So, repeat with me, I will be patient this season and I will thank every snowmaker I see when I visit my favorite resort this winter, because I just can’t wait.

Previous Post
WINTER WEATHER ADVISORY IN EFFECT FOR UP TO 9″ OF SNOW. SEE WHERE!
Next Post
1st Winter Storm of the Ski Southeast Season. 12/1/2019