Heading Into the Homestretch…

Mondays are always the worst day of the week. Today is no exception, and even worse than usual for me. It just took me only about five minutes to go through and type up the slope reports for the remaining open ski areas in the Southeast. The end of the season really is almost here. We only have five remaining open resorts in the region and six if you count Wintergreen which will hopefully open back up for the weekend, weather permitting of course. Some of them have also lost several runs from their open trail count. That is depressing.

Winterplace and Massanutten both ended their seasons yesterday. Both had a pretty good year and Winterplace was even able to close with all of their trails open. That’s always a good way to go out. Even more impressive was the fact that Massanutten only received 16 inches of natural snowfall this year, yet they made it all the way until March 20th. That goes to show you how impressive snowmaking operations are here in the Southeast. Kudos to both resorts though on another great year.

Mike alluded to the fact yesterday that most all of the ski areas had some bare coverage and thin spots showing through, with the exception of App. I saw a trip report last night on the messageboard that made this fact all too clear. The sight of dirty spots and semi-WROD’s made me grimace.  We have had such a good winter that is a bummer to see all the snow disappearing.

On a funny note, Timberline is reporting that their backcountry is open with a 0-8" base.  Huh?  I didn’t even know it was possible to have a minimum average base depth of 0 inches.  I read that this morning and chuckled.  Don’t dig in to hard your edges I guess.

Sorry if I sound like such a downer this morning.  Everthing said, the fact of the matter is th 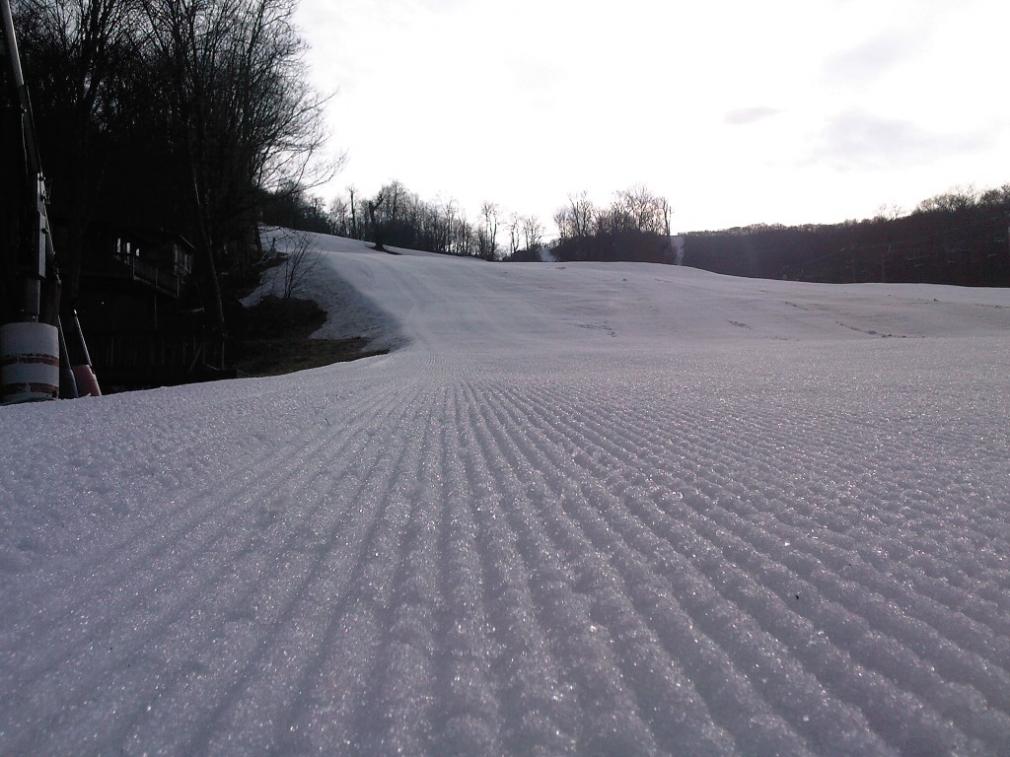 at we still do have a week left of skiing and riding in the region. I know I will be getting in a couple more days this week myself. There is still a lot of terrain to ride and fun to be had. Spring skiing and riding is always a good time. It is going to be almost 8 more months until you get to do it again so get out there while you can!

<<<There’s still some early morning corduroy to be had, as evident by this photo from Sugar yesterday morning.

Looking around the region…

Appalachian Ski Mountain – 49°- Open on 11 of 12 trails today with a groomed surface. AppalTop, the beginner’s park, is closed and I’m guessing that it is done for the season. I was there late last week and it was getting a bit then through there. Their late season rates continue to be in effect this week, their final one of the season. This weekend they will be holding the Meltdown Games. It is a fun way to end the season and I myself will probably be out there for at least one of the days. You can click here for more info on it.

Sugar Mountain – 49.5°- Open today on 14 of 20 trails with a loose granular surface. Here’s what they have to say this morning – “Though we lost a few trails including the terrain park over the weekend, open slopes especially the main slopes like Big Birch, Upper and Lower Flying Mile and Whoopdedoo have solid snow coverage. No doubt it’s Spring-like out there. A comfortable and inviting time to learn to ski/snowboard and enjoy the mountain all to yourself!”

Snowshoe Mountain – 42°- They are open on 41 of 60 trails today with a groomed surface. Here’s what they have to say – “It’s hard to believe, but the final week of the 2010.2011 winter season has arrived. There are just 7 day of skiing and riding remaining before we pack it in for another year. It’s been a great season on the mountain and Snowshoe continues to offer some great spring conditions. We have yet to lose another trail in the basin area, and we’re skiing and riding on 41 trails today, including 100% of the Western Territory. Once again last night our expert grooming team was out and about laying down some sweet corduroy. Everything but Lower Shay’s Revenge was groomed overnight, and that area should have some serious spring bumps for you expert skiers and riders to enjoy. Elsewhere on the mountain we continue to see great snow coverage on the majority of terrain. A thin spot or two has developed, but nothing that will impede great skiing and riding.

What may dampen our spirits just a bit this week is Mother Nature. It doesn’t look like she wants to cooperate with our celebration of the end of another great season. We’re hoping the forecast will straighten out during the week ahead, but we may have to deal with some "under developed snow" throughout the week. Yes, that means we may see some rain. But the silver lining it that most of that weather clears out by Friday and we could have some great weekend weather, including the outside shot of a snow shower on Sunday. What a way THAT would be to end the season! But don’t forget, while rain isn’t anybody’s favorite ski forecast, it doesn’t mean the snow won’t be in GREAT shape. The snow will be soft and carvable. Just grab that waterproof outer layer and some goggles and you’re good to go.

And best of all, you can ski and ride TOTALLY FREE THIS WEEK! That’s right; purchase any lodging stay between today and the end of the season on March 27th and your lift tickets are absolutely FREE! Can’t get away for an overnight stay? No worries! We want you to help us celebrate the great season we’ve had at Snowshoe, so we’re offering $26 lift tickets for anyone who just wants to come up and ski or ride for the day. Additional resort discounts this week include lodging starting at just $125 a night (that’s $32 a person for lodging and lift tickets for you and three friends), up to 50% off at our retail outlets, great savings on rental equipment and Last Hurrah deals for our exciting adventure activities. For complete details check out snowshoemtn.com or call 877-441-4386. This Saturday, March 26th we’ll host our annual Last Hurrah celebration, complete with pond skimming contest, great tunes from DJ Judd, a survivor’s party at Moonshine pub and great prizes. So don’t put those skis or board away just yet, head up to the mountain and get in those last turns of the season FOR FREE!!!

Wisp Resort – 55°- Open on 15 of 32 trails today with a groomed surface. Lift tickets are just $29 today and they will be having tubing tonight from 5-9pm.

Wintergreen – 43° – They are closed this week and plan to re-open Saturday for a final weekend of skiing and riding, weather permitting.

Timberline – 41°- Open today on 30 of 39 trails with a granular surface. This coming weekend they will be having the Locals Cup and other closing weekend festivities