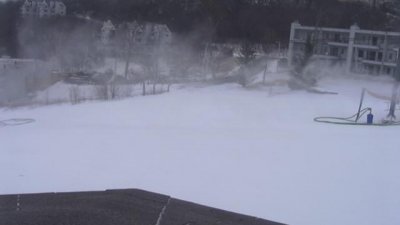 Happy Valentine’s Day to you all, especially to my lovely girlfriend! I wish I could tell you that it’s a beautiful morning and that we’re going to see perfect weather on this special day, but unfortunately that is not the case. Bummer!

Temperatures around the region this morning are pretty uniform. That hasn’t happened a lot this year so it’s interesting to see. Everyone is in the 28-33 degree range this morning so it’s pretty chilly out there. Not everyone made snow last night but that’s not a big deal since we have seen several days in a row of snowmaking with some natural snow on top of that. 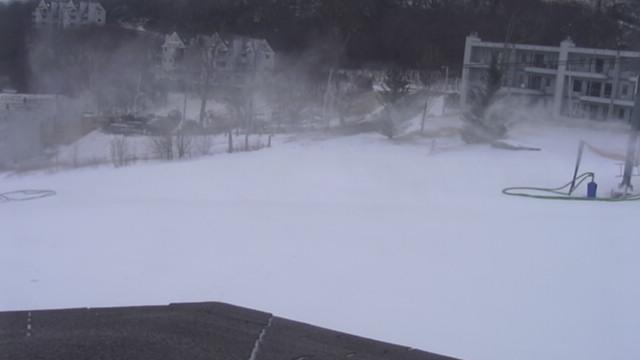 <<< Sugar was making snow this AM on Big Red.  Condtions on that slope have improved DRASTICALLY over the past several days.

Conditions have significantly improved since last week. I experienced this firsthand last night at Beech as my coworker and I headed out

there for the night session. It was one of the more fun night sessions I’ve had this year. Last week I went out there and visibility was TERRIBLE, so last night was pretty awesome. Snowmaking was going on but I could see where I was going, which is always a good thing right?

Robbins Run in particular was fun. There were a few areas with soft snow and a couple of the rollers were fun to boost off of. Southern Star had some MASSIVE mounds of snow. That run is closed today so I’m wondering if they are grooming things down and spreading out the snow.

I realized last night how out of snowboard shape I am. I haven’t ridden a lot this year and my thighs were burning after only an hour and a half or so. That is pretty sad. I need to work on that. There has only been a few times this year where I’ve ridden for more than a couple hours at a time. Most of the time I’ve gone riding this year it’s been at night and I only stay for a little bit. I’m not a huge fan of night riding in the first place. That’s why I’m pretty stoked to ride on Monday as it looks like the snow should be good and the sun will be out. I’ll talk more about that later this week…

As for the next few days, it looks kind of bleh. We might see some sunshine tomorrow afternoon but in general it looks as if clouds and underdeveloped snow is in store for us until Friday. The good news is that the resorts are in the best shape they’ve been in all season. Base depths are looking good and trail counts are fairly high also. Most places are at or near 100% open, which is pretty amazing considering the weather this year.

It’s been awesome to see the transformation in conditions over the past several days. For instance, Canaan Valley has tripled their open trail count. Last week at this time, they had 13 open runs. Today they have 35!

It’s still winter and there is still lots of skiing and riding to be had. Don’t forget that!

Alright, I’ve had it posted on the messageboard for a week or two now, but I will “officially” announce it on here I guess. The 5th annual Ski Southeast Summit at Snowshoe Mountain is slated to take place March 2nd-4th! This has become a pretty big event and many people look forward to this every year. Here are the main details thus far.

-25% off lodging for the weekend
-FREE Sunday lift tickets
-A select group of people will get First Trax on Saturday and Sunday. This involves Snowshoe allowing us to ski and ride 30 minutes before the mountain officially opens to the public.
-The same group of people will get a tour of the snowmaking plant and equipment at Snowshoe.
-An après ski party will be going down on Saturday
-There are all kinds of events going on that weekend as part of Mountain Madness weekend at Snowshoe. Events include beach volleyball, a snowboard comp, and live music.
-We also might be giving away a season pass to Snowshoe for next year. We’re still working on that so stay tuned…

This is going to be a pretty sweet event and I think it will be the best one thus far. Mark Glickmann and I are pretty pumped about it. You should be too! After all, it’s always fun to get discounted lodging and free skiing! You have to be a member of the messageboard in order to get these deals so make sure to head on over there and register ASAP! Reservations must be made over the phone and when you call make sure to give the Ski Southeast discount code “SNOW” and give them your messageboard name. We’ll be distributing Sunday lift tickets that Saturday night at the après ski party. More info can be found by CLICKING HERE.