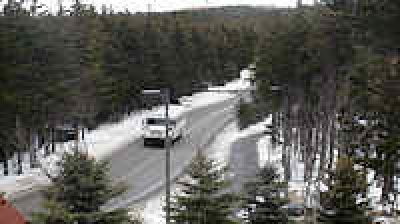 First I have to say thanks to Frank DeBerry, Mark Glickman, Erin Baldwin and their crew up at Snowshoe Mountain for being terrific hosts for me and my crew this past week. You guys know how to do things up right! Thanks so much. I’ll expect my "snow commission check" in the mail as I (somehow) brought 8" of snow with me while my people were there! Snowshoe is expecting more snow today through Wednesday.

According to the NWS they could see some substantial snowfall today and Tuesday with as much as a foot of snow falling. Here’s a glimpse of the forecast for the Pocahontas County, WV resort through Wednesday.

Frankie the Mamoose is working! 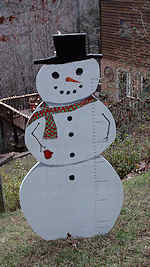 If you guys will remember – on Christmas Day I and my youngest daughter erected a new snow-promoting snowman to replace the old worn-out snow girl that we’d been using for years. Long time readers will attest to the fact that every time we’d get that thing put up – it would snow within 7-10 days. We got the new one up and three days later we saw 5" of snow at Snowshoe.

It’s been 8 days since we put it up and according to the weather forecast most of the mountain communities (even here at home around Banner Elk) should see 1-3" of new snow tonight.

You guys can say what you want – but I’m taking credit! I’m not even entertaining your complaints as to anything otherwise. There must be some magic in that wood!

COLDER THAN A WELL DIGGERS A**!

It’s so nice to be able to talk about some REALLY cold temps happening out there in SkiSoutheast-Land. While the West Virginia resorts were getting some unfair advantages with even borderline snowmaking temps over the last few days, some of the ski areas into Tennessee, Virginia and North Carolina were enjoying tennis weather on Sunday afternoon with a high temperature of 59°!!! Kenny, where were you dude? Of course HAD we played tennis on Sunday, we’d have had trouble keeping the ball on the court as winds were blowing in the 20-40 mph range!

Our www.SugarMountainWeather.com weather station reported a 29 mph wind gust at 12:32am this morning. Beech Mountain reported a 21 mph wind gust just moments ago! Snowshoe Mountain is forecasted to see some 40 mph winds today. Hold onto your helmet if you’re approaching the top of Ballhooter this morning! If you’re not careful you’ll end up in the Village shoppes from being pushed around!

The forecast is calling for GREAT SNOWMAKING ops through Thursday and things should look a LOT more winter-like around the ski communities of the Southeast. 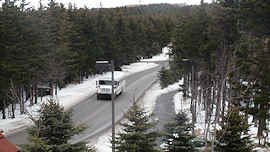 <Snow everywhere at Snowshoe Mountain! This was taken from Loggers Run

As I was preparing to leave Snowshoe on Sunday (SNOWSHOE SNOW) I snapped this photo from outside my lodging window and couldn’t help but think that it sure would be nice if we can get a snowy bit of ambience at ALL of the ski areas of the region. I have to admit that it was great getting that during our trip but it would be even better for all concerned if ALL of our resort areas could get some nice winter-weather.  My snow-loving brothers in NC, VA, TN and Maryland would appreciate it!

IS THAT GOING TO HAPPEN FOR THE REST OF THIS SKI AND SNOWBOARDING SEASON?

The answer is "NO" if you listen to all of the weather gurus out there. They’re all forecasting a continued CHALLENGE for most of the Southeast and mid Atlantic in terms of getting natural snowfall and snowmaking temperatures.

I’m not buying into that as a DONE DEAL though because last season most of the weather experts were not calling for a snowy winter at all. After a fast start to winter, last season, most jumped on the band wagon and started talking about the coldest winter on record and much more snow, etc. Then about the time the damn groundhog stuck his head out on February 2nd or so, it stopped and we had a terrible finish to the season.

So I don’t know why we should all just automatically buy in to the theory that they’re all espousing right now. I say, let’s ALL THINK SNOW and COLD a take it one day at a time. As for me, I’m thinking we’ll see some good snow in January!

I’m predicting a wonderful year for every one of you! I’m not much into making New Year Resolutions. I never have done that sort of thing. However I am this year. Here’s my short list:

1. Ski every ski area in the region in the same year. (I try to make the rounds, but don’t get to all of them each year.) This year I will ski all of them.

That’s it for me.

Due to numerous factors, including a lack of cell and internet connectivity during my trip this past week, I missed hooking up with my buddies Joe Stevens and Ed Galford. We talked a few times, and just each kind of zigged when we were meant to zag. We’ll do it sometime in the next few weeks.

Thanks to TheKenDog for handling the snow reporting during the last part of our trip. I’m handling things for Kenny today and he’ll be back with you guys on Tuesday AM.

Here’s the notables for today! Check the SNOW REPORT for all the details.

Appalachian Ski Mountain – 21° – They are back to six trails open this morning as they are reworking some features on several trails. That trail count could change throughout the day as snowmaking continues as well. They have ice skating open as well.

Cataloochee Ski Area – 17° this morning and up to 11 trails open for day sessions only on Monday. They are inching their way up to being fully open.

Sugar Mountain – 14.1° and 9 trails open with tubing and ice skating open as well.

Wolf Ridge – 22° – 3 trails open for day sessions and tubing is open as well.

Sapphire Valley has their tubing hill open and expect/hope to open the skiing terrain on Saturday, January 7th.

Massanutten – 23° – Making snow on 8 trails but only have ONE open for day sessions today. Tubing is open.

Wintergreen Resort – 19° – Operating update from Wintergreen: We will operate for DAY SESSIONS ONLY through 1/03. Winter is back allowing for round the clock snowmaking into Thursday. Night skiing and riding will resume Wednesday 1/4, please keep checking this report for updates. The Plunge will be closed for intense snowmaking beginning through thursday, reopening Friday 1/6.

Canaan Valley – 17° – They saw .9" of snow (nearly one inch officially) according to David Lesher’s weather center. That’s is a great way to start the New Year! They have 8 trails open with two of those being black diamonds. They also have ice skating and tubing open as well.

Snowshoe Mountain – 13° – 3" of new snow and more is on the way! Mark Glickman wrote, "The temperatures have dropped and the guns are on! We received three inches of natural snow in the last 24 hours and there is more in the forecast on its way. Our snowmaking team has moved guns to the Western Territory on Cupp Run and are also focusing on additional expansions at the Snowshoe and Silver Creek areas. We have 100 acres of the best conditions in the region including the most park features around!

Coming up this weekend we have our annual Burton Women’s Camp – a camp designed by women for women to push your riding to the next level and meet some great people along the way. Discounted tickets and lodging available as part of the package."

Winterplace Resort – 22° – They have 14 trails open for day and night sessions. They posted, "Open to the Top of the Mountain with something for everyone from beginner to expert! Check back for up to date information! Snowtubing currently closed – please check back for opening date."

Here’s an oddity when you factor in that Ober hasn’t opened yet for the season. (Shows you how nuts this winter has been so far! Here’s a press release that was posted back in October via Trip Advisor for the Smoky Mountain Ski Resort.

Gatlinburg area was voted the #2 for Winter Ski Vacation Rental Destinations in the US!

Located in the heart of the Great Smoky Mountains, Gatlinburg offers plenty of cold weather fun including skiing, snowboarding, and ice-skating at Ober Gatlinburg. Travelers could save up to $700 by staying at a vacation rental for a weeklong trip.

Hopefully we’ll see some cold air and snow the rest of the way, right!?!?!

Previous Post
Happy New Year!
Next Post
Click to Enlarge this Photo Taken Along Snowshoe Road on Sunday AM! Lots of snow Everywhere and MORE is on the Way!