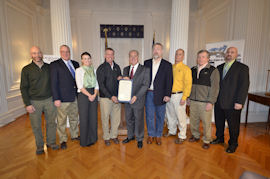 (Charleston) – Governor Earl Ray Tomblin and officials with the West Virginia Ski Areas Association today announced that January was officially Learn to Ski and Snowboard Month in the mountain state. By proclamation released at a news conference held at the state capitol, West Virginia joined the national program that includes ski-industry states in North America.

The Learn to Ski and Snowboard Month, started by a group of industry officials in 2007, encourages children and adults to try to ski and snowboard if they never have done so and also encourage those already involved to try a new way of having fun on the slopes. You can find out more about the program by going to www.skiandsnowboardmonth.org or www.goskiwv.com .

Annually the association’s five alpine resorts, Canaan Valley and Timberline in Tucker County, Oglebay Resort in Ohio County, Snowshoe Mountain in Pocahontas County and Winterplace in Raleigh County, and the association’s two nordic areas White Grass in Tucker County and Elk River in Pocahontas County experience nearly a million skier visits. The economic impact from the five-month long industry is over $250 million, employing 5,000 on and off the resort properties.

The 2011-2012 season has picked up recently after a slow start for West Virginia’s resorts due to early season mild weather conditions but last week’s large amounts of natural snow and large Martin Luther King Holiday crowd have turned the situation around. “We received over a foot of snow last week and that helped create awesome conditions on the slopes,” says Terry Pfeiffer, President of the West Virginia Ski Areas Association and Winterplace Ski Resort. “Along with the snow came much needed cold temperatures allowing all of the resorts to make snow around the clock.” West Virginia Ski Resorts have invested millions of dollars in snowmaking equipment which assures skiers and snowboarders in the region reliable conditions.

To find out more about West Virginia winter sports programs go to www.goskiwv.com and click on a resort link.

Previous Post
Snowshoe’s 72 Hour Only Sale…Stay Two Nights in March, Get the Third Free!
Next Post
Beech Mountain Resort Offers Some Great Incentives to Learn to Ski! Click to Enlarge!