FIRST TURNS OF THE SEASON 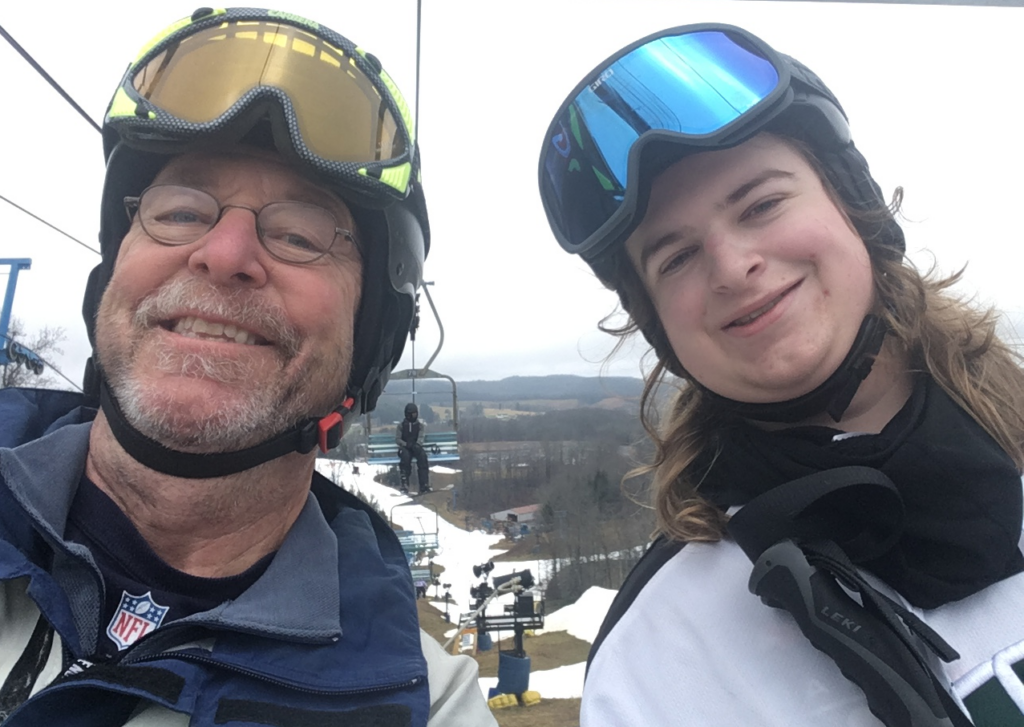 Story and Photo by Joe Stevens

These first turns were a little bit more special as they came with my son, who is home after finishing up his first semester at Ohio University. I am now riding the lift with a future meteorologist and a darn good skier to beat.

As I look back at some of the more memorial first turns of the season, I think of those first wedges I made at Massanutten Ski Resort in Virginia on January 1, 1985. I had no idea what I was getting myself into, but years later I am so thankful my roommate at the time convinced me to give the sport a try. I have never looked back.

I also remember Thanksgiving week of 1990, my first season as Communications Director at Snowshoe Mountain. I remember the rope dropping for the season and thinking, wow, I am now getting paid to ski, life is good.

Then there was the first turns in 1997, again during Thanksgiving week, when we featured a skiing turkey for the first turns and the footage of the bird skiing was aired on The Today Show, Weather Channel and ESPN Top Plays of the Day. Heck of the way to get the word out about the start of a season. By the way, the theme was, “The one that got away, was seen skiing at Snowshoe Mountain in West Virginia. Don’t tell anyone, but the mascot was the Hokie Bird from Virginia Tech. Hey, airtime is airtime.

Then there was the first turns in 2000. It was one of those beginnings that you just want to forget, because it never happened during the traditional Thanksgiving holiday. In fact, it didn’t happen until right around Christmas. I will never forget on December 22, my wife and I decided to go to an afternoon movie in nearby Elkins and low and behold, there are probably 20 other Snowshoe employees in the theater seeing the same movie. As the saying goes, misery loves company.

Then there was 2015 and the first time our son decided to give the sport a try and learn to ski through Hurricane Middle School’s Ski Club at Winterplace. Even though the first turns that season weren’t with him, it was the first turns for yours truly in nearly two years, as my first hip replacement put me on the shelf for a bit. Before the school showed up to the resort, I went out on the mountain with long time industry friend Tom Wagner and found out that I could once again have fun on the slopes. Then later that evening I watched my son make his first ever turns outside of a lesson and he hasn’t looked back.

Through his years in middle and high school, it seems like the season’s first turns have occurred in conjunction with the two school’s ski clubs. Having him home for the holidays and still being able to get together and go down hill was again very, very special. Full discloser, I came in way before he did. Hey, I had to scribe this week’s column didn’t I?

Last month when snowmaking operations began at resorts throughout the southeast, mountain operations here at Winterplace turned 40 million gallons of water into snow. Folks that is a lot of snowmaking and the proof is what is still out there after the recent mild spell went through the region. When the ropes dropped Saturday morning, 16 slopes were available, including acreage from top to bottom.

To be honest, the mild temperatures worked on the base a bit and the surface was a bit soft, but there was plenty of coverage. Incoming colder temperatures are going to help a lot with the all important holiday period coming up for all the resorts in the region.

When I mentioned to my son about the possibility of making some turns at Winterplace, he quickly went to the snow report and was pleasantly surprised that they were going to have over half of the terrain open for the first day. To quote him, “Mr. Tom texted me that they had pumped 40 million gallons of water for snowmaking purposes. Wow, I am really impressed. He wasn’t kidding when he told me he thought I was going to be impressed.” Author’s note, Mr. Tom is the same Tom Wagner mentioned earlier in the column and somebody who appreciates a young person’s keen attitude for the sport.

So often, when a resort opens for the first turns of the season, if there are a handful of trails open, you are hoping that more are opening quickly. At least in West Virginia this year, when Snowshoe, then Timberline, then Winterplace opened, trail numbers were in double digit figures.

Throughout the southeast, ski resorts, when they have had the opportunity, have flat out made some snow this year, which produced plenty of smiles for those first turns. Now all we need is the weather to make a bit of a switch and those guns will be going again. Thank goodness the best groomers around reside in the southeast.

First turns, always a chance to create memories. Don’t miss out on your chance if you haven’t already.

Previous Post
With 14 Days Left Until Christmas, Old Man Winter Better Get His Stuff Together!
Next Post
A Little Bit Of Snowmaking For A Couple Of Resorts Highlight Monday