By Connie Lawn and Charles Sneiderman 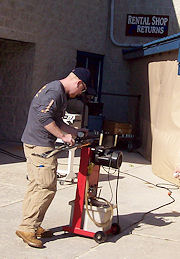 The day could not possibly have been more glorious! The sun was shining, the temperature in the 70’s, and the grass was green velvet. The trees were a mixture of green and some gold and red, but have not yet reached their full colors. The slopes and terrain parks were landscaped and prepared and the buildings and equipment clean and spiffy. On the golf course next door (now owned by Liberty), golfers were playing in the sunshine in their shirt sleeves. It is a strange feeling to be riding down the ski lift, looking at the slopes and golf course underneath, and viewing the fields, farms, and Gettysburg battlefields in the distance. This is the closest experience to a movie set you can have, without the boredom of waiting for hours for a scene to be shot.

The Fall festivals are great ways to usher in the approaching season, and everyone was reminiscing about last years’ blizzards. Several hundred families visited today and many purchased season passes or discount advantage cards. 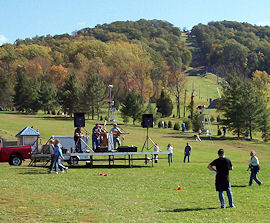 Stoney Creek also does outdoor tunes. Is that "Chilly Winds" or "Chili Winds"?>>>

It was good to hear Stoney Creek bluegrass band and enjoy Chef Dwayne’s Yankee version of North Carolina barbecue (pulled chicken) on the outdoor deck. It reminds you that Liberty is just a few miles north of the Mason Dixon line and from the top of Liberty Mountain you can see the Gettysburg battlefields. For the teens the climbing tower was extremely popular while younger children were drawn to the pumpkin decorating and scarecrow stuffing. Adults were busy getting their skis tuned for free, voting for the hottest chili in a cookoff to benefit local charity and then cooling it off with a tasting of local microbrews. We witnessed the strange sight of adults walking through the resort, carrying skis in one hand, and a large stuffed scarecrow in the other and they were sober! Liberty has always been full of whimsy and personality!

Liberty Mountain Resort and Conference Center attracts many visitors from across the world because it is the closest ski area to the Nation’s Capital. Last year, Mrs. Obama , her two daughters, and some of their friends had a great time skiing at Liberty. But the resort is also a close knit, extended family, serving the local communities. 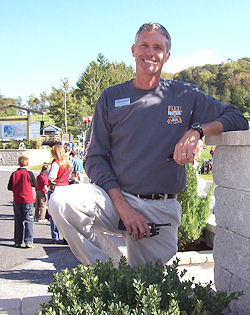 <Eric will have a busy year. In addition to being general manager of Ski Liberty, he is now chief operating officer of SnowTime, Inc. which also runs SkiRoundtop and SkiWhitetail.

On an occasion like this, we were delighted to sit in the sun with Snow Time Chief Operating Officer Eric Flynn, Marketing Director Anne Weimer, and many other friends. Many of the instructors are gearing up for their programs this year with skiers and snow boarders of all abilities, with a growing program for adaptive skiers including wounded warriors from the nearby military hospitals.

It is hard to predict the snow fall this year. If anyone has forgotten last winter, make certain to pick up a copy of their magazine “Peak Season.” It has incredible photos of the effects of the blizzards at the three Snow Time areas – Liberty, Whitetail, and Roundtop. The only problem in such a blizzard is getting there, which is why it may be best to arrive early and stay in one of their two hotels overlooking the slopes. Then you can have an uncrowded mountain of deep powder, if it happens again.

There was so much snow last year, the Baltimore – Washington airport had to put out an emergency call to Liberty to send snow groomer machines to remove snow around some radar equipment, so BWI could open a bit earlier than some other airports. Charles and I were some of the flyers who benefited- we had been stranded in Salt Lake City for a few extra days. Believe it or not, the Utah resorts had less snow last season than we did here, but we made the best of our time there!

This year Liberty hopes to open around the third of December, but no one really knows. Last years major storms began on December 19th and hit again in February. At this writing, there has already been some snow in Colorado, Vermont, and West Virginia. So keep those skis and boards waxed – it could happen anytime!

A view of Ski Liberty riding the quad chair down. Hopefully you don’t get that ride during the season unless you are an employee! 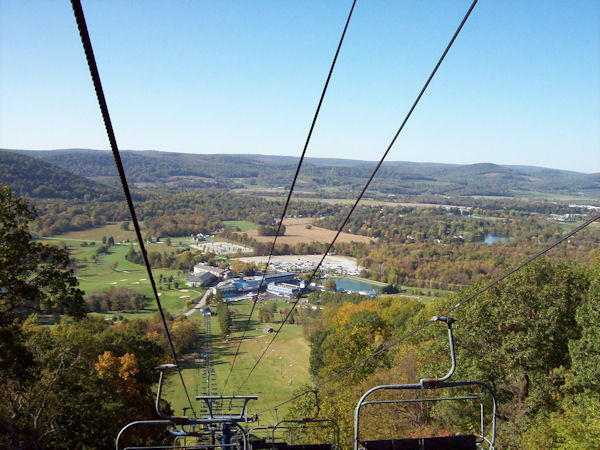 Previous Post
Jack the Woolly Worm won 1st Place in this past weekend’s WW Festival – see more in the story below
Next Post
JACK THE WOOLLY WORM SAYS IT WILL BE A GREAT WINTER!!!