We cover those subjects and more today. Read on.

After wrapping up posting the snow report updates for all of the ski areas at 9am, I’ve decided to post ONE morning update that will run both on SkiSoutheast.com and our sister site of SkiNC.com. I have a nine year old who is dealing with a case of pneumonia, after being diagnosed with Swine Flu two weeks ago, so I was a bit late getting to the news and updates this morning. Add to that the fact that a few ski areas had not updated their own conditions so I had to place a few more phone calls than normal and Voilà! I’m running a bit late posting the news.

…and there’s plenty of news to share so let’s get to it.

Several people emailed us about the new SkiSoutheast.com Snow Report page. It even helps us to get a quick glance of how things shape up from north to south across the region. It’s easy to spot where the cold temps are, snowmaking and natural snowfall – all in one location.  You can get to the Snow Report page from any page on our website or by clicking here: Snow Reports

Speaking of snow, Canaan and Timberline both reported one-half inch of new snow as of 7am this morning. That came from the official snow measuring service provided by David Lecher. (Thanks David! For the record, he does not work with either Canaan or Timberline resorts.) 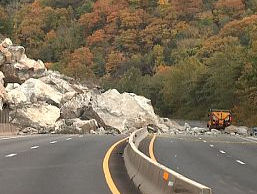 Most people have previously heard or read our reports about the October 26th rock slide that took out I40 as you travel from Tennessee to North Carolina.

Well now we can add Hwy 321 north of Lenior going towards Blowing Rock to those roads blocked due to rock slides.

The good news is that the Hwy 321 blockage will be cleared within a couple of days.

The NCDOT has released the following update about the 321 blockage.

US-321 CLOSED IN CALDWELL COUNTY, NORTH OF LENOIR

Due to the threat of a rock slide, US-321 is closed between Kirby Mountain Road and Waterfalls Road in Caldwell County, North of Lenoir.

Motorists are advised to follow the signed detour in place.

That detour will basically take you to Hwy 18 into Wilkes County to Hwy 421 and then into Boone. Once in Boone those who are wanting to go to Appalachian Ski Mountain will need to turn LEFT on Blowing Rock Road and travel 5-10 minutes to App.

Hwy 321 has been undergoing a HUGE transformation for the drive between Lenoir and Blowing Rock and during some blasting last week, some huge boulders that were not expected to fall – did!
Engineers are concerned about large boulders that are loose on the side of the road. Department of Transportation officials say the road could be closed for several days while officials drill in the area.

U.S. 321 is a main route between the Charlotte area and Appalachian State University, Blowing Rock and ski resorts in the northwest mountains.

That should only be an issue for THIS WEEKEND.

Both directions of I-40 are closed between Exit 20, West of Asheville in North Carolina, and Exit 421 (I-81 Interchange) East of Knoxville in Tennessee due to a rock slide at mile marker 2.6 on I-40 in North Carolina. The road is not expected to reopen for several months.

Motorists can access Asheville via I-40 from the east and I-26 to the north and south. Exits 20 and 27 on I-40 provide access to popular destinations west of Asheville.
In Tennessee, Exits 432 through 451 are open to local traffic.

For a map of detour routes and the affected road closure, please click here to download a PDF map

Here’s the Resort Tour Today and we take you from North Carolina North today.

33° – Appalachian Ski Mountain – They’ve dropped "Candied Appal" and "AppalTop" from the trails that were open on Monday. That makes for 7 of 11 trails open for Tuesday. They also dropped their reported base depths from 18-48" on Monday to 12-20" today. Apparently one of App’s nightwatchmen had posted that base depth incorrectly and once App became aware of it, they corrected it. 12-20" is good!

Appalachian also posted their own recommendations for travel:

31° – Sugar Mountain – They are open to the top of the mountain with 6 of 20 trails and a reported base of 12-36" of loose and frozen granular conditions. They are open for night skiing as well as ice skating. It’s 31° at the summit of Sugar and 37° at the base.

Don’t forget that SugarFest kick starts the winter season with a weekend of pure winter fun at Sugar this weekend! Sponsored by the Village of Sugar Mountain Tourism Development Authority (TDA) and hosted by Sugar Mountain Resort, SugarFest will be held December 12th and 13th, 2009.

25° – Massanutten Resort is making snow on SEVEN trails this morning and preparing to open perhaps tomorrow or the next day.

27° – The Homestead is making snow as well and plan to open ASAP.

23° – Canaan Valley is making snow and they also received a little over one-half an inch of snow in the last 24 hours as the snow system that is DUMPING on areas up north is leaving a little natural snow around WV. Canaan has tweaked their intended opening date now to December 12th. They’ve now received 22.4" of snow on the season! 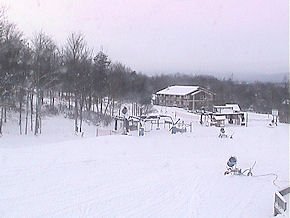 23° – Timberline Resort – You can literally ditto the Canaan report as Timberline has now decided to open Dec 12th as well and they’ve been making snow nearly around the clock and reported nearly a FOOT of snow from over the weekend!

25° – Snowshoe Mountain is reporting 25° at the summit and 30° at the base but they are not reporting any snowmaking going on the AM. They will restart as temps allow so there’s probably some wet bulb issues or something of that nature happening. Their forecast calls for a chance of snow today, tonight, Wednesday and Thursday with the high Thursday, Friday and Saturday expected to be in the low 20s with lows in the single digits and teens.

Laura Parquette writes, "Today we’ll be operating with the same available terrain as yesterday, with 6 trails and 2 lifts open 9am-4:30 in the Basin area. We don’t currently have snowmaking occurring, and it may be tomorrow night until our guns are back at work. The forecast for the next two days is somewhat hard to predict. We may see some snow, sleet or rain, or some combination. But tomorrow night, some very cold weather returns to the mountain, including temps in the single digits Thursday night. That should mean some GREAT snowmaking across the Snowshoe and Silver Creek areas, with hopes of opening additional terrain for the coming weekend. Snowshoe has been very lucky this season. While areas up and down the East Coast have struggled, Snowshoe has been able to make an impressive amount of snow already this season, and the weather appears to be cooperating for the foreseeable future. That should mean a great lead up to the Holiday period, one of the busiest times at the resort. Some availability still remains, so why not start a new family tradition this year and spend the Holidays with friends and family enjoying the #1 resort in the Mid-Atlantic and Southeast!"

You heard her…BOOK TODAY! I and my family will be at Snowshoe for the Christmas to New Year period and we’d welcome making a few turns with those of you who are there.

29°- Winterplace Resort – They are making snow whenever possible and plan to open December 11th. 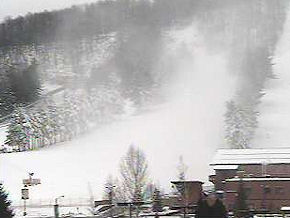 28° – Wisp Resort is making snow and looking better and better as they prepare to open possibly on Thursday. Stay tuned for that announcement.

View of Wisp making snow this AM>

41° – Ober Gatlinburg is the warm spot this AM and they are waiting on some cold temps to return and plan to open ASAP.

LOTS OF PHOTOS AND VIDEOS WILL GO ONLINE TODAY SO CHECK BACK!

Be sure to click over to www.SkiSoutheast.com to see who else had snow and how much! You can check the snow reports for all of the ski resorts of West Virginia, Virginia, Maryland, Tennessee and North Carolina via https://www.skisoutheast.com/skireports.php  as well as videos, photos and more.