Counting Down Until Opening Day I hereby declare that the official countdown to ski season has begun.   You can tell your friends theKENDOG (that’s me) said so.

October is here people!  I can’t believe the ski and snowboard season is right around the corner.  It seems like I was just writing my final article of the 2013/2014 season.  The offseason has flown by, and I’m admittedly not completely in snowboard mode yet.  I will be come Friday though as that is when I’ll put my jet ski up for the winter.  No more lake time means I’ll quickly be feening for some powder.  I’m getting in that mode rather quickly already as I’ve found myself watching a bunch of snowboard trailers, teasers, and movies over the past several weeks.  I’m also looking at getting some new bindings so I’ve been shopping around on the interwebs for those and my buddies and I keep talking about making a day trip to Liberty Snowflex.  We better get on that soon because if you think about it, the Southeastern ski season is basically only 5-7 weeks away.  Yup, it’s that close! 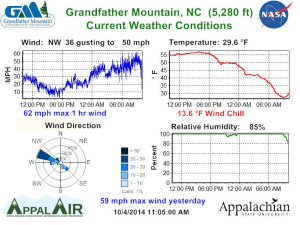 The folks in the North Carolina and West Virginia mountains had their first taste of winter, yes I said winter, this past weekend.  There was word of some flurries/light snow up at Snowshoe and some of the temperature readings I saw on Grandfather and Beech Mountain this weekend looked more reminiscent of December, not October.  Check out the reading from Grandfather on Saturday morning.  They had a wind chill in the teens!  Crazy.

With the cooler temps comes the brilliant foliage that the Blue Ridge Mountains are known for.  My Twitter timeline has been lit up with TV meteorologists retweeting images of the colors.  I don’t think the mountains in our region are at peak condition yet, but it’s getting pretty close.  Many people off the mountain don’t realize just how early the leaves change color in the higher elevations.   There’s really only a couple of weeks left for peak viewing.  I’m headed up to Boone/Beech Mountain this weekend to take in the scenes myself.  Hopefully the weather cooperates for my trip since it didn’t last year.  Below is a guide that Brad Panovich posted that shows the average peak time for colors in the NC Mountains. 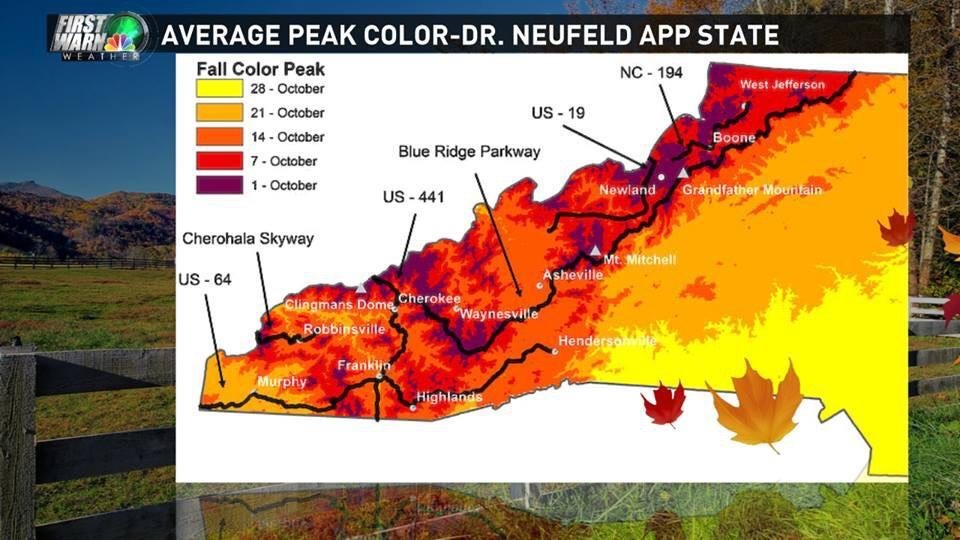 If you’re reading this article, then you’ll notice that things look a little different around here.  We just got done revamping the site.  It had been two years since the last iteration, so it was time.  The move didn’t go quite as smoothly as we’d hoped, but we’ve just about got things right now.  In particular, the messageboard was a PAIN to move.  I didn’t realize how large it was until I saw that there were almost 275,000 posts over the course of 10 years.   Luckily, we didn’t lose any of that info.  If we had, I’m sure I would have heard it from some of the longer tenured members.  If you haven’t joined our community yet, CHECK IT OUT!  Here’s a link to the board and one to the registration page.

In addition to the new messageboard format, the snow report page has been overhauled, as have the individual resort pages.  The site also looks wayyyyyyyyyyyy better on mobile and tablet devices.  Like way better.  In general, the new look Ski Southeast should be good to us over the next couple of seasons.  I’m stoked!

While I’m at it, here’s a quick little plug for the still relatively new Resort Cams site.  It’s been revamped since last season as well.  Before you dive in, make sure to read THIS ARTICLE first as it explains some of the new features and functionality of the site.  I think you’ll like that site as well come the first snowfall of the year.

I’ll finish up with a couple of quick notes.  Beech Mountain Resort is currently selling unlimited season passes for $400.  That is probably the second best season pass deal you can get in the region, only behind Snowshoe’s Ridiculous Pass.  They’re only selling 200 of these though, so make sure to get one ASAP.  Beech has really done a great job over the past few offseasons in terms of upgrading the mountain.  They’ve done everything from increasing snowmaking to re-doing the bathrooms.  Stuff like that makes the $400 pass an even better deal.  Read more about the deal at the link below.

Slopeside at Appalachian Ski Mtn., you will find everything from Skis and Snowboards to Helmets,

Accessories, and Children’s clothing, all discounted up to 70% off!

The Preseason Sale will be going on October 17th – 26th – 10 Days of great deals! With name brands like Burton, 686, Mountain Hardwear, Spyder, Obermeyer, Nordica, Roxy, Salomon, K2, Atomic, Rossignol, Volcom, Never Summer, Ride, 4Frnt, Line, Northwave, Gnu, Libtech, and more, you can see why the 17th Annual Preseason Sale is where you need to be!

Not to mention a 2014-15 Season Membership will be raffled off, and Appalachian will also feature a Ski/Snowboard Swap during the tent sale where you can buy and sell your used equipment (Skis, Snowboards, Boots, and Poles).

Well, that wraps up my first report of the season.  I’m looking forward to the many more I’ll be doing over the next 5 months.  So stoked!  Think snow, guys.