Congratulations to 13 year old Lindsea Lumpkin for a fabulous 2010-2011 season!

We heard from proud pop Tommy Lumpkin yesterday as he was grinning from ear to ear on muliple subjects. The least of which was summed up by this communication, "It’s still dumping like crazy here in Frisco (Colorado) and schools are doing a late opening today and it’s almost May. We’ve had over 500 inches this season!" 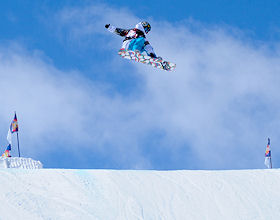 Of course the thing that has Tommy beaming and the root cause for symptons that include an over-inflated, puffed out chest – is the fact that 13 year old Lindsea, who is sponsored by (among others these days) SkiSoutheast.com.

During the just-wrapped-up 2010-2011 competition season Lindsea rose to as high as 44th in the National rankings. She won all 5 events she competed in at the USASA Rocky Mountain Series with victories including 1 pipe, 2 slopestyle, and 2 boardercross races in the Breaker Girls division.

Lindsea ended her age group career with USASA with 6 National Titles, and 19 podium finishes out of 30 tries. Pretty impressive, huh? 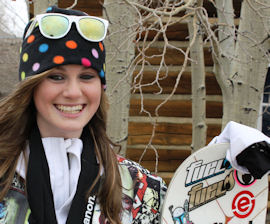 See the image to the right (enlarged) by clicking here>>>

We’ll get the complete low down on where she’ll be and how she’s doing, but the long and short of it is that she will start the 2011/2012 season in Open Class…in effect, turning pro at 14 years old!

All we can say is WOW!

Great stuff Lindsea! We’re proud as we can be and just hope you’ll remember us when you head to the Olympics in a couple of years!

Previous Post
Lindsea Lumpkin is ALL SMILES After Winning ALL FIVE EVENTS she was entered in for the USASA Rocky Mountain Series! Click for more information!
Next Post
It’s May 4th and We know you guys and gals are starved for news…