COLDER TEMPS ARE MAKING IT A HAPPIER NEW YEAR FOR SKIER’S AND SNOWBOARDERS! 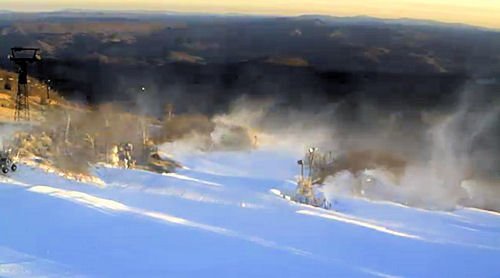 Happy New Year! …and a Happier New Year it is as ski resorts all across the region have been able to make snow and in some cases around-the-clock to add as much as 10″ to their base depths. Those snowmaking efforts have also increased the number of slopes and trails available at some ski areas.

Things are looking SOOOOO much better now with a good blast of cold air and great snowmaking across the mountains.

We’ve been reporting on the lack of natural snow in December and that’s something that the ski resorts ops don’t really care a LOT about except for the marketing value of natural snow. What I mean by that is the fact that SNOW simply excites people OFF the mountain to come up and ski. The resorts themselves count way more on cold temps to make manmade snow to blanket their mountains.

Obviously it was a very MILD December to say the least, but in terms of natural snowfall it was a WELL-BELOW average December for all of the ski mountains of the Southeast and mid-Atlantic. Case in point is what David Lesher of CanaanMtnSnow.com posted today, “This is only the second time in 14 years with zero snow on the ground on New Year’s morning.”

However, the COLD TEMPS are what’s important to resorts and their snowmaking teams and December didn’t cooperate well in terms of providing cold enough temperatures to make snow. For example, high atop Beech Mountain Resort’s 5506′ elevations it only got below freezing on 15 of 31 mornings in December. When you can’t make snow…things go downhill quickly and December was a month that saw every ski area in the region struggling to even MAINTAIN the slopes that they had open – much less be able to get more of their slopes and trails opened.

Contrast Beech’s December 2014 numbers with the fact that in NORMAL December’s Beech would have seen an AVERAGE of 20.4° EVERY MORNING and 20″ of natural snow (compared to the 3.3″ of snow that fell last month) and you can see how much of a struggle December was for ski areas.

So these last couple of days of good snowmaking ops have been VERY WELCOME and those awesome snowmakers in our region have really improved conditions and allowed for some more slope openings to make the last few days of the Christmas-to-New-Year Holiday period – BETTER.  We’d all like to see more trails open, but things are certainly better.

WHAT’S IN STORE FOR THE NEXT FEW DAYS…

I’d love to be reporting that we’re in for lots of cold and snow, but we’d suggest to get out and ski and ride today as some light rain is expected to enter the Southeast and there’s an 80% chance of rain on Saturday from Snowshoe Mountain to Wintergreen to Cataloochee to Appalachian Ski Mountain and all points in between.

The GOOD NEWS is that temps should dip back down on Monday, January 5th and maybe, just maybe we’ll see a stretch of cold and some good natural snows to get resorts looking normal with all of the trails open SOMETIME in January!
I’ll be flying back to the Tarheel state on Friday morning so Kenny Griffin will handle the Friday morning Mountain BLOG for you guys. From what I understand, he’s riding at Beech Mountain today and will probably have some news to share. In the meantime, here are some notables…

Wintergreen Resort – 18° and added TEN INCHES to their base to get to 20-40″ on 13 slopes open. They posted the BEST blog post of today with, “Life is sooo much easier when it is below freezing….   Monday is long gone with a completely new surface everywhere.  We will throttle back our snowmaking efforts on open terrain again today, spreading out and filling in weak spots.  75% of our capacity will be focused on new terrain like Tyro, Main and Progression Parks, Lower Diamond Hill, Lower Cliffhanger and Ridgelys Fun Park.  Overnight tonight, we will return to our core trails, focusing on improving the surface and building up base depths.”
Canaan Valley – 13° at daybreak. NO REPORT

Snowshoe – 14° and blasting their mountain with fresh manmade snow. They lead the region with 38 trails open (of 60) and their new webcams show off some nice conditions everywhere.

Bryce Resort – 23° and making snow but NO REPORT

Sugar Mountain – 18° and they added 8″ of base to their mountain to go to 28-66″ of manmade snow and they added another open trail to get to 12 of 21 slopes open. (Not sure about this but that COULD be the most open terrain they’ve had thus far this season.)

Appalachian – At 18° these guys can “blizzard” up their mountain and they did so within the last 24 hours and added 6″ to their base depths. App is operating with 9 of 11 slopes open and they posted, “Snowmaking will be ongoing on all slopes as long as temperatures permit today.”

Ober Gatlinburg – 28° and added 6-7″ of new manmade snow and also added one additional slope open to get them to 3 of 9 trails open.

Massanutten – 20° and they added 2″ of manmade snow and added another slope opening to take them to 8 of 14 trails open. They posted, “Pacesetter and Easy Street Terrain Park will open this morning. CMB Terrain Park and hopefully Paradice will be open tomorrow.”

The Omni Homestead – 21° and added 2″ of new manmade snow and are open with 2 of 9 slopes for day sessions only today.

Sapphire Valley – 25° and they are FINALLY able to make snow. There have been some emails from Sapphire and Cashiers fans hinting that they might not even try to make snow since they have not been able to operate much at all yet. Obviously that is not the case as they are making snow on the slopes and NOT on the Frozen Falls Snow Tubing Park as of this morning.

Previous Post
Wow! Wintergreen’s Snow Tubing Hill Looks Great This Morning!
Next Post
Happy New Year from All of Us at SkiSoutheast.com and ResortCams.com