COLD and LOTS OF IT! SNOW IS IN THE FORECAST TOO!

We love hearing from you guys! Yesterday I posted a novel and evidently there were mixed reviews of it. I received several emails like this one:

"I get my day started every day by reading your morning news of whats happenin around the ski areas and I have to admit that I can never get enough. However today’s story was kind of like dieting for weeks and then going to Golden Corral for breakfast and pigging out! Great stuff but I can’t believe I ate (read) the whole thing! Bobbi Canady, Baltimore, Maryland"

"Oh my Lord today’s news was good, but long! You guys do a great job of sharing the news from all over but I just realized that my boss came by my office three times before I could finish it! Good reporting, just don’t get me fired! Dan Blake, Greenville, SC"

You guys are cool.

LET’S SEE IF I CAN KEEP THIS SHORT TODAY (I’ve never been referred to as a "man of few words!" I’ll try to do better as we don’t want to get anyone fired!)

Instead of posting a resort tour today, if you’re interested in all the details resort-wide – visit this link> Snow Report for the Southeast and Mid Atlantic Ski Resorts

(That saved you guys and me about 20 minutes!)

We’re seeing as much as an inch of snow has fallen this morning up at Snowshoe and a TRACE of snow has fallen around Canaan & Timberline. That kind of cold and snow is in the forecast for all of the resorts as we get closer to Friday! 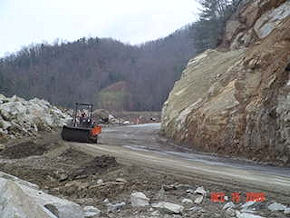 As we shared first thing this morning via our announcements, Hwy 321 south of Blowing Rock is scheduled to reopen late on Wednesday. That is great news to both skiers headed north to the High Country area ski resorts and to the resorts themselves.

Additionally, the NCDOT announced that they would not be doing any more blasting for a while to keep the highway open during the important winter tourist season.

Brad Panovich’s latest Skier’s Forecast Video provides a "Storm and Cold Alert" according to Brad. Temperatures as lows as -18° are prevalent across much of Canada. In fact Brad says that the western portions of Canada have experienced the coldest start to December EVER! That arctic cold is finally moving south towards the Southeast – slowly but surely.

The fabulous news is that Brad says once that cold air gets in here it will be locked in place for a sustained period AT LEAST through the Christmas Holidays! He shared that we probably won’t see any natural snow for the next 48 hour period but snowmaking will be at a premium through the weekend and next seven days! With that cold air in place Brad said that moisture is filtering in from the south late on Thursday. We could see some light snow flurries up into the Virginias and Maryland tonight, but the cold air is the big news through the forecast period…and Friday night is when things get interesting. According to him there are two systems headed in our direction and if those converge as Brad thinks they will, we will see a band of very heavy snow Friday into Saturday across much of the Southeast and Mid Atlantic ski resorts. In fact he’s thinking that this could be a snowmaker for areas into northern Georgia and even into the Piedmont areas of Virginia and North Carolina.

The more important news is that the temperatures forecasted for the next seven days should allow for some SIX STRAIGHT DAYS of snowmaking temperatures and THAT, my friends means a lot more terrain opening and some great conditions headed into the Christmas to New Year break. If you have not made your Holiday ski getaway reservations – do so TODAY!

One more added note about all the cold air. Twenty four hours ago we saw temps as mild as 50° atop Seven Devils. This morning? 19°!

Here’s some other comparison temps from Tuesday Am to this morning:

Several ski areas are reporting a slight drop in base depths but those will be rocketing upward as will slope opening numbers with the next week of near around the clock snowmaking opportunities.

I want to give out a hearty "thank you" to Bobby Webb, Beech Mountain Resort’s longtime mountain manager for his assistance in accommodating us in getting the new webcam running up on White Lightning. We’ve made all sorts of attempts at getting that working the way we want it and he’s been great about turning the Quad off for us to get up on the tower right at 4:45pm a few days in a row. We’re displaying a large frame image of the quad for now, but once White Lightning gets open we’ll be able to show some amazing closeups.

Several television stations have told us that they will be using these cams to show people riding up…so when you’re at Beech or App, be sure to look for those cams on the way up the chairlift and say "Hi". They are LIVE cams with no delays, so you can call home to your friends and family and let them see what they’re missing!  YOU!

Thanks also to Gil Adams up at Beech for helping our crew out a couple of days and to Peter, Meredith and staff at Fred’s General Store for being accommodating to us yesterday evening! We have that baby installed now and after a few tweaks we should be in good shape to provide even more images of the ski areas!

That’s it for today. Make those reservations today for the Holidays cause you don’t want to miss out on all the great snow and conditions!

Be sure to click over to www.SkiSoutheast.com to see who else had snow and how much! You can check the snow reports for all of the ski resorts of West Virginia, Virginia, Maryland, Tennessee and North Carolina via https://www.skisoutheast.com/skireports.php  as well as videos, photos and more.