Merry Christmas Eve fellow snow lovers! Santa does his thing tonight and I have it on pretty good authority that most of you have been good boys and girls and Santa’s going to bring us a great weather forecast for the coming days!

Looking around the state we’re seeing temps as of 8am in the 30°-34° range and there was NO snowmaking happening last night at any of the ski areas in the state. That’s okay as there’s tons of snow base on the slopes and every resort will offer awesome ski and snowboarding conditions for your Christmas Eve skiing.

We’re going to have a WHITE CHRISTMAS across all of the Southeast and Mid Atlantic ski areas. We do have some freezing rain in the forecast as well as some high winds with gusts to 40 mph in the forecast for tonight and Friday in the mountains, but once that yuck gets out of the way and Santa’s back home chillin’, then cold and snow is in the forecast and the forecast for the slopes and for your Christmas through New Year’s skiing and snowboarding is for FUN, GREAT WEATHER, COLD TEMPS AND SNOW!

There’s some light snow in the forecast for Sunday into Monday and then as we get closer to New Year’s Eve more snow is the call! Highs are expected to be in the 20s to low 30s from Saturday through the entire forecast period covering right up through New Year’s day!

So the yuck ice, freezing rain, and drizzle that is forecasted is only a temporary, 18 hour delay in our fun and it gives us all a chance to chill with the family!

We COULD BE experiencing the dangerous winter storm that is underway in the Plains states today. Travel will be impossible as Blizzard conditions are pounding Kansas, Iowa and South Dakota. Icy conditions are already beginning to plague some areas.

You can see where the warmer air with moisture is filtering northward causing slightly milder air here in the North Carolina mountains that those temps that we’re seeing north into Virginia and WV where temps are some 15° colder on average. You can see those temps and more over on www.SkiSoutheast.com ! Speaking of "seeing", the views from the live webcams are AWESOME today! I have to really thank a guy by the name of Paul Huffman who came on board our staff a couple of months back. I had all but allowed the webcams to die on the vine and he got me re-energized about them and now just a couple of months later we are showing more views than ever and a network of awesome mountain views! You can see those at www.HighCountryWebCams.com ! We are putting the final touches on an entirely new website for the cams and that should debut the week of January 11th!

None of the North Carolina ski areas made snow on Wednesday as temps were ever so slightly above the needed, near freezing numbers. There’s TONS of base depth and perfect riding conditions for today and the surfaces should be groomed to corduroy perfection for your enjoyment today. There are some changes to the opening schedules for today and Christmas Day so let’s get to the tour.

Check the Snow Report for ALL of the details but here’s quick tour and some Christmas Eve and Christmas DAY notes.

Wolf Ridge Resort is open with 18 of 20 trails for day sessions only on Christmas Eve. Hats off to Rick Bussey and his staff for providing the best snow reports we’ve seen coming from them in years! They write, "It’s Thursday morning, Christmas Eve, the sky is blue and its 34 degrees. With over 16 inches of snow and a great holiday week so far, we are having a blast at the Wolf. We have 18 of our 20 runs open and should have the Breakaway ski through tunnel slope ready soon. Our Bowl run is getting awesome publicity and the slopes are in the best condition ever. We will be open until 4:30 today and be closed Christmas day. We will reopen on Saturday the 26th with slopes groomed to perfection and ready to ride. See you on the slopes today!!!"

It doesn’t get any better than that people! So Wolfie is open today for day sessions, closed on Christmas Day and reopens Saturday! 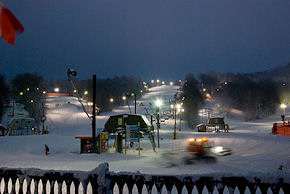 Midnight Blast Weekends Debut this Saturday, December 26th! This will mark Appalachian Ski Mtn’s first Midnight Blast ski and snowboard session. With 2 additional hours at no additional cost, this new session is their best deal for skiing and snowboarding. In addition to the slopes, Appalachian’s ski shop, gift
shop, restaurant, and rental department will provide service through midnight on these special nights. Offered only on Friday and Saturday nights, the December 26th session will be the first of 17 Midnight Blast Weekend sessions, ending on Saturday, February 20.

Beech Mountain Resort added another TWO open trails to the system today and they now offer 11 of 15 slopes and trails for day and night sessions on Christmas Eve. Lower Southern Star and Lower White Lightning are open! You can get to both from the little "Crossway" connector trail. We noticed some "s" turns on White Lightning this morning via the Beech Mountain Quad Cam!

Beech is reporting that their terrain park is open today so we’ve toggled that on within our snow report, but we’re wondering if maybe they’ve added some features on another open trails as we don’t see the dedicated terrain park trail as open on their trail map. We’ll try to get you word on that asap.

Beech is looking m-a-r-v-e-l-o-u-s this morning!

Beech reports, "The terrain park is now open with seven features! Ice Skating is open! The Beech Tree Bar and Grille will offer live music this Saturday starting at 8pm."

Cataloochee Ski Area is also 100% open with primo conditions but for day sessions only today for Christmas Eve. Then on Christmas DAY, Cat will open at 1pm and ski and ride until 10pm. So NO morning session on Friday at the Cat.

Sugar Mountain Resort is still skiing and snowboarding on 16 of 20 trails for DAY SESSIONS ONLY today and then they will reopen on Christmas Day at noon to allow their staff’s families some time to celebrate the season. Tubing and Ice Skating are also open today.

Hawksnest Tubing and Zip Lining has 20 lanes open for Holiday Tubing. Hawksnest posted, "Another beautiful day on Hawksnest Mountain, Come up and enjoy, the roads are clear. 20 lanes of snow tubing open. Zipline tours available, too.