I received a few emails this morning asking me to explain WHY Cataloochee Ski Area closed after being open this past weekend, while Sugar remains open today with what many are calling "less snow than Cat".

First, let me just say that some of you guys and gals are sooooo conspiratorial. Some of you seem to look for any and every opportunity to complain or gripe. The answer is simple. Cataloochee Ski Area would likely not have been open today if there were three FEET of snow on ALL of their trails. 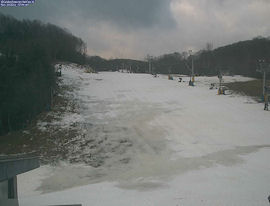 <Cataloochee is CLOSED this morning, but this is how things looked at 8am.

Cat is operating on their NORMAL, EARLY SEASON scheduling, which typically means that for the first couple of weeks of each season they will operate weekends only.

On the other hand Sugar Mountain Resort usually opens and stays open as long as they feel that there are people willing to pay the price to play on whatever snow is out there. They know that they catch a little heat for that from some people, however fans of the resort sum it up as "Gunther’s a skier and they’ll tell people at the window to go have a look at the slopes before they purchase a lift ticket. If they see it and want to ride it, then good for them and good for Sugar." 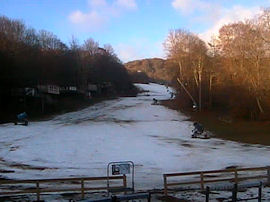 When I was writing my Sunday update, I was anticipating Sugar remaining open today. Sunday’s story was all about perspective. Today’s will include a little of that as well.

Imagine that we had a foot of natural snow on Friday. Then a couple of days of thaw took place. You’d STILL get on whatever snow was covering the ground to sled or even ski or ride it as long as there was enough snow to connect your turns down your favorite neighborhood hill, right? So what’s the difference? I suppose the argument is that to ride Sugar’s patchy snow you have to plop down $25 for a full day session or $20 for a half day. However, nobody’s holding a gun to your head. You don’t HAVE to ski there.  …and THEY DID make the snow, which costs them dearly to make.

So good for Sugar and good for anyone who just has the need for speed. For those who just need to hit some snow today – there’s some snow to be ridden. Like our buddy Joe Stevens says, "Even if there’s a ten foot base, you’re only skiing or snowboarding on the top few inches anyway."

So with that ending comment, I’ll report that Sugar Mountain IS OPEN for day sessions today with a patchy base of 5-18" with thin areas and bare spots. They are skiing from their 3/4 station which gives folks about a mile to ride top to bottom.

The daytime high temps that are forecasted from now through November 23rd look pretty mild with highs forecasted in the North Carolina Mountains around the low to mid 50s. However on Thursday and Friday NIGHTS we should see lows in the low to mid 20s, which will allow the ski areas that wish to – to make snow. Certainly Sugar and Cat will and we’ll see if any other ski areas pull the trigger.

Snowshoe Mountain has already been making snow whenever possible for their hopeful November 23rd opening day. Snowshoe has some odd twists within their forecast with high winds today, some light showers through Wednesday and then some potential snowmaking temps Wednesday night through Friday night. Thursday night’s low should be around 22°.

There’s some more moisture in the forecast around the 22nd (if that long range forecast holds) – they usually don’t. So things are a little sketchy for the next window of forecasting, but we’ll be keeping an eye on things for you guys and update you accordingly.

Stay tuned and email me if you like at [email protected]