Cataloochee Ski Area Opens for the 2013-2014 Ski and Snowboarding Season! 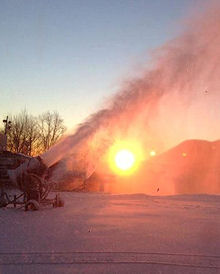 Good morning people! It is hard to believe that ski and snowboarding season is here, isn't it? Cataloochee Ski Area in b-e-a-u-t-i-f-u-l Maggie Valley, North Carolina opens for the season today and they will do it in style by going from "zero-to-6" in one day. They began making snow a couple of evenings ago and just two days and change later they now have a base of 18-36" of manmade snow covering 6 of their 17 trails. 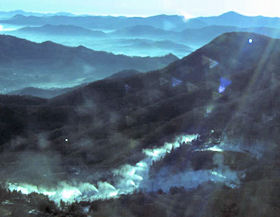 Cataloochee was making snow at 8:42am as seen on the Hemphill Live Cam. See it by clicking here!

As I was checking the snow report for Cataloochee this morning I was quickly reminded of the fact that Cat always updates their snow reports for any given day on the evening BEFORE the day they are reporting on. As much as I love Cat and their entire crew, I've never been a huge fan of that. One of the main reasons is that when all other resorts are reporting natural snowfall from overnight…it's like pulling teeth to get that kind of data for Cat. (I can't believe it is just DAY TWO and I'm already complaining! I also can't believe that we're on day two and so far I've been the reporter of record for what's happening out there around the Southeast and Mid Atlantic ski and snowboarding scene. However our new, daily Firstrax reporter and the man who will bring you the updated snow report for the entire region for most of the upcoming season is probably riding a chairlift up the slopes of Cataloochee this morning to actually film THE FIRST skier or snowboarders who get the distinction of being the first payed customer to ride at Cataloochee this season. 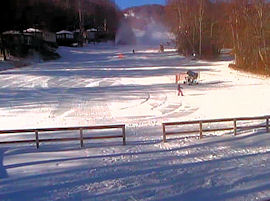 Sugar Mountain this AM…

I think Sugar Mountain threw Tim Bahlke (the newest member of our SkiSoutheast.com team) a bit of a curve by opening on Wednesday as Tim wanted one of his first "accomplishments" to be that of catching the first snow riders of the season for our region. Tim quickly learned that you always have to keep a close eye on Sugar Mountain as they protect their opening day news better than Obama and company protect your secure information on the HealthCare.gov website!

While chatting up Cataloochee, I think that one of the coolest things I've seen in recent years is Cataloochee's "One Run Refund" policy that the instituted last season. It's pretty simple really. Purchase a lift pass and go hit the slopes. If you are not satisfied with the conditions after your first run (within 30 minutes of purchasing the pass) your money will be refunded. Very cool indeed.

Cataloochee will be giving away a season pass by random drawing to someone who purchases a ticket today! If you are one of the first skiers and snowboarders to hit the mountain today…your odds are pretty sweet to win a pass that will let you enjoy the awesome slopes of Cataloochee all season long!

I reported that Cataloochee began making snow late on Tuesday when temps dipped to snowmaking range. At 1am Wednesday morning Tammy Brown posted via Facebook that the temperature was 11° up there. That, my friends, is optimal snowmaking quality temperatures.

On Wednesday morning (when I posted the first snow report of the season) I witnesses 11° temperatures up at the base of Sugar Mountain when I snapped a few photos from over there. The temperature was 8° at the top of the mountain. Grandfather Mountain, which kind of "peeks" over Sugar Mountain saw a 2° natural temp on Tuesday evening.

Again Cataloochee will be riding and playing on 6 trails as Sugar Mountain goes with their two main trails coming from the three-quarter station. That's a lot of skiable terrain for day two of the season. Enjoy it while it lasts peeps…