Canaan Valley Resort … Have You Been There Yet? Photos and Story by David McCue 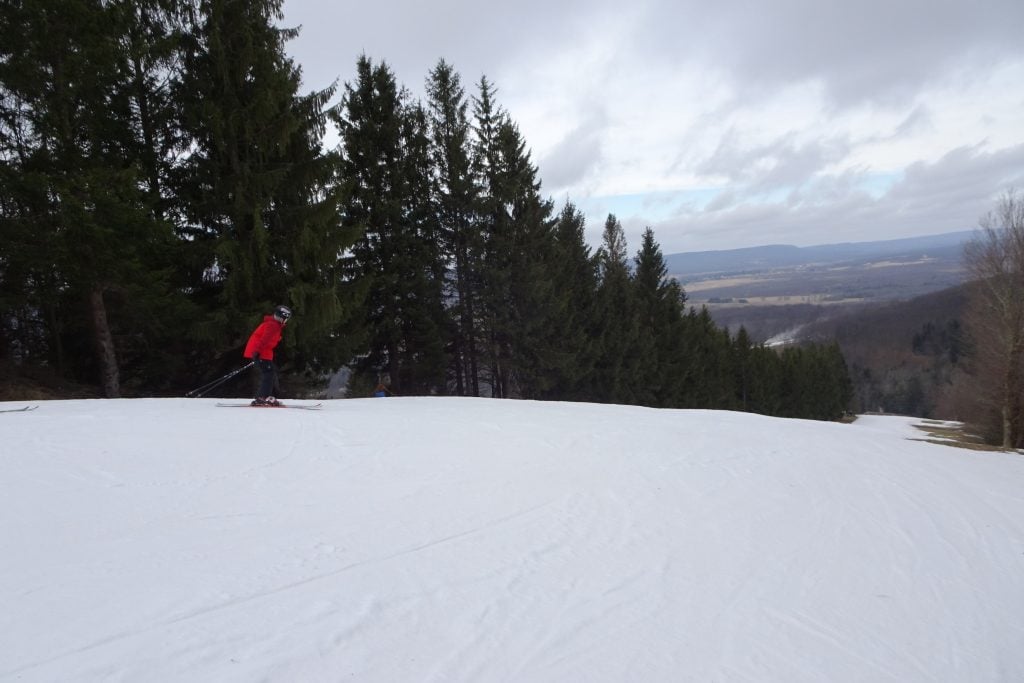 On Wednesday last, I looked at the calendar and came to the ugly realization that my holidays had been squandered. Time with friends and family, exchanging of gifts, an iron clad resolution not to resolve; that was all accomplished and enjoyed, but what about skiing? A failure I am afraid, a sad empty slot in the festivities. On December the 16th I did ski 18 inches of powder in the North Carolina mountains but that was in 2018 and time has marched forward to 2019. On Wednesday, January 2, I realized that I had not skied at all since LAST YEAR! So, I did resolve to make a lightening trip up to the Canaan Valley in West Virginia, a longtime favorite of mine.

By the time of my decision, conditions throughout the Southeast had begun to deteriorate but Canaan Valley Resort was still making snow and on the high side of open trails. That by the way is not unusual, CVR is on the high side of West Virginia and the valley floor is by some accounts the highest in the east. It is a micro climate, unique in its terrain, its trees, and I would say its people. But I’m getting ahead of myself. To pull this trip off in two days was going to require some driving but I don’t mind that. My rule of thumb is that my drive time must equal my ski time, and in this case that meant twelve and twelve. For me it means spending a night in Davis, West Virginia, which is an added bonus. Beers and conversation at Stumptown Ales, some pizza at Sirianni’s or Hellbenders Burritos, watching a band and crashing at the Purple Fiddle guesthouse. Some or all the above is worth the trip alone for me. 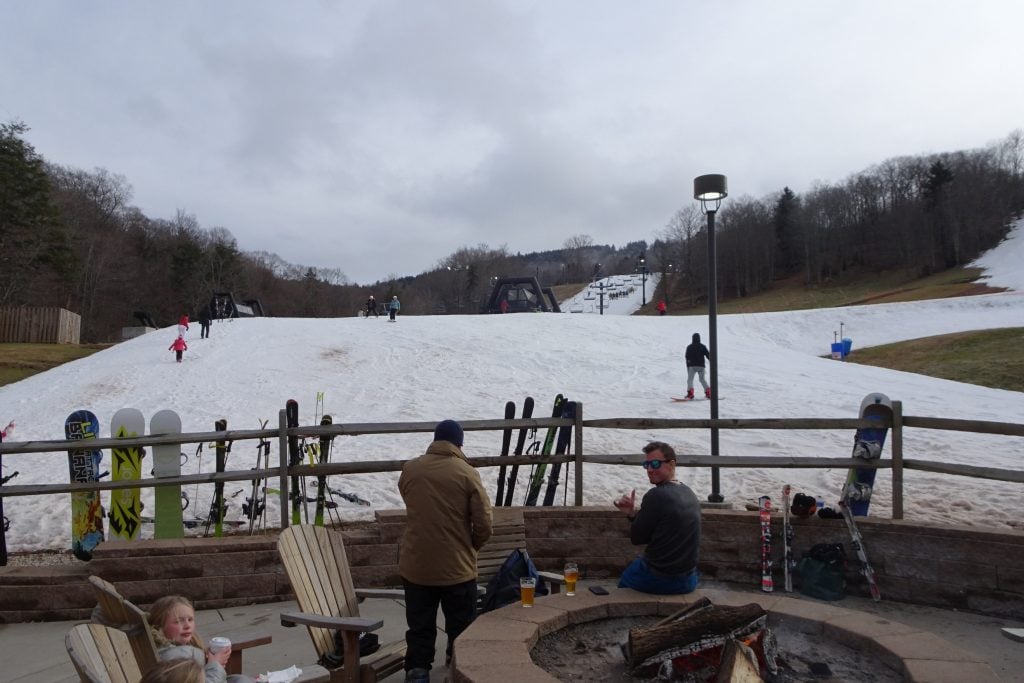 Good beer, a warm fire and no lift lines

On the mountain, I generally have daytime chili and microbrews looking out on the slopes from Quencher’s but I talked to their Chef de Cuisine and he is offering serious menu items if you want to sit and enjoy something special on the mountain. Canaan Valley Resort also has its own lodge which underwent a major expansion and renovation a few years ago. Restaurants, bar, hot tub, and pool; everything you need is there including a shuttle to the slopes, but I’d still recommend checking out Davis and Thomas for the complete experience. 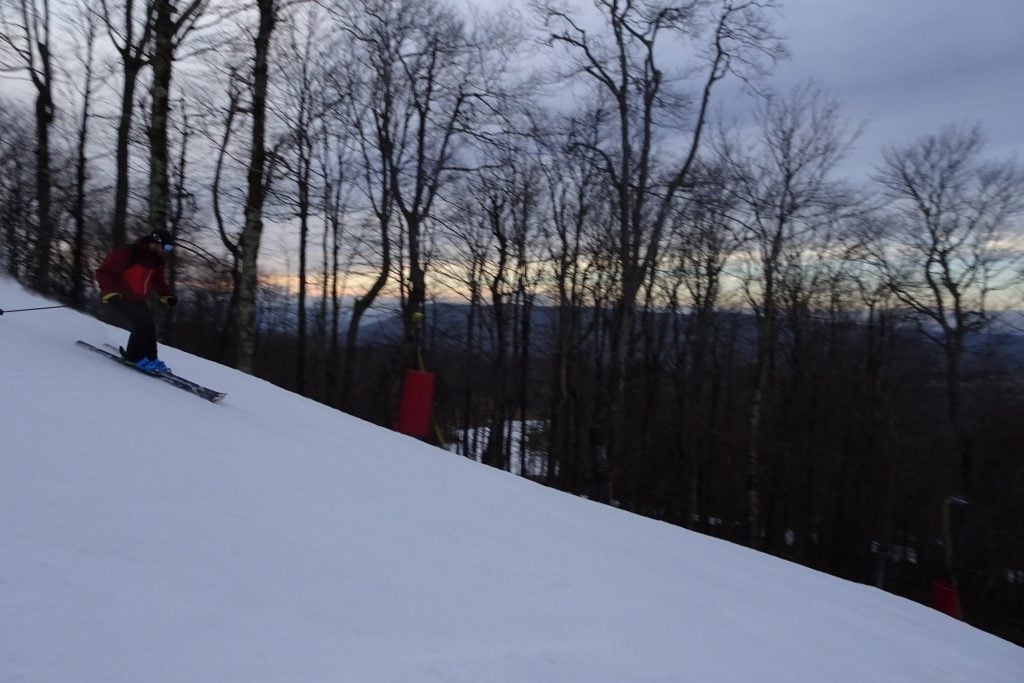 I am always devoted to the principle of getting the last chair and I spent the last part of the day with Justin Harris who does great reporting, photography and video for CVR. If you haven’t seen his stuff you should look at the Canaan Valley Resort Facebook page and see his first morning runs down the mountain, it’s a very effective and honest way of reporting conditions especially in conjunction with the live webcams here on SkiSoutheast. I am, incidentally, old. If you have never listened to an AM radio snow report about conditions at a resort four hours away that might or might not be current within the week (talking to you Red River, New Mexico) … you cannot fully appreciate the travel benefits of the internet.

Friday morning, I got to ski early with Justin and patrollers that I’ve said hello to for years. There is a lot of knowledge and experience of the valley (and of backcountry and rivers all over the country) in the patroller’s shack, and characteristic of the whole community they are a pleasure to spend time around. Another statement of the pride of the community is their continued attachment to the unique history of this place. I enjoyed researching and writing an article last year about the deep roots of skiing in the valley. I learned this visit about a great project to memorialize their history in a physical museum. The Snow Sports Museum of West Virginia is an indication of how much there is to tell and how committed the community is to sharing the story going forward. 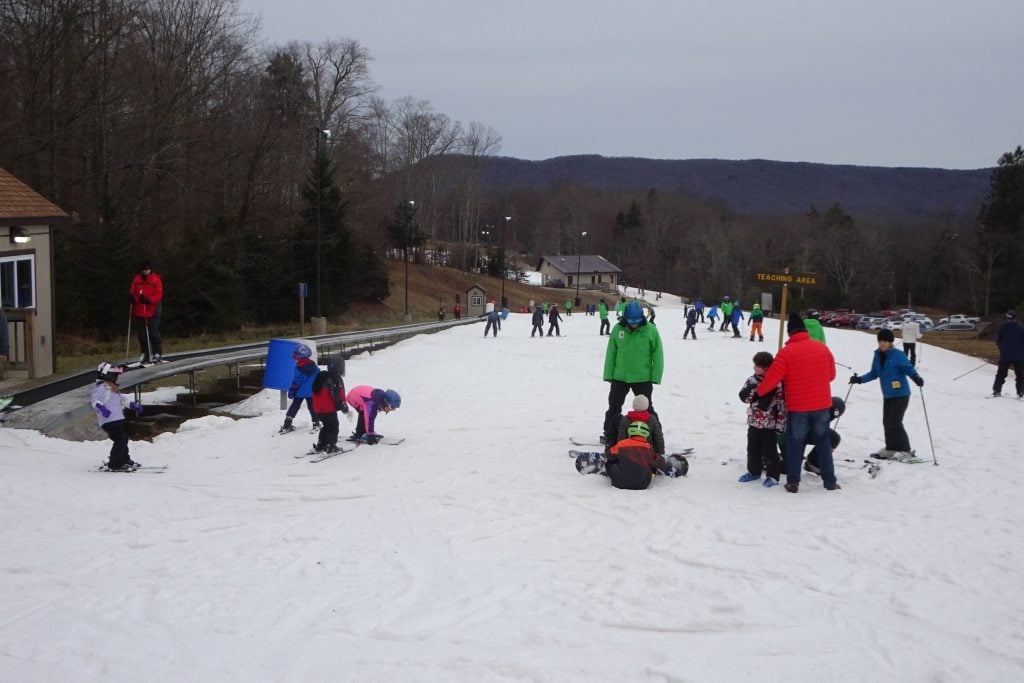 As I was leaving the mountain, I skied back down their learning slope and snapped this picture. Canaan Valley Resort has an exceptional learning area. A wide long hill with a conveyor that connects to a beginner’s chairlift that connects, if you want, to the main lift. It’s all at the base of the mountain, relatively sheltered and close to the base facilities with green jacketed instructors galore.

Being a storm chaser and tree hugger by nature, I usually head to the Valley for deep snow events. They have always been quietly known for good tree skiing but lately they have committed to that as part of their identity. And they are fortunate to have Whitegrass Touring Center as their neighbor which is the tree nirvana of our entire region. The Bald Knob trail winds from the top of the lift, a portal into the woods just beside the patrol shack, it’s appreciated to give patrol a heads up if you are going that way. You can make your way to the top of Bald Knob itself and there beneath you begins Whitegrass’s network of trails, woods and meadows. If you drop in there be sure and support them by stopping at the Red Lodge to pay their day use fee, and re-nourish with a bowl of soup or a plate of lasagna. 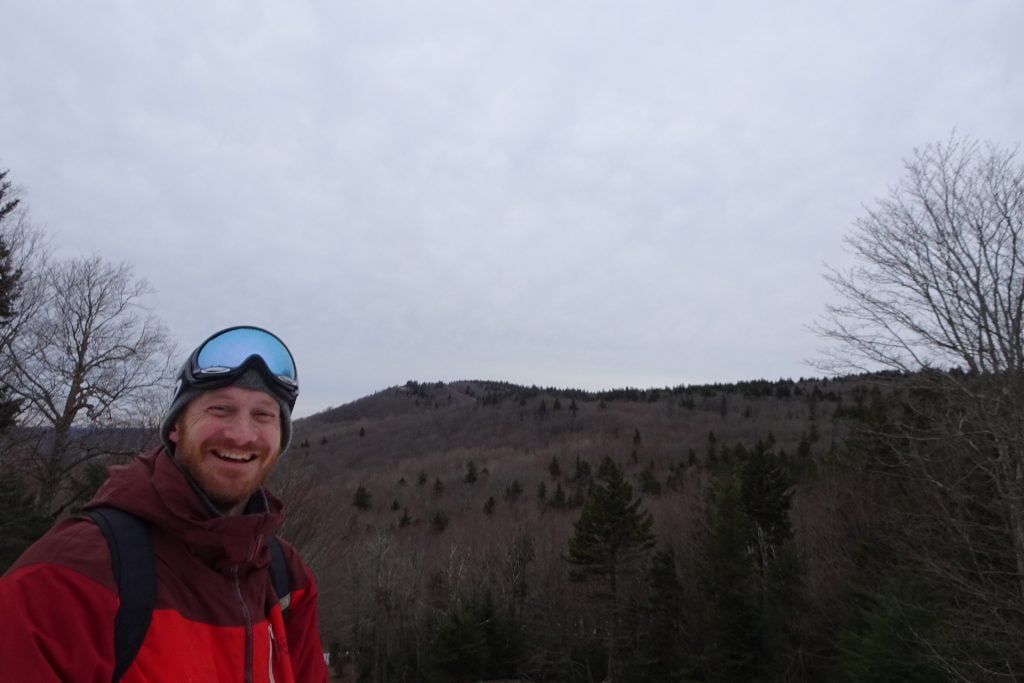 Justin with Bald Knob in the Background, next storm cycle I plan to meet him there

Canaan has greatly improved its snow making since I started skiing there. They are blessed with naturally lower temperature averages and they can take full advantage of every window to lay down more snow when much of the region is on hold. As we all know conditions in the Southeast are not currently at their prime but there were still many possible paths from top to bottom including a favorite Meadows 1. I enjoyed them all and more were being made ready. 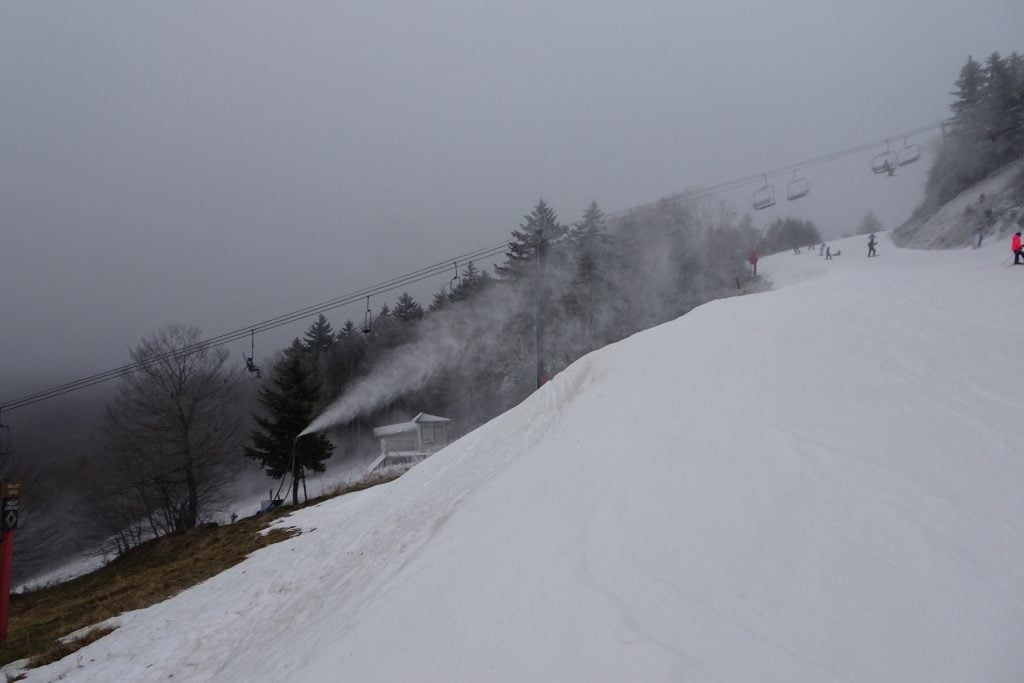 The area is exceptional for auxiliary activities so even if the snow is low there is still so much to see and do. I have a notion soon to collect a group of family and friends for a valley expedition. I’m lobbying for Canaan for all the reasons above: they are always the first to open trails with natural coverage and always amongst the last to be forced on hold by inclement weather. Even then, I know it will still be a special time. The region is so beautiful in all conditions with the great vibe of Davis, all season hiking at Blackwater Falls or something more serious in the Dolly Sods wilderness. 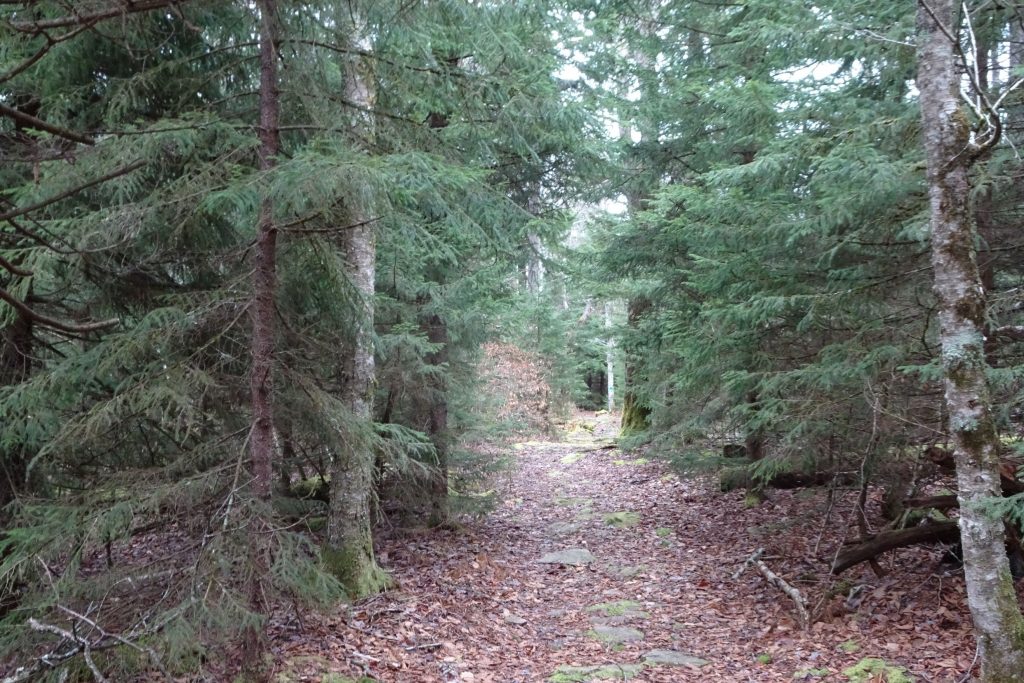 How about some skiing AND a ramble to restore the soul?

I wonder, as I look back over this, if you might think I exaggerate the virtues of the valley? Perhaps I’ve fallen victim to my own hyperbole? Dear reader I assure you I am not; the valley has provided me with some of my richest skiing experiences and the community embraces anyone who is open to that opportunity. Isn’t it time you finally went?

Previous Post
1″-2″ of SNOW has Fallen, SNOW and COLD Return to the Mountains! See Which Mountains Got it…
Next Post
Sunday, January 6th and Resorts Await More Cold Temperatures