The Calm Before the Storm? A Foot of Snow?! Hope So! 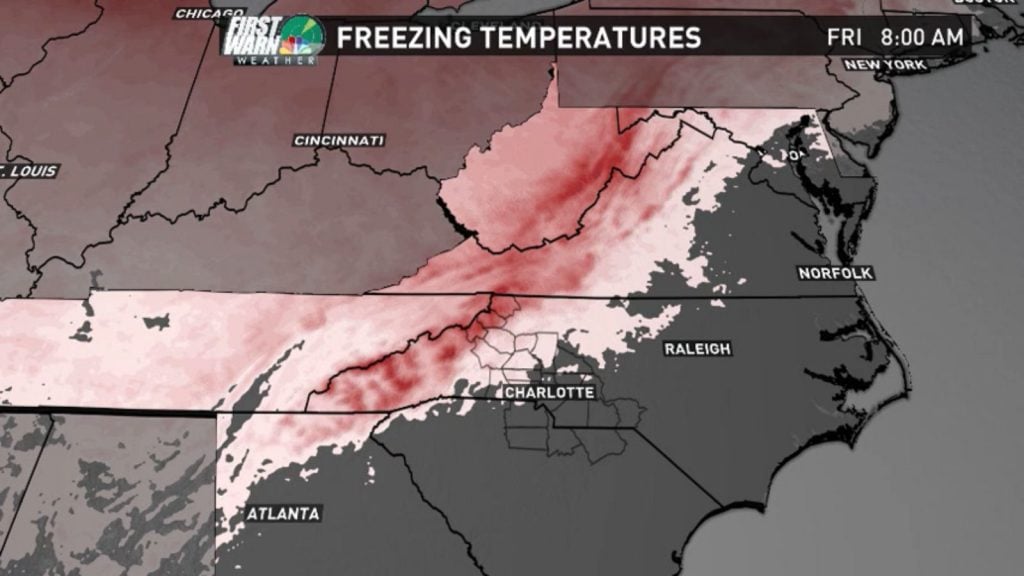 I actually began a bit of this morning’s blog/report last night – basically sharing some of my own experiences on the mountain here at Snowshoe yesterday. As I compiled the snow reports from around the region this morning – I almost felt like I needed to temper some of my exuberance over the conditions here in the West Virginia mountains. My brother resorts in Virginia, Tennessee and North Carolina are hurting just a little. There’s a lot of comments on the reports about thin coverage and a few less trails open as they fight the fight against mother nature. 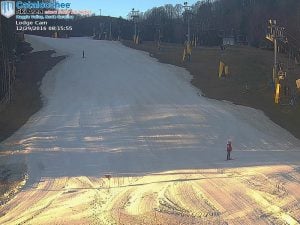 Cataloochee Ski Area and Appalachian look darn good with good side-to-side coverage and Beech and Sugar mountains are hanging in there although the sides are creeping in and they are reporting some thin areas.

The good news is that all ski areas are open with the lone exception of Sapphire Valley which is more of a resort that happens to have a couple of ski slopes – than the other way around.

Conditions into the West Virginia mountains are simply better because of the more favorable temperatures they’ve had thus far. I can’t speak for all of the WV ski areas, but here at Snowshoe there are no thin coverage areas and the surface conditions on Wednesday were very good. The slopes became a mass of humanity at around 11am as everyone woke up and hit the trails, but prior to that things were pretty sweet. Most of the trails were kind of a loose to firm granular. Later in the day it became a bit more “corn” but all-in-all really good conditions. Once things got busy we skipped across to Cupp Run and I receive mixed reviews. Those of us with new skis and sharp edges shared a real enjoyment of the conditions on Cupp. Those of us with rather dull edges found portions of Cupp treacherous. I was somewhere in the middle. Most of the 1.5 mile run was in great shape – but there were large-football-field-size areas of scraped off ice that proved difficult for many to maneuver.

After hitting up Cupp twice we ventured back over to the more heavily trafficked main part of the mountain. To be fair, the largest lift lines only took perhaps 10-15 minutes to clear even though the slopes themselves were dotted with a LOT of people.

Is a BIG SNOW EVENT COMING?

The talk of the day here at Snowshoe was/is the forecast for up to or more than a foot of snow. I did the singles line most of the day and nearly every group I rode up with mentioned it. Meteorologist Brad Panovich provided two skier’s forecast videos and Kenny posted those.

I could almost see Joe Stevens’ eyes roll as some of the ranges of potential snow are claiming anywhere from 1-5″ at Beech and Sugar and perhaps 4-11″ of snow in the West Virginia mountains. See that forecast below.

I always check several sources when looking at these kind of northwest flow snow events – even though our own Brad Panovich does an amazing job of forecasting these things well before most other local weather gurus come around.

According to NOAA, they are seeing: (For Snowshoe Mountain)

They are forecasting that snow is likely Friday night and then a wintry mix to snow even into New Year’s Day. So 7″-12″ or more is a likely range!

A Look into the NC Mountains:

So this should bring SOME SNOW into the entire mountain region and most importantly the entire ski coverage area WILL SEE snow making temperatures that will allow the snowmaking and grooming teams to make things are pretty and pristine again.

So if you are visiting any one of the ski areas of the Southeast and mid-Atlantic, things should be pretty awesome as we head into the busiest weekend of every ski and snowboarding season. Friday, Saturday and Sunday should offer really good conditions.

Tune In for SkiSoutheastTV on Friday morning at 8:30am.

Kenny Griffin and I will be broadcasting LIVE from Snowshoe Mountain tomorrow morning to bring you some LIVE looks at the snow and what’s happening around the region. We hope that you will join us! Kenny will post the link on the front page.

That’s it for me today. I’m currently looking out my condo windows as what was a light rain is transitioning into snow. So that means I will be out and on the slopes in just a bit!