To quote "SkiPink" from the messageboard last evening, "Remember, there is never bad weather, just inappropriate clothing." That is the kind of day it was if you were on the slopes or simply walking around any of the ski resorts in the region. I witnessed the high of 14° at the foot of Beech Mountain on Saturday afternoon where I was fighting those temps combined with 30 mph winds while taking care of my horses. The temps were even colder on top of Beech Mountain where at 1pm or so we had someone email us with a 3° report and winds that were pushing people backwards.

That kept the crowds off the slopes in the typical fashion that we’re used to seeing on peak weekends – but they were at least in the cafeterias, eateries and about anywhere else that they could warm their toes and fingers…and other vital body parts.  Those who braved the high winds and low temperatures said that conditions were a mix from GREAT to hard packed to icy in spots which would be totally understandable with the winds and skier traffic.

From most reports snow fell nearly all day at most areas and it was a very fine, powder snow just as Meteorologist Brad Panovich forecasted. It was so powdery that each time I would move my truck after perhaps an inch had fallen, the snow would blow right off my hood. There was probably no way that anyone could get a perfect, accurate reading on Saturday’s natural snowfall because it fell most all day but in some areas (due to the high winds) you’d see only an inch of snow on the ground. However there were some AWESOME snow drifts where the snow was nearly two feet deep and that is not an exaggeration. Since I mentioned Beech Mountain I can tell you that Ray Russell is reporting the official snow total for up there to be 3.5". That is the sixth straight day of measureable snowfall as 5.5" of snow has fallen since the 28th of December according to his mountaintop weather station. The official Cocorahs station atop Beech is reporting 2.3" of snow within the last 24 hours and 6.1" since January 1st. We’ll go with Gil Adams’ Cocorahs report and we’ll provide you guys with the snow totals elsewhere as we continue looking around the region this morning.

The OTHER big news is that the "pipe piercing cold" as Ray Russell calls it, will continue today as highs will again be in the single digit and teens with overnight lows in the zero to 6° range! Add in 15-25 mph winds that are forecasted (and gusts to 40 mph) and it will be another raw, wind-chill kind of day. If you are going to be on the slopes, please take care and cover all exposed skin or you will be hurting later.

The weather forecast is calling for continued cold, arctic temps and snow showers or flurries mentioned every day from now through NEXT Saturday! Banner Elk and Beech already look like we’re in Antarctica with frozen ponds, portions of streams freezing up and snow drifts that are displaying some artistic designs. That will be the scene pretty much wherever you travel today through the week ahead. 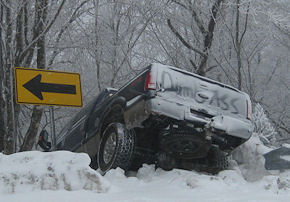 <A truck was "parked" off of Beech Mountain Parkway on Saturday!

Speaking of travel, the roads are slick around all of the ski areas, but they are EASILY driveable with a reduction in speed and the use of your brain. You don’t NEED 4WD to make it around the main roadways and highways as the DOT crews around our ski areas are among the best in the business. You WILL need 4wd or chains to get around some secondary roads like where your vacation rental might be located. Just use caution and don’t be horsing around too much or you might end up like this dumby. SkiPink posted this photo of one careless driver who ended up off of Beech Mountain Parkway on Saturday. (Someone obviously felt the need to give this particular driver a "title". He obviously ruffled someone’s feathers!)

Let’s get to the tour and show you guys where the snow fell and how much! We’ll take the tour today as the crow might fly north to south…

Appalachian Ski Mountain – 2° this AM and no reported measureable snowfall although they saw flurries most all day. App chose not to make snow either since it was so cold and since they have a base of 69-89" already built up across the mountain. They are 100% open with all 11 trails, terrain parks and ice skating.

Beech Mountain Resort – MINUS 4° early this morning and they are reporting NO new snowfall, but we can assure you that Beech received 2.3" of new snow, 5.8" in the last 48 hours and 6.1" in the last 72 hours. Beech has now seen 31.6" of snow on the season. It looks like they’ve closed down Lower White Lightning. We’ll try to get you word on that and why asap. Oz is open as is most of the mountain with what Beech is reporting as Hard Pack and Frozen Granular conditions.

Wolf Ridge Resort – 2° and 2" of new snow in the last 24 hours and 4" in the last 72 hours! Rick Bussey posted, "It’s Sunday morning, the last day of the Christmas/New Years Holiday Break and it has been an incredible two weeks at the Wolf. Record crowds, lots of snow and ski/boarder slope conditions that have been second to none. Its 2 degrees this morning and with clear skies we will have 11 runs open today, 4 lifts in full operation and slopes that are groomed to perfection. Come join us today and enjoy one more great ride at the Wolf before school starts Monday. See you on the slopes!!!"

Cataloochee Ski Area – 4° and TRACE of new snow in the last 24 hours. They made snow overnight but will not be during sessions today. They are 100% open with all 16 trails and snow tubing for day sessions only on Sunday.

Sapphire Valley Ski Area – 12° and no snow. They will be open with both slopes and snow tubing for today>

That’s it for the North Carolina report. If you want to see all of the Southeast’s ski resorts and where more snow fell in the last 24 hours, visit www.SkiSoutheast.com  and remember that you can visit the region’s most visited and most linked to snow report at https://www.skisoutheast.com/skireports.php

Send us your photos, ski videos, trip reports and any comments or questions to: [email protected]

Previous Post
Notice the ‘Parking’ at the Bottom of the Photo and on the slopes at Winterplace Resort from this Week – Photo by FishorSki
Next Post
Up to 6 inches of MORE SNOW, Brutally Cold Temps and Great Conditions!