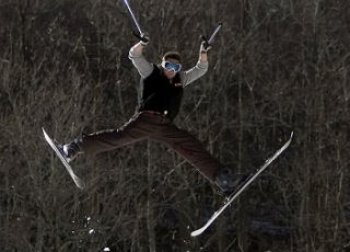 Located in the beautiful Blue Ridge Mountains of North Carolina, Boone is conveniently close to many of the area’s best Boone Skiing NC destinations. Sugar Mountain Resort, Ski Beech, Appalachian Ski Mountain, and Hawksnest Resort are all within about a half an hour’s drive from the quaint, yet modern, mountain town.

Just twenty-five minutes from Boone, Sugar Mountain is the largest of the Boone Ski Area’s Boone Ski Resorts. At an elevation of 5,300 feet, the resort boasts twenty slopes, four double chair lifts, a triple chair lift, a handle toe, and a carpet lift for beginners. There is also a snow tubing park onsite, with its own magic carpet lift. The longest run in the 115 acres of skiable land is a lengthy 1.5 miles. Sugar boasts the largest area and the highest vertical drop of all of the Boone Ski Area’s resorts, and has been an enduring favorite among families for years! Make sure to ski Sugar each night from 6 to 10 p.m. when 100 of the park’s acres are lighted for night skiing, and don’t forget about the ice skating and snowshoeing!

Though it might not be the largest in the area, Ski Beech, on Beech Mountain, holds the distinction of being the highest ski resort east of the Mississippi. At 5,506 feet above sea level, Beech boasts a vertical drop of 850 feet, fifteen slopes, a terrain park, a half-pipe for boarders, and a snow tubing park that is perfect for the whole family! The new high-speed quad, a fixed-grip quad, five doubles, and two surface lifts ensure that skiers won’t tire out on their way back up the slopes. Ski Beech is just a 35-minute drive from Boone NC and offers some of the best Boone North Carolina Skiing the area has to offer.

Even closer to Boone NC is Appalachian Ski Mountain, the first resort of its kind in the area. Since it opened in 1962, the resort has been a favorite among families who enjoy the ten slopes, the longest of which is a half mile in length. Though the vertical drop is only 365 feet, the two terrain parks, which boast thirteen rails and eight boxes, are popular among snowboarders. The renowned French-Swiss Ski College—that is responsible for teaching over one million skiers and boarders the tricks of the trade, and has worked with both the military and the Special Olympics—has a reputation for excellence.

The Boone Ski Area is known for more than just Boone North Carolina Skiing. Snowboarding is popular here, too, as is snowshoeing, and of course, snow tubing. Hawksnest is one of the area’s most popular snow tubing parks. Its twenty lanes range in length from 400 to 1,000 feet, and are lighted at night for night tubing.