This was just sent to us by Appalachian’s Marketing Team. Since the season is now over, we’d thought we’d simply share it as is… (Be sure to check back for more news soon…) 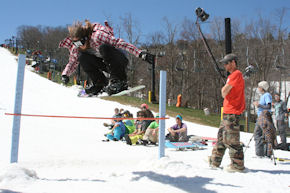 Like Babe Ruth’s famous “called shot” in which the Babe pointed to the direction that he proposed to hit a homerun, Appalachian Ski Mtn. has once again skied through its preseason-announced closing date.

On January 31, 2009, Appalachian Ski Mtn. announced over a year in advance that it would ski until April 11, 10 days later than any season ever, to accommodate Easter vacationers wishing to visit the Blowing Rock resort.

Appalachian’s commitment to annual snowmaking improvement and snow management through grooming allows it to annually set and meet its late closing schedule, assuring skiers and snowboarders a dependable season for their vacation planning needs.

Appalachian ended the 2009-10 season with seven of eleven slopes open despite record warm temperatures in the 60’s, 70’s, and 80’s in March and April.

Appalachian has now skied through its preseason-scheduled closing date for ten consecutive years, an unprecedented accomplishment for any Southeastern ski resort. Appalachian has published its projected opening and closing schedule since 1992.

Previous Post
Thanks for a GREAT SEASON!!!
Next Post
Next season is a while away but start thinking about your trips now! – Photo provided by SkiSoutheast/SkiNC MB Member Marzski