Appalachian Adds Yet Another Ski Slope!

Drew Stanley from over at Appalachian Ski Mountain emailed and called me back in mid July to share this news of interest to ski and snowboarding lovers in the region. (We’re still in "summer mode" around here Drew, so sorry about just now sharing this news!) 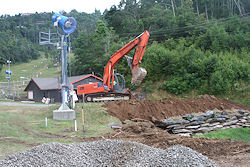 Appalachian Ski Mountain has long been known as the place that millions of skiers name as the first place they learned to ski at. In addition to ramping up things with their aggressive terrain parks over the last several years that appeal to the more adventurous skiers and snowboarders in the area – App has always maintained a strong focus on their beginner ski terrain. That said, Appalachian Ski Mountain is in the midst of construction of a new, beginner slope and teaching area and they are promoting that with the announcement of a "NAMING THE SLOPE" contest.

Drew Stanley writes, "The new slope will be located near the base lodge between the maintenance shop and the sprinkler pond reservoir, and will feature a new Sunkid conveyor lift. The new conveyor lift will allow skiers and riders to unload to either the left or right, and will provide two separate slope areas. The new slope will provide a better way to separate beginners and especially small children from other higher traffic skiing areas."

App shared the fact that the new slope will bring their slope offerings to twelve and it will also feature automated snowmaking and lights for night skiing.

General Manager, Brad Moretz added, "Since Appalachian is well known for the teaching excellence of the French Swiss Ski College, we are pleased to substantially increase our beginner terrain and improve the experience for many of our guests.”

Appalachian’s friends, fans, and patrons are being offered a chance to win an individual Season Membership for the 2010-11 season for the best / most original slope name entry for this new slope. Although all of Appalachian’s slopes have an apple/appal theme, all original ideas will be considered. Ideally the name would pertain to the slope being for beginners and relate to the fun and excitement of skiing and snowboarding. The orginal deadline for submitting names was July 31st, but we’ve not heard whether a name has been decided on. If you have an orginal idea, fire it to them by clicking HERE.

Hats off to the management at App for never standing pat over there!

If you have some news or photos to share, email us at: [email protected]