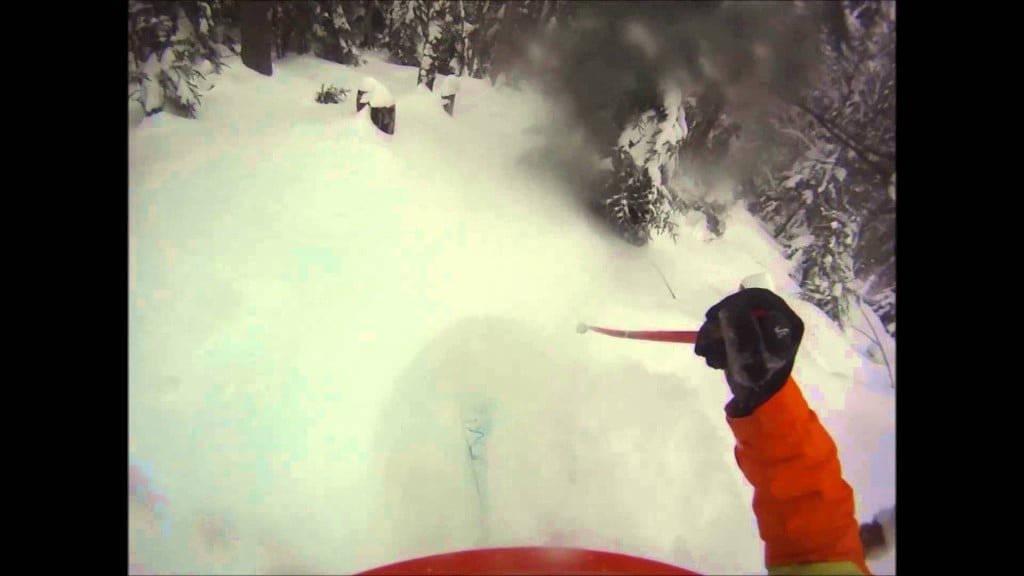 What a morning for us North Carolina folks!  There is several inches of snow all over a good portion of the state this AM.  Last night was fun.  It didn’t dump as much snow as expected but it’s still awesome to see.  Check out the view from my porch down here on Lake Norman in Davidson. I got about 4 inches or so.

This is a skiing and snowboarding website though so let’s get to talking about what happened in the mountains.  It snowed.  A good bit.  North Carolina and Ober Gatlinburg in Tennessee got the brunt of the storm.  That’s the second time this week.  It also snowed just about everywhere else.  I think the only resort that didn’t see any snow in the last 24 hours was Wisp Resort.  Everyone else saw at least an inch.  Here are the totals.

Sugar Mountain is the winner today.  I was a little hesitant on going with that seven inch number, but after talking to Mike he said it was legit.  He told me his house, which is in the Foscoe area, has 6 or 7 inches on the ground.  When No Snow Foscoe gets that much snow you know it was a good storm.

The North Carolina resorts and Ober are the place to be today.  At times last night it was absolutely dumping across the High Country.  I was sitting in bed last night going through the webcams and the base cam at App Ski Mountain showed some big old fat flakes falling.  It almost looked like it was raining the snow was coming down so hard.  Luckily, I recorded a minute or two of the action.  Check it out below.

If I wasn’t going to Snowshoe today, I’d be bummed that I can’t go riding this morning.  I’m scanning through some of the webcams and I just saw some pretty decent sized sprays on the Beech Mountain base cam from a couple of snowboarders.  Word is that Beech didn’t groom anything so there should be a nice layer of thick powder on all of the trails.  It’s not that champagne powder, but rather a wet and heavy snow.  I don’t think anyone is complaining though.  There’s lots of soft turns to be had today.

This type of snow is also great for base building, not that any of the resorts are hurting right now.  I think we’re at a point now that many of the ski areas can remain open into late March if they want to thanks to recent storms.  There’s so much snow on the cut trails right now.  It’s funny in that it seems like the best snows of the season have come after most of the snowmaking is over with.  That’s some great timing.
Summit Summit Summit
Welp, the 2015 Ski Southeast Summit at Snowshoe Mountain is a single day away now!  I’ve been waiting months for this and it’s finally here!  So pumped!  Conditions are going to be insanely good as well.  Feet and feet of snow over the last 5 or 6 weeks has filled in the entire mountain.  Unofficial Networks, which is a pretty prominent skiing and snowboarding website out west, featured a video from Snowshoe on their site yesterday.  The post was entitled “West Virginia has better skiing than Tahoe right now…..”.  If you don’t believe that’s the case, you will after watching the video below.

Woo!  That video got me so amped yesterday.  It’s been several years since Snowshoe has had that much snow on the mountain.

We’ve got a rough itinerary for the weekend planned out.  Here’s what we’re thinking.

FRIDAY NIGHT IN THE CONNECTION – RUSTED ROOT
There will be a VIP SECTION for SkiSoutheast.com peeps…but there IS limited space so it is first come, first “allowed”. The VIP section will hold around 15 people or so and spill over onto the dance floor. The VIP section is off to the left when you go in.

You can pick up your tickets for the event at The Depot in the village.  They close at 8pm on Friday, so make sure to get in there beforehand.  Just tell them you are with Ski Southeast.

SATURDAY AT 5PM WELCOME TO SNOWSHOE AT THE NEW CORDUROY INN
It will be at 5pm in the Hearts Room Lobby.

SUNDAY 8:30AM FIRST TRACKS for SkiSoutheast people.
We will be at the top of Soaring Eagle Lift at 8:30AM Sunday morning for some turns on the mountain before anyone else.  This is always one of the best parts of the event.

These are only a few official meetups, but I’m sure a bunch of us will be finding each other on the mountain and having some beers and making turns.  I know Friday night at Silver Creek is usually where we all get together at first, so head on over there for the night session and find us!  I’ll actually be riding all day tomorrow as well, so look for me and come say hi!  Red and gray jacket and black pants.  And I’m really short.

One final note about Snowshoe, their Ridiculous Pass sale ends today.  If you’re coming to the Summit, I’d highly suggest buying one as it’ll be well over halfway payed off after this weekend alone!  The price goes up from $229 to $329 tomorrow, so make sure to get it today while you can!

Everyone enjoy the snow today.  I know I’m going to enjoy looking out my window beside my desk and seeing a blanket of white.  Four o’clock can’t come soon enough though, as I’m ready to head to wild and wonderful West Virginia.