Another Mild Sunday, Cold and Snowy Week Ahead!

We haven’t heard from Meteorologist Brad Panovich since Groundhog Day (actually the night before) so we can only assume that he’s hating on these mild last few days. We have a VERY COLD forecast for the week ahead and maybe even some significant snow coming in around Wednesday night into Thursday, however if some of the long range forecasters are correct we may see the last of the real cold and snow for the rest of the season?!?!

Accuweather Meteorologist Joe Bastardi is saying that after this week’s blast "the back of winter will be broken". He doesn’t rule out "winter trying to make a return" to the Southeast and Mid Atlantic but those would be sporadic and not the rule according to his long range forecast for the rest of winter. I connected with Joe’s team on Saturday and got permission to use his video clip (with the obligatory link 😉 and as you’ll see he talks about going up against Punxsutawney Phil as forecasting an early Spring prior to the furry rodent on national television. Bastardi can be a funny guy.

ICE AGE PREPARATIONS OR A JINXS!?!?! 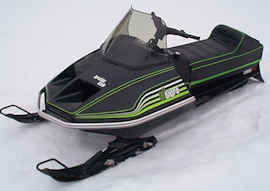 < I purchased two of these on Saturday! They’re used/old but they run like scalded dogs!

I don’t know if I am preparing for the ice age to come or jinxing a great finish to the snow season but on Saturday a guy made me an offer I couldn’t refuse and I picked up two Arctic Cat Snowmobiles. I’ve been snowmobiling a bunch at various mountains but it is pretty obvious that those boys have some kind of governor on them. While those at some of the resorts I’ve ridden at running pretty fast, these that I picked up on Saturday run like scalded dogs. We took them out to the place where snow goes to die and while much of the snow had melted on the major part of the fields, there were some bowls where there was six inches of great powder left over from the recent snowstorms.

I had to try these machines out and MAN I cannot wait until we get some decent snow. Of course now I have to concern myself as to whether or not Joe Bastardi’s forecast for the rest of winter will come to fruition. If so, THAT will have me wondering whether or not I did some kind of reverse jinx on the weather. The jock in me still semi-believes that I can have some kind of superstitious effect on things.

Here’s hoping we get a lot more snow!

We received some wide-ranging reports of weather on Saturday. I witnessed 48° in Banner Elk around mid afternoon. The skies cleared as did the fog and the parking lot out on Hwy 184 in front of Sugar was about half full. When that parking lot is half full – there are a LOT a people on that mountain. So traffic was brisk to say the least.

Surface conditions were soft to say the least at the NC ski areas from all indications.

Resorts up in West Virginia and Maryland saw from 1-2" of SNOW on Saturday. That’s right – SNOW! Snowshoe Mountain reported 1" while Wisp called it 2". We have not heard from McHenry, Maryland’s CoCoRaHs reporters nor David Lesher up at Davis, WV to confirm reports, but it looks like a good 1-2" of snow fell across the region with as much as 4.5" of snow being reported officially elsewhere in the state.

Things got quite cold last night which enabled several ski areas to make snow. Only Appalachian, Cataloochee, and Sugar did in the state of North Carolina. We received two emails from Beech fans wondering why they didn’t make snow. Ditto Wolf.

Cataloochee Ski Area wanted us to remind you guys about their awesome Sunday activities. They posted, "Don’t forget to join us for Sunday afternoon’s Cataloochee Recreational Race Series energized by Red Bull. Individuals race against the clock for the best of two runs. Top challengers in both men’s and women’s age divisions win cool stuff. Cost for racing is $5.00 for two runs. You must be 7 years of age or older to participate. Registration begins at 12 noon with racing from 1:30pm until 3pm and race awards at 4pm so dust off those racing skills and test your luck. The Cat is where its at on Sunday afternoon’s Recreational Race Series. Call the ski area for more information."

Wintergreen Resort was the only ski area to make snow in the state of Virginia. The other resorts saw temps slightly to warm to do so. It was 20° this morning at Wintergreen.

Snowshoe looks like the only resort in the Southeast that made snow AND saw natural snow (1") in the last 24 hours. That takes them to 121" on the season. Snowshoe is 100% open with all 60 trails including Sawmill Glades. I could be wrong but I think this is the first time this season Snowshoe has had all 60 trails open.

Winterplace saw no snow however they made snow

Wisp is reporting 2" of new snow and awesome grooming – 100%

Looks like another mild Sunday but there’s plenty of snow to play on and cold and more snow is on the way for the week ahead. Here’s hoping that winter will continue to bring us abundant snows through the end of March…at least!