Another Mild Day Sunday before some Mixed, Underdeveloped Snow Comes in Monday through Wednesday

It looks like a CRAZY mild but great day to ride the snow no matter where you’re headed to play on Sunday. We’re seeing some mild highs forecasted for the NC Mountains as the NWS is forecasting a 55° temp for Banner Elk today. I can see some tennis matches and golf courses getting some business off the mountain. Forecasters were off a bit on Saturday so we think it will be considerably cooler than that today. Regardless, we’ll probably hear about some upper 40s hit today.

We have some mixed, yuck forecasted for Monday through Wednesday so enjoy playing today and stay tuned as cold comes back in on Wednesday night.

Whew! Saturday on the slopes was nothing short of awesome! As most of you know, I’m at Snowshoe Mountain this weekend. My daughter, Carrigan and I headed out bright and early and were there for the rope drop. The skies were a deep Carolina Blue and the air was an icy 15°. By 10am things had already clouded up as more light snow looked to be moving in.

I met up with "Joe Knows Snow", Joe Stevens at 8:45am or so and the three of us made some sweet turns top to bottom, cruising right onto the chair each of the first four runs by 9:40 or so.

Just after our second trip down, while getting off the chair at Ball Hooter, we saw Ed Galford, Snowshoe’s Vice President of Mountain Operations. Ed know’s every nook and cranny of Snowshoe Mountain and he skis like it. After a couple more runs down various trails on that part of the mountain, Ed left us and we stopped in at the Boat House at the bottom and enjoyed some great Belgian Waffles and conversation. 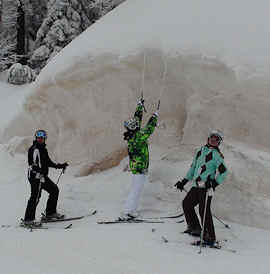 By that time it got pretty crowded at the bottom of Ball Hooter so we stayed mostly over on the green, glide trails over at Powder Monkey and Powder Ridge and honestly while the lift lines looked a bit long, they only took maybe 5-10 minutes to get to the chair. We did a few more runs over there and then Carrigan and I hit up the Western Territory – home to The Cupp Run and Shays Revenge. I’m still hurting from the knee surgery during the off-season so I was glad to see that Upper Cupp wasn’t filled with moguls. The entire top of Shays and Cupp were nice, firm and well maintained to offer some great fall-line type skiing where you get those weightless type transitions.

The bottom of Cupp was about half and half – moguls and smooth. I actually enjoyed hitting a few until it was obvious that my right leg was "running out of gas". It’s hard to keep any kind of side to side rythym going when you have a major "toothache" in your knee – trying to tell you to stop! It’s getting better though because while in Canada a few weeks ago I wouldn’t even try making those kinds of short transitions. 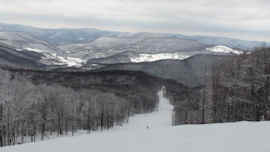 We still made another turn down Cupp before heading back over to the main mountain and I was surprised to see how the lines at the bottom of Ball Hooter had left. Lunchtime tends to do that if you hit it just right. By that time it was lightly snowing again and the temp was in a very comfortable upper 20s to 30° range.

We hit the singles line once on Powder Monkey and since it had NOBODY in it – things went pretty fast. There’s no question that the mountain is near capacity as far as lodging is concerned, but the slopes were relatively uncrowded, which made for a leg-burning several hours of making turns. Around 2pm we headed in for a short break before and some "refueling". Pizza did the trick and at around 2:30 we headed back out for more. For the afternoon runs we worked our way over to the Sawmill/Soaring Eagle side of things. The first runs were Camp 99 and then we did Widow Maker which for me was probably the best run of the day although Camp 99 came in a close second. Again the conditions were nearly perfect with some light powder on top for the entire top-to-bottom run on both trails. We decided to do Sawmill although we’d already heard that there were some icy areas on it. They were correct although the trail was great up top and from about the halfway point down. The steepest part of the trail was pretty shaved off by beginner to intermediate skiers who probably side skied down. Been there, done that in the past (and not so past) with my knee injury so no complaints there. We skied down to the right side of Ball Hooter which was yet another nice run and then called it a day. My right knee was singing by that point as it had taken all the fun it was going to take for one day.

I have no clue how many trips down the mountain we took today but I can say that even though the mountain was packed, the longest lift line I stood in all day MIGHT have taken 15 minutes and that was only once. The rest were all under 10 minutes with The Cupp side being pretty much a ski on the lift thing.

IT IS WHAT IT IS…

I have to say something here that sometimes doesn’t sit well, however as I got to the bottom of the mountain after our first run of the day I could not help myself as I asked my daughter, "Have you seen conditions like this anywhere else this season?"

It’s true…as top to bottom was an amazing corduroy with near perfect, carvable, packed powder along the edges of nearly all the trails. I’ve skied some "roy" at several ski areas this season, including in Canada, and I don’t know what Snowshoe does or uses, but every inch, including every corner, trail merge, e-v-e-r-y-t-h-i-n-g is just perfectly maintained when you hit the mountain early. I don’t know if Galford and his crews puts little "snow gremlins" on their groomers or what, but they do a snow maintenance thing that resorts nationwide should pay attention to.

Don’t get me wrong…all of our region’s ski areas do anywhere from a good-to-great job, but these guys get it right. You just never find chocks of snow or ice anywhere when they’re done doing their thing.

Late in the morning to lunch things were still firm, and we were met with some nice transitions from light powder to corduroy. The edges of all of the trails were made up of soft, deep snow and Carrigan, my youngest daughter Madison and I skied some tree lines and it could not have been much better.

It just bears mentioning that Snowshoe knows snow too and they do an awesome, awesome job of working with an amazing snowmaking power plant and the snow that God gives them to create some awfully sweet conditions.

Hats off for a much deserved "atta boy" um, man. Whatever, whoever, the snow was awesome…the best I’ve skied this year, minus powder days. We’ll have to do a survey of our reader’s to see who they feel does the best snow maintenance but my top two this season would be Snowshoe and Appalachian. Beech and Sugar would be tied for me and although I’ve skied at a few others I’ve only hit some once this season so I’d trust a reader survey a little over my own. We’ll have to do that this week for the fun of it.

As it turns out, the weather peeps were off a bit on the forecasted high for some of the NC ski areas on Saturday. The forecasted high was for near 50° at Banner Elk and in the upper 30s for Beech. Beech saw a high on Saturday of 41° so that had to make for a darn nice day on the mountain. From some of the emails I received it sounded like the messageboard crowd had a nice day. Some of the major players were AWOL and some left early, but from all reports our man Doug held his own in commandeering a good time for those who did make it.

We’ll try to do it all up again for the Snowshoe Summit coming in early March.

Looks like things are shaping up to be a mild day…perhaps the mildest we’ve seen this season as temps are already pretty mild Sunday AM. Here’s a glance at the 7:45am temps:

The coldest spot in the region this morning is Wisp at 22° and the mildest is Ober at 51°.

The NC Mountains may be looking at some potential for some generous showers and maybe even thunder in some spots Tuesday night and Wednesday before more cold air returns on the backside for the rest of the week. We may be looking at a little light snow later in the week. Banner Elk could see a high today in the 50s, and the rest of the week looks like highs in the 40s and lows in the 30s. No snowmaking for the resorts until Wednesday night when the temps dip to the teens again. Next weekend is already shaping up to be a great one with highs in the 20s and 30s and lows in the teens and 20s.

A little further north into Snowshoe, Canaan Valley and Wisp – things are looking a notch colder with highs in the mid 30s most every day until Thursday when things get colder into the mid 20s. Lows will be in the mid to upper 20s through Wednesday and then near 10° Wednesday night. Looks like the WV resorts will be fighting all sorts of mixed precip from freezing rain to semi frozen yuck this week though Monday, Tuesday and into Wednesday. We’ll keep you posted. The weekend ahead for the WV and Maryland ski areas looks great.

That’s it for now. I’m packing up and heading South to my beloved Western NC Mountains.

Email me at [email protected]  with your comments, questions, photos, videos or whatever else you can attach – except viruses!

Previous Post
A Cool Glow Was on the Mountain at Snowshoe Last Night. Click to enlarge
Next Post
Mild Week Ahead and then COLD Weekend Ahead! January 30th through Feb 2nd Forecast