Another HUGE Storm of to Hit the Mid Atlantic and Southeast Ski Resorts!

We’re on day 62 of the 2009-2010 ski and snowboarding season here in the Southeast and Mid Atlantic. If the second half of the season plays out like most forecasters think it will then we’ve got at least 75 more days of season to enjoy and remember that February and March are typically even snowier months than December and January!

I was looking at some of the season snowfall numbers this morning and many resorts are already approaching their average or normal FULL SEASON snowfall totals and we’re not even at the halfway mark of the season. For example, Appalachian Ski Mountain is showing 41" of snow for the season to date which is only 9" away from the average of 50" per full season!

Cataloochee is only 3" away from their 10 year, season average of 50". Beech Mountain Resort is at 53" on the season which is 72% of their average full season total of 80"…so they look well positioned to surpass their normal numbers.

Canaan Valley picked up another 1.3" of snow overnight and stand at 121.7" of snow on the season. They average 150" so they are 85% of the season long totals and we’re not yet one-half way there! Snowshoe’s 109" represents 61% of their normal, full season numbers…so they are ahead of pace to surpass those totals. Wisp Resort is now at 92.2" of snow on the season which is only 7.8" away from reaching their season average.

So it looks like the preseason forecasts of snowier and colder weather than normal are holding up!

BIG SNOW ON THE WAY…beginning this afternoon

This storm does seem to be tracking lower than some of the last few so there has been some tweaking in some minds of local and regional meteorologist today as to where and how much snow will fall.

If Brad’s forecast holds let’s look for the real snow to begin around 4pm this afternoon and it might begin as some wintry mix as it first hits Ober Gatlinburg in Tennessee and then moves into North Carolina, then Virginia, West Virginia and Maryland. The storm track looks to be suggesting that the heavier snowfall totals might be around the Western North Carolina mountains and then with some wrap around snows and subsequent Northwest flow snows…we might see 6-12" of snow for most all of our resorts within our coverage area with Snowshoe, Winterplace and the North Carolina resorts picking up the higher end numbers.

Brad’s thinking that Wisp Resort may have a bit less accummulation from this storm. As the storm moves out he’s forecasting some wraparound snow and much colder temperatures. 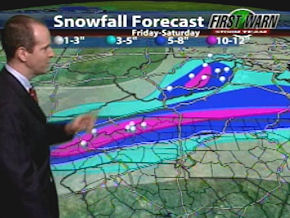 He’s still forecasting 6-12" of snow for much of the ski areas with a narrow band of 10-12" of snow. His thinking as of this morning is that this storm won’t be as epic as the mid December snowstorm that brought 28" of snow to portions of Tennessee, Virginia, West Virginia and North Carolina. However this one will bring some good depth for most of us.

With high temps in the teens and 20s on Saturday and with most of the snow falling during the overnight hours and into Saturday this should be the kind of light, dry snow that skiers dream about. A total accumulation of 10 – 14 inches is predicted by Sunday morning. Sunday is projected to be a beautiful ski day with a high in the low 20’s and mostly sunny into the Western NC Mountains and slightly colder into the WV ski areas.

Be safe on the roads, check our road conditions links and the LIVE webcams and get on up here! We’ve already heard from several ski areas that wanted us to spread the word that they and the local DOT crews will be plowing and salting entrance roads and access roads so that all roads will be easily accessible for most all vehicles with good tires. Depending on the timing of this storm some of the steeper access areas may require 4WD and/or chains.

It also looks like we have snowmaking temps through next Thursday as well so conditions could not be better for your weekend ski getaway! Pack up and head up people! You don’t want to miss this one.

While we’re seeing temps in the upper 20s in Western North Carolina, we’re already seeing evidence that the arctic air is making its way into the area.

Check out these early morning temps:

ZERO at Canaan Valley already at 8am this morning with another 1.3" of snow according to David Lesher’s weather and that’s now 121.7" on the season for Canaan Valley and Timberline.

-2° at Snowshoe and they are not really talking up the potential of snowfall but we’re thinking they’ll see it this evening and on Saturday as the backend and northwest flow snows take effect. By the way Snowshoe is back at 100% open for today and this weekend with tons of snow and excellent conditions.

3° at Wisp Resort. By the way Wisp picked up 3" of snow prior to 7am Thursday morning and that took them to 50" since January 1st and 92.2" of snow on the season. They are within 7.8" of their average snowfall for an entire season and we have 75 days or so left.

Wolf Resort is saying that they will be 100% open this weekend with ALL lifts and ALL trails.

The Homestead will night ski this Saturday and they have 7 of 9 open today. That is the first night session of the season – we believe.

Snowshoe Mountain is offering some great discounts! FREE SKIING for WV residents on Sunday. This weekend is their annual WV Ski Free Day! All residents of WV are eligible for a FREE lift ticket on Sunday. Just print the WV Ski Free Day voucher available in the events section of Snowshoe’s website, snowshoemtn.com, and take it, along with proof of residency to any on-mountain sales location on Sunday for your FREE all-day lift ticket.

Also, through the end of February, weekend lift and lodging packages start at just $125 per person, per night. So make plans now to join us on the mountain and enjoy some fresh snow, the region’s most open terrain and everything Snowshoe’s amazing mountaintop Village has to offer. Call 877-441-4386 to plan your Snowshoe escape today!

We’re on day 62 and there are 75 more days of opportunities to enjoy the snow for the 2009-2010 ski and snowboarding season!

Previous Post
Ten to Fourteen Inches of Snow is Forecasted for this Weekend! Plan Ahead!
Next Post
January 29, 2010 – Another HUGE Storm Heading Our Way!