Another 2018-2019 Winter Forecast PLUS Snowfall Amounts 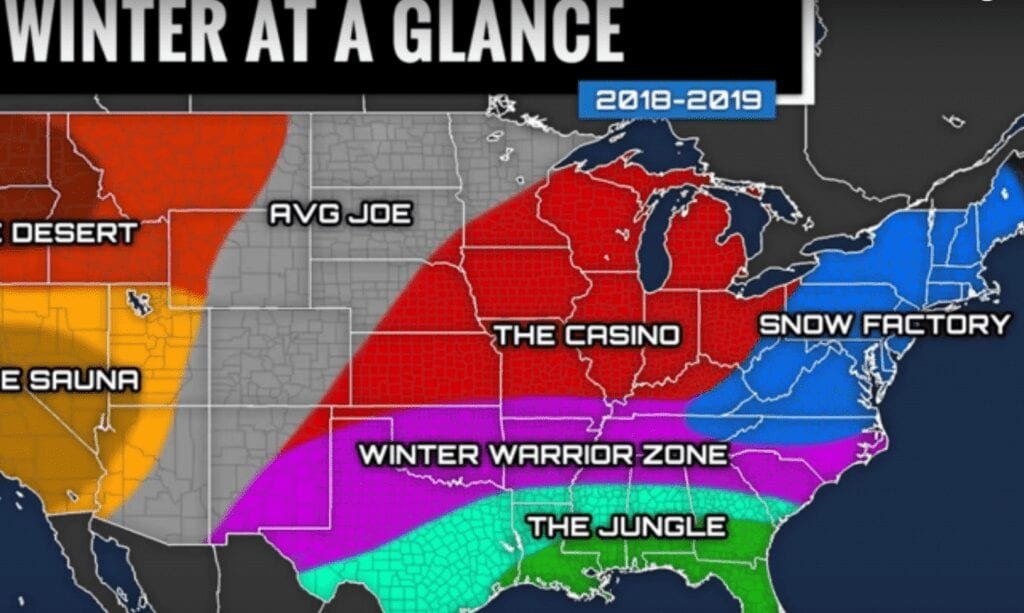 We shared our own Unofficial / Official SkiSoutheast.com Winter Forecast five days ago. If you missed that story, you can read it here.

I titled that one “unofficial / official” because we’re still waiting on the official forecast from our own Meteorologist Brad Panovich. We’ll share that one asap.

The quick summary of that forecast was that we think we’ll see temperatures that are 1°-2° colder than normal for the season and snowfall that is a bit more than average (10%-15% more depending on the area).

Several readers emailed asking how I have the normal, snowier WV areas getting only right ON or below their annual average. The answer is that they’ve only reached their promoted average 3-4 times in the last 14 years. Their ACTUAL annual averages have been significantly below the 180″ that Snowshoe, Canaan and Timberline promote as their long term average.

For example, Snowshoe has averaged 156.3″ of snow annually over the last 14 seasons. So while it may APPEAR that we’re predicting less snow than normal – that actually isn’t the case. I am predicting two feet more snow than they’ve averaged for the last decade or more. Make sense?

The snowfall prediction for each ski area was:

Note that the predicted snowfall totals for every ski area are for more snow than each has seen in recent years. However, some ski areas have “reported annual averages that are significantly above their actual average over the last 10-15 years.

Thanks to Margie Cross from Roanoke who shared, “Hey Mike. I always like reading the weather news on your website, particularly this time of year. I don’t know if you follow (Weather Decoded) but they also are predicting a cold, snowy winter for us. Check them out.”

I HAVE followed them for years and actually subscribe to their content (among many). Here’s their take (and I’ve embedded a link to their video at the end of this post. 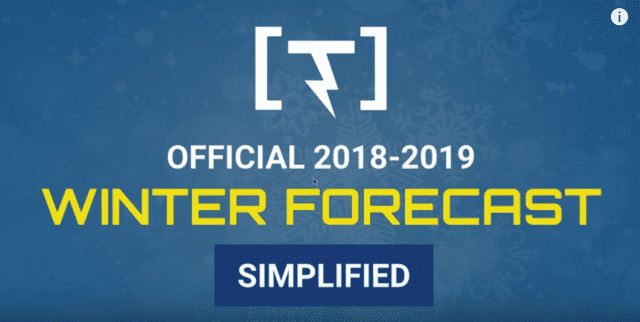 These guys do a nice job of keeping it simple for peeps like me.

The NOAA map below shows the typical pattern that is common in a winter with El Nino. Note the persistent, jet stream and storm track that sets up west to east, forecasting wet and cool temps for the Southeast. The Polar Jet stream is also potentially nice for pushing colder air into that moisture. Click to Enlarge.

Like most other experts, Weather Decoded is forecasting BELOW AVERAGE temperatures for the entire Southeast and mid-Atlantic region.

JUST HOW MUCH BELOW AVERAGE?

While most predictions seem to be around 1-2° colder than normal, Weather Decoded is calling for a west-to-east gradient where temps in our area could be as much as 3° colder than normal for December, January and February. For lovers of ski areas out west, things look reasonably average for the most part. 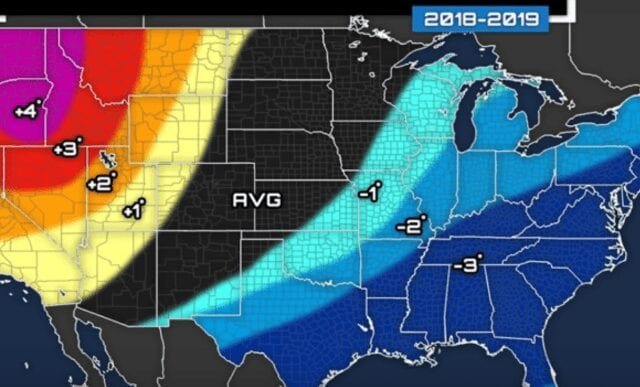 Now with all that nice, cold air in place, can we get a little moisture, please? 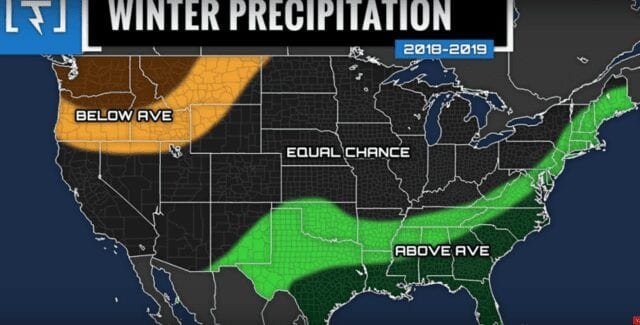 You’ll note in the swath of green on the map above, the prediction is for ABOVE AVERAGE to no less than an equal chance of normal winter precipitation. That above average precip path looks like a perfect prediction for Western North Carolina, Tennessee, Virginia, West Virginia and Maryland ski resorts. Could we ask for more?

As for HOW MUCH MORE precip… 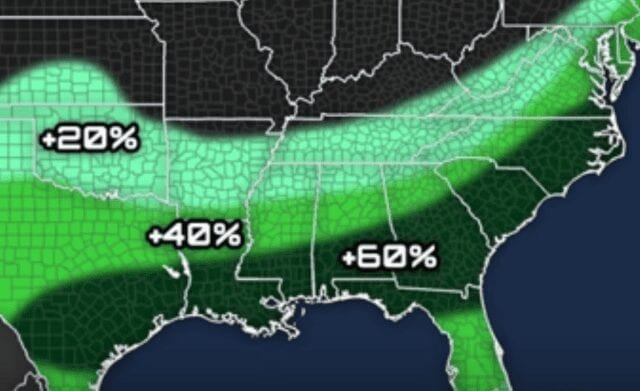 One thing I like about the Weather Decoded peeps is that they are willing to get really specific with their forecasts. Note that our ski mountains are all within that +20-40% range. 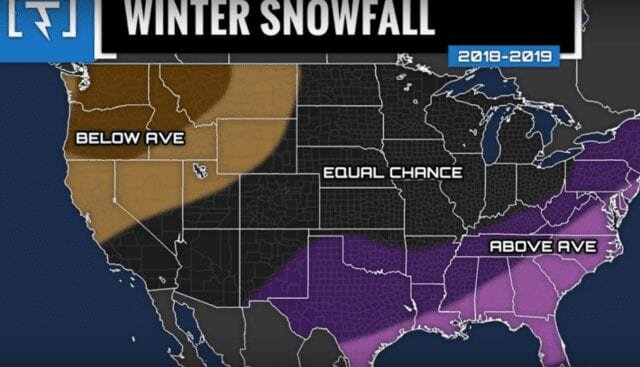 If you’ll note the deeper purple lies right across all of our ski mountains.

As for HOW MUCH above average, Weather Decoded provided that insight as well. 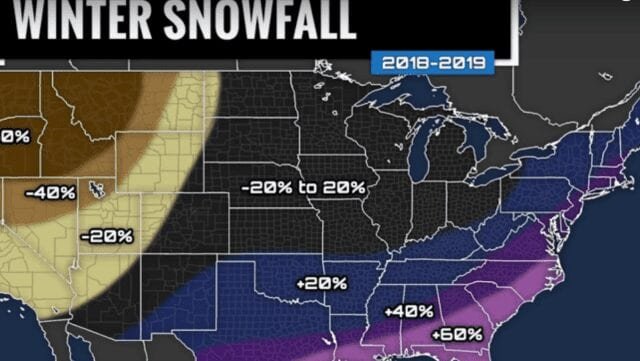 It was interesting to see their take on the swath of higher chances of more snow. Note that that the West Virginia, Maryland and Tennessee resort areas are within the +20% more than average, and Virginia and North Carolina are in the +40% area. Of course, we all know that Snowshoe, Canaan, Timberline and Winterplace get a real effect from the Great Lakes, so +20%-+40% is a real likely number.

When I was compiling our own winter forecast, I followed most of the same modeling and while I think that Weather Decoded’s numbers are slightly more attractive for our ski resorts, I also think they will trend slightly under-performing than what these guys are predicting. But hey, I hope they are correct!

Our prediction for Beech is 95″ on the season and that COULD be pretty conservative, because Weather Decoded is predicting 112″ and Beech HAS seen that much or more snow three times in the last eight seasons.

It would be AWESOME to see a real SNOW FACTORY for our area this season!

As Promised, Here’s the Video…

Thanks to Margie Cross again for having us take a look at this prediction. Loved it.