Ahhhhh Yeah, Winter Has Returned and The Weekend Looks Good! 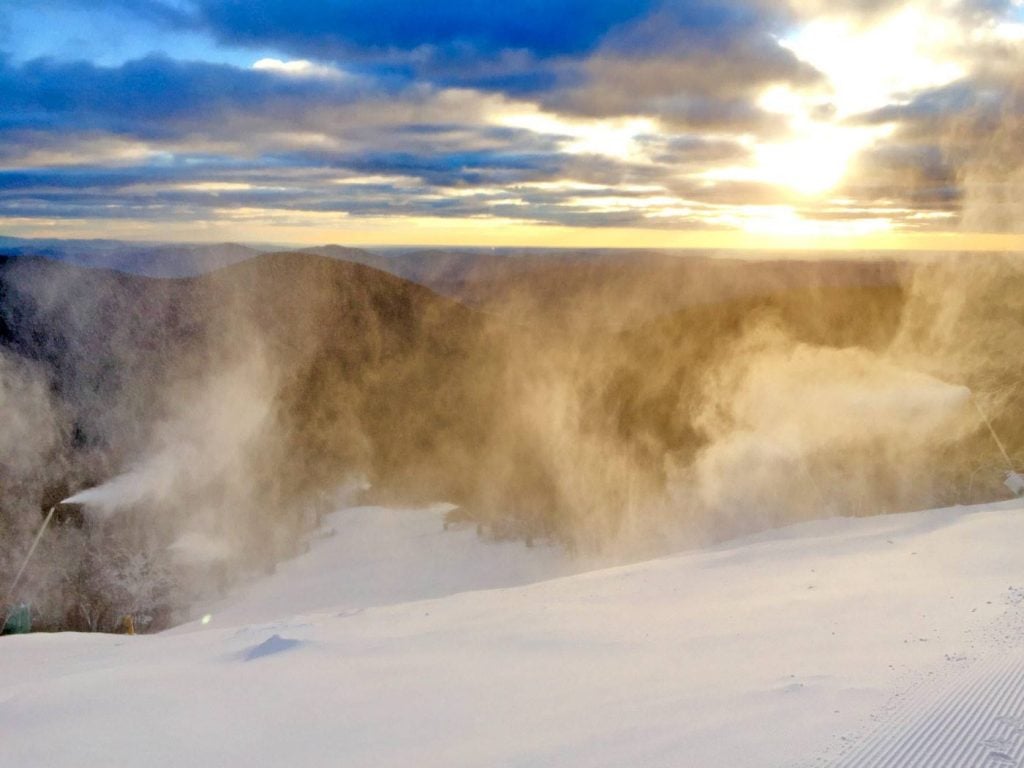 Finally, FINALLY, after a brutal few weeks we are seeing cold temperatures and snowmaking EVERYWHERE in the region this morning.  Temperatures dropped throughout the day yesterday and this morning the resorts are about 15-25 degrees colder than yesterday at this time as most everyone is in the teens and 20’s.  When doing the snow report, I didn’t even have to look and see if the resorts reported making snow.  I just knew they had.  Literally every single ski area in the region was able to make snow overnight and some were even able to start during the afternoon hours yesterday.  What a beautiful sight!  Here are some social media posts showing that snowmaking in all of it’s glory.

All of the resorts were pretty stoked to fire the snow guns back up.  So was I.  I found myself sitting in bed last night looking through all of the ski area webcams on my iPad and it was a welcome relief to see each one of them filled with manmade snow being thrown into the air.  As a snow lover, it was a sight for sore eyes to say the least.  We’ve been looking at this day for 10 days or so now once it appeared in the long range forecast and it’s finally here!

As expected, the ski areas in the northern part of the region also have a little natural snow to go along with that manmade snow.  Here’s what they are reporting.

Not a ton, but I don’t think anybody is complaining.  Especially since this is actually the second snowfall of the week for those guys AND they are looking at more throughout the weekend.  I’ll get to that in a minute.

With the return of colder weather, we are seeing (or will be seeing) the re-opening of some ski areas.  Cataloochee was able to resume snowmaking last night and they are open once again today after a week plus hiatus.  They only have a few slopes open and are only skiing from mid-station down, but it’s good to see the snow guns back on out there.  Tammy Brown sent this email…

WOW, we have been making snow little over 17 hours and have gone from almost bare ground to open on 4 slopes from midstation down.  We’ll be open with 2 aerial lifts and 1 conveyor lift  on a base of 8-12″ and a machine groomed surface.  Please note, we will continue snowmaking throughout the day as long as temperatures allow.  Our current snowmaking plan is to go up the mountain to Rock Island Run and open there as quickly as possible. 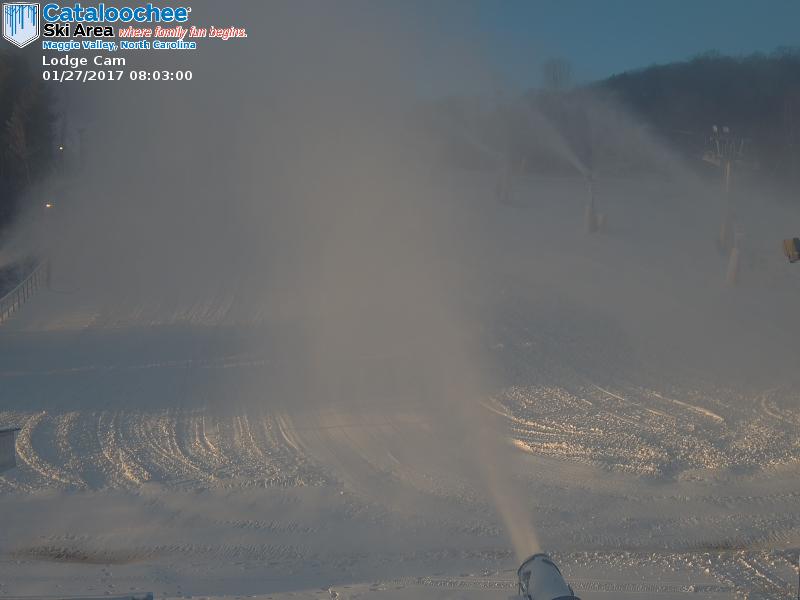 Snowmaking at Cat this morning!

Wolf Ridge is also back open today from 9am-10pm.  I am unsure of how many slopes they have open as their snow report doesn’t have a number, but it’s probably a handful or so with more opening in the coming days.

The other two closed resorts are Sapphire Valley and Ober Gatlinburg.  They remain closed today but Sapphire Valley has already announced that they will open tomorrow morning at 9am.  There is no word from Ober yet but they made snow overnight and continue to do so this morning.  My guess is they will open tomorrow morning based on what the webcam looks like and they should be good to go by then.

Extended Cold With Some Snow Mixed In

Brad Panovich sent in his latest video forecast overnight and it is a good one!  Check it out below.

So the theme of the weekend is cold and snowy.  It is awesome to look at the forecasts for the ski areas and see nothing but snow icons for the upcoming 3-4 days.  I will say that it looks like the NWS has taken down their totals for West Virginia and Wisp down a bit from yesterday, but those resorts are still looking at possible double digit numbers by Monday.  Check out the latest “Most Likely Snowfall” forecast for Winterplace and Snowshoe through Monday.  I love these maps from the NWS this year! 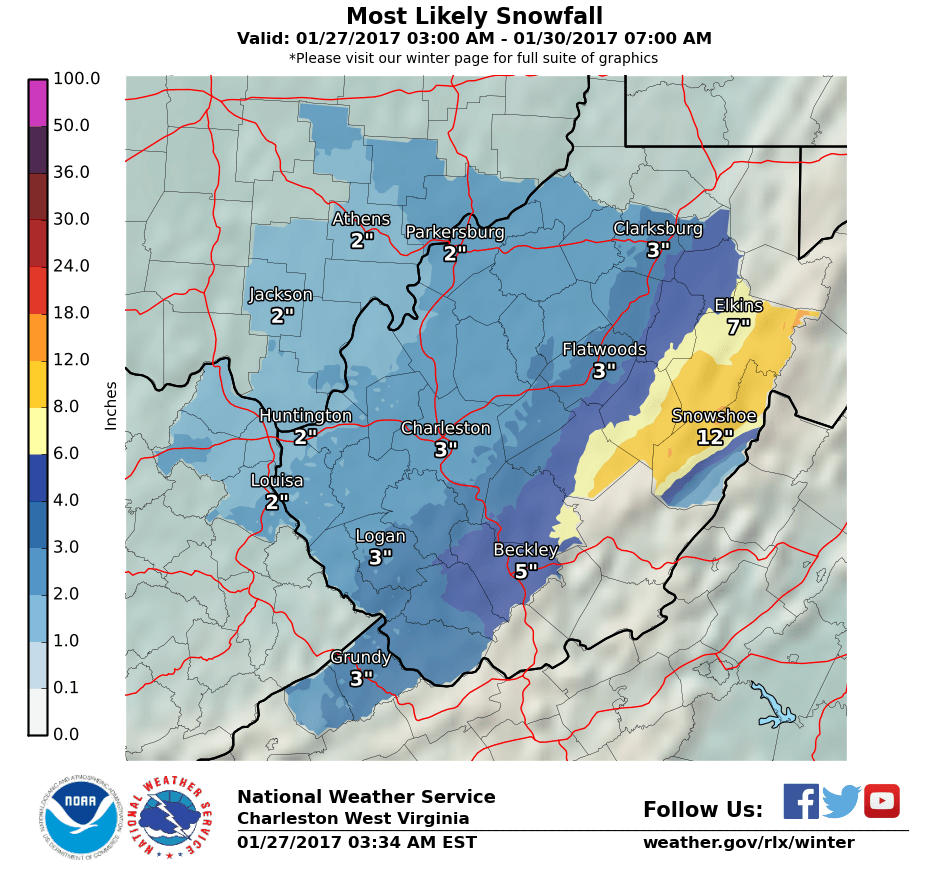 And while the North Carolina resorts will see much less in the way of natural snow, the flakes should be falling for a majority of the weekend and a couple inches will be awesome to see.  It always makes the vibe that much better when a layer of white blankets the landscape.

The better snow looks to arrive Sunday evening/night and into Monday.  I’m sure Mike will keep ya’ll updated on that this weekend, but it does look promising and Monday might be a good day to play hooky!

Whatever happens with the natural snow, look for the snow guns to remain on throughout the weekend at just about every ski area.  I hope that I won’t see any people on social media complaining about snowmaking during business hours, but inevitably that will happen and I will get angry.  We’re coming out of the worst January thaw in recent memory and the resorts need to play catch up and make as much snow as possible.  It has to be done.  If you are skiing or snowboarding this weekend you should expect the snow guns to be on during your visit.  So don’t be that person who goes on social media and complains about it!  DON’T DO IT.

Enjoy the weekend and as always check out the SNOW REPORT page for all the up to date numbers.  That and head on over to Resort Cams to watch as the snow, both manmade and natural, flies this weekend.  It should be fun to watch.

It’s gonna be a good weekend!

Previous Post
Snow and Cold…Finally It’s Back!
Next Post
Ober Gatlinburg to Reopen Ski and Snowboard Slopes Saturday at 11am