After a Couple of Mild Days Winter Weather is Headed in for Christmas!!!

Good Morning!! Winter officially begins later this evening (see POD) but it’s certainly been winter a heck of a lot longer than that around here. And according to SkiSoutheast.com meteorologist Brad Panovich, the winter weather will continue this weekend and we may be looking at, not just dreaming of, a white Christmas…

Lemme break it down for ya! 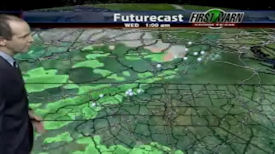 Today we are looking at mild temperatures, we may even get up to 40 today in some places in the High Country. We’ve got mostly rain and sleet in the forecast for right now, so it’s going to be nasty and wet, but then we may be looking at a pretty significant winter storm! The front we’re dealing with right now is much warmer and means rain for most of the area from the North Carolina Mountains up to Winterplace, except for at the highest elevations which MIGHT see a 1/2 inch to an inch of snow, so nothing significant. Snowshoe’s looking at a possible 2 inches.

Then, we’ve got two possibilities for the weekend storm 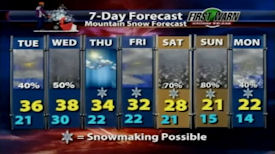 1. Rain – similar to what we’re working with now

2. Snow – More favorable for a lot more snow, and significant snow at that, from the North carolina Mountains to Western Maryland. We’ll know more Wednesday and into Thursday if this storm is going to be northwest flow snow or system snow. To sum it all up, Brad Says we have "solid snow chances" from Sunday into Monday and possibly Tuesday!!

Just a couple of days ago we got a great trip report from our friend and fellow snowsport enthusiast Bill Hamill who went to check out the conditions at Winterplace on the night of December 18th, and thought I would share that with you this morning for some additional light reading…. Bill Hamill writes….

I’ve been itching all week to make my first ski trip of the season, and haven’t been able to ski because of my schedule and the weather. Went to Winterplace for Saturday night skiing thinking 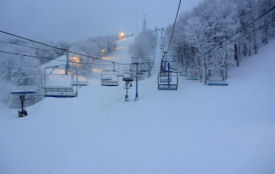 the crowds would be thin. The crowds were very sparse and it was possible to ski onto the lift about every time. I heard the crowd had been thin all day.

<<<  Nice photo on the lift….doesn’t look like it was very crowded!

Snow was firmly stuck to the trees and other surfaces and not just within range of the snow guns. Perhaps freezing rain briefly coated everything before snow fell, and the freezing rain acted like glue to hold the snow in place. The surface conditions were good and probably best described as packed powder to frozen granular. The surface was enjoyable and fairly consistent. The snow seemed to get faster through the evening and the lack of traffic through the day meant the surface was fairly smooth compared to my past experiences. 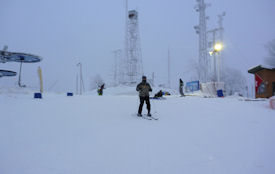 Lot’s of snowmaking was taking place, however it was only directed at closed trails. There was lots of snow around in giant piles and a fair of natural snow too. Tower guns were fired up at Turkey Chute that evening by blow torch wielding technicians. Turkey Chute looked inviting for skiing until the snow guns fired up, however it was closed. Wood’s Run was closed with a big pile of snow at the top and a fan gun blasting the bottom. There was enough natural snow that snowboarders were cutting through the woods and also under the lift that goes to the top of the mountain. While putting my skis on after a break at the lodge I overheard some employees talking on radios about some snowboarders cutting through the woods. I was amused by the APB, and envious of the snowboarder. They must have moved on from the woods run to a less public spot. Later saw some snowboarders coming down the lift line from the top of mountain.It was probably the same 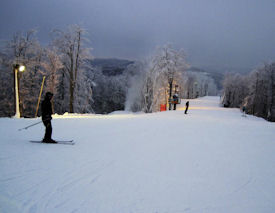 group called out on the radio at the bottom. The cover under the lift looked a bit thin to me for that.

Stopped by a new Mexican restaurant Paco’s loacated in Ghent between a gas station and the ski barn. It’s owned by a former ski instructor at Winterplace. I was very happy that it was open at 10:30 pm, and would stop during future visits. It was a good ending to a great start of the season.

Thanks again, Bill for sending this in. Keep the reports coming. And just to remind y’all we’re still in the hunt for On-Snow Reporters! If you’re interested in helping spread the news about the gloriousness that is the southeastern ski areas, join the team! Sign up on the front page!

And here’s your look around North Carolina….

Appalachian Ski Mountain – 31°- Open today with 12 of 12 trails open as well as multiple features in the terrain parks and all lifts running!

Beech Mountain – 29.4°- Open on 14 of 15 trails. Snowmaking overnight should make for great morning conditions. We are still waiting on Oz to get opened up and after a bit of a warm-up today we should a return to snowmaking temperatures so it shouldn’t be too long!!

Cataloochee – 36.1°- Skiing and riding on 16 of 16 trails today on a 46-80 inch base! All surface and aerial lifts are also open today! Cataloochee WILL be open on Christmas Eve AND Christmas day.

Sapphire Valley – 36.9°- Open for skiing and snowboarding on both trails. Tubing is also open today! Call ahead for session availability.

Sugar Mountain – 27°- NEWS FLASH! Boulder Dash is open for the holidays!! That give Sugar 19 of 20 trails open and all lifts running! Tubing and ice skating are also open. Look for the man in the big red suit and the white beard at Sugar Mountain all week!

Wolf Ridge Resort – 33°- Open on 15 runs with 4 lifts today! FYI the Wolf will close on Christmas Eve at 4pm, be closed Christmas day, and reopen on Sunday, December 26th.