A Nasty Wednesday, December 2nd! Cold and Snow are on the way!

Before we do – on Tuesday we mentioned that we began receiving a lot of questions about cancelling Christmas ski getaway plans and most all were asking our opinion as to "what we would do". We answered based on history, the long range forecast and our educated opinion based on two decades of living here in the mountains. We advised you guys to keep your reservations because we think that the national weather gurus have it right and that we’ll have a snowier and colder winter than normal. We’re seeing the "weather players" beginning to come into effect. Meteorologist Brad Panovich, Joe Bastardi and others have been telling us since September that once we get close to the start of winter (which begins December 21st) we’ll begin to see the Northern and Southern branches in the jet stream of a typical El Niño winter take effect. 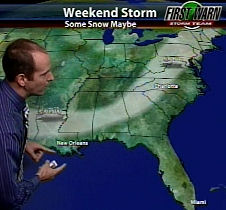 One look at the weather forecast from this morning that was put together by Brad Panovich will show that this is all coming together.

In laymen’s terms what that all means is that the Southern branch of the jet stream will pull up moisture from the Gulf and the Northern branch will pull cold air down from Canada. When the timing of those two branches hit just right, we’ll see significant snows. That is what the forecast is for this storm headed our way right now. We’re seeing the Southern branch delivering a lot of rain right now and once the Northern branch pulls the cold air down into Thursday and Friday, we’ll see some snow. Panovich is forecasting from 2-5" of snow from North Carolina up and into the Virginias.

So we based our recommendation to keep your reservations on that and history. During a typical December, we’ll see the kind of start we’re experiencing right now, followed by some bitter cold, snow and lots of snowmaking ops. With the vast improvements in snowmaking technology added to the mix, we think we’ll have great December to January conditions.

SOME DOUBT OUR COMMITTMENT TO OUR VISITORS

Jon D from Raleigh wrote, "Come on guys we know that you guys get a lot of pressure from the ski people to recommend keeping those reservations. Who do you guys think you’re fooling?"

Paul from Georgia (who had asked us our opinion earlier) wrote, "That was nice of you to include my email in your space. Thanks for being honest. I think I will keep them (the reservation) and hope for the best. I trust your site more than any I’ve ever looked at because I have seen 1st hand that you guys tell it like it is. Once again thanks for an honest answer!"

Thankfully we saw a lot more emails like Paul’s than Jon’s but the truth is this site is dedicated to "no bull" reporting. Case in point is this past Monday when we reported on Sugar’s "hard core" conditions and that we felt that they were probably open only to keep a consecutive opening days streak alive. However, one day later on Tuesday (after about 12 hours of snowmaking) Sugar was looking p-r-e-t-t-y sweet.

To borrow the byline of a popular cable netword news channel, "We report. You decide." We’ll always give you guys our honest assessment of what’s happening around the region and to that end…let’s get to it today.

WHAT’S HAPPENING AROUND THE REGION? 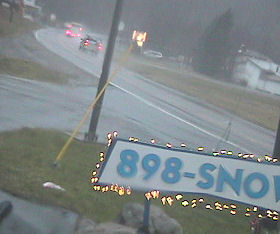 <No snow at 7am this morning!

Yuck! That’s what’s happening! We’re getting some scattered reports of moderate to heavy rain, sleet, wet snow, and even some nasty wind thrown in. One reporter told us of a 4am ice storm around Sugar and Beech this morning. Beech and Sugar are reporting some snowfall in the last 24 hours but there’s no sign of that as of 8am this morning. Any kind of frozen precip that might have fallen was gone with the rains when we began looking around at 7am.

The Community Colobrative Snow Reporting peeps around the region (thanks to Baker Perry for all of those links) showed that several reporting stations on Sugar and Beech reported in with ZERO snowfall this morning.

Meteorologist Brad Panovich is calling for a "storm alert" with the first portion of it happening right now with all of this rain and nastiness. After we get through today, he is forecasting SIX STRAIGHT DAYS of snowmaking weather! Beginning on Thursday we should see temps in the teens and 20s through Monday with at least overnight snowmaking temps through the period. Do you know what kind of snow these resorts can lay down with SIX days and nights of snowmaking?

Let’s give you guys and idea…

That sounds pretty impressive huh? What makes that even MORE impressive is the fact that there is not ONE speck of snow on any of the slopes or terrain parks at this moment.

Drew Stanley dropped me a quick email on Tuesday to remind us to share this cool news with you guys. Remember that on opening day at Appalachian – the first 100 guests will SKI OR RIDE FREE with a free lift ticket for that day. Additionally because this particular opening day falls on their annual Anniversary weekend everyone else will ski or ride for only $5! That’s a $5 lift ticket for all day skiing! All of this will be taking place along with the fact that App will also be hosting one of 13 Rome Pre- Jib events in North America on opening day as well!

App will also begin night skiing on a seven nights a week schedule as of Sunday. They will expect to be making dry, skiing-quality snow with their 20’ tower guns during the night session.

We missed that one. According to a couple of emailers, Hawksnest opened on November 28th and a fair number of people enjoyed snow tubing and/or zip lining.

Sugar Mountain is "open" for ducks and mud wrestling enthusiasts for today. Hats off to them for weathering the weather. Things looked horrible there on Monday, great on Tuesday, horrible today and by Friday morning you’ll think you’ve gone to winter heaven. This has been a crazy week.

On Tuesday I wrote that only Snowshoe of the West Virginia ski areas had made snow thus far. My buddy Joe Stevens corrected us as Canaan Valley made snow over the Thanksgiving break and plan to as soon as temps drop again and that should be Thursday sometime. Canaan Valley plans to open December 11th. Here’s more:

Canaan Valley – 32° – CV plans to open December 11th and they saw a little more snow on Tuesday according to David C. Lesher’s weather center based in Tucker County, WV. That takes Canaan Valley to 11.7" of snow on the season.

Snowshoe Mountain – 38° – A mix and rain and snow is in the forecast for Snowshoe on Wednesday and then SNOW is in the picture for Thursday, Friday and Saturday, with great snowmaking ops for the long term forecast as of today. That will make for a great opening day and weekend for those headed that way! Snowshoe plans to open both the Snowshoe and Silvercreek sides of their mountain for Saturday so there will be a lot of terrain open and night skiing this weekend at Snowshoe.

THAT’S ENOUGH FOR TODAY. Enjoy your day and let’s all THINK COLD AND SNOW and it will come.

Send your comments, photos, videos and reports to [email protected]