It’s Saturday, March 26th, 2022 and it is the last weekend of the 2021-2022 Ski & Snowboarding season for the Southeast and mid-Atlantic ski resorts and it will be a nice one for the four ski areas still operating for today. Two inches of natural snow has fallen and in fact, it was snowing about as hard as I’ve seen it snow all season long at Canaan Valley Resort and Timberline Mountain this morning. Snowshoe Mountain also reported 2″ of snowfall and we’ve even seen a light, dusting of snow atop Beech Mountain Resort and Sugar Mountain this morning.

Here is a quick video tour that I captured this morning showing some of the snowy ski mountains.

Three of the four remaining open ski mountains are located in Western North Carolina and Snowshoe Mountain is the lone ski mountain open in West Virginia.

I’ve been covering the region’s ski news for twenty-six years now and it isn’t often that we see conditions that are as decent-to-good for Spring skiing and snowboarding this late in the season. There have been times when we’ve made it to April 1st or 2nd, but to see good, side-to-side snow coverage this late in the season without a ton of bare areas on the main slopes is pretty strong. 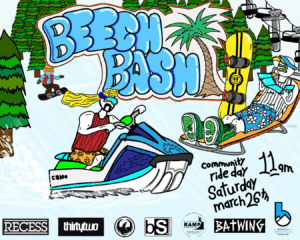 Beech Mountain Resort is actually making TODAY, Saturday, their closing day for the season and they are hosting their first ever (inaugural) Beech Bash. There’s not a lot available as to what it entails, but it seems to be a park event, community ride day at Beech. Love the graphic!

Sugar Mountain Resort is still operating as if it is mid-January as they are open for day sessions and night sessions tonight with 9 slopes and trails.

Snowshoe Mountain Resort is still leading the region with 27 slopes and trails open and quite impressively that includes Upper and Lower Cupp Run. Amazing.

Cataloochee Ski Area is only open to their mid-station today with 4 trails open, but there is good coverage side-to-side.

Saying Goodbye With Another Season in the Books

We will save our official “goodbyes” until tomorrow. Be sure to check back for the last FirsTrax post of the 2021-2022 ski & snowboarding season. It’s been a quirky season to say the least. Unlike last season, none of the resorts will be reporting record skier visits this go around. However, even though there was a snow drought of near-epic proportions this season and even though we got off to a sluggish start for some ski areas, it turned out to be a pretty good skier-visit Holiday year with good weather and strong attendance for the Christmas-to-New-Year, MLK and President’s Weekends.

We only had 3-4 rainy weekends season-long and even though we only saw 2″ or so of snow in December and only 20″ or so combined in February and March – JANUARY was a nice, snowy month with really great conditions for that seven week stretch from January through nearly the end of February.

Seems like ALL of the weather gurus got it wrong in terms of natural snowfall this season. I was reading a local, social media post where some guy was complaining about the lack of snow and he was ribbing local weather dude, Ray Russell of Ray’s Weather. Prior to each Winter, Ray gives his “Fearless Forecast” and while he DID predict 20% less snow than the long-term average, he also predicted snowfall totals that would be ABOVE the 10-year average, which would have meant that areas like Beech Mountain and Sugar Mountain would have seen 70″ of snow.

Sugar Mountain Resort fell nearly TWO FEET less than that prediction of 70″ (they had 46.5″) for the season. Beech Mountain, which normally averages 80″ each winter only saw 49″ during the 2021-2022 winter.

We have previously reported the season snowfall totals for all of the ski areas this winter, but even with this late-season, 2″ of snow overnight, Snowshoe Mountain Resort will end up OVER EIGHT FEET short of their normal 180″ seasonally. Their total of 83″ of snow this winter is 97″ short of the marketing average.

Some hope endures though, because as it seems to happen throughout the ages, after an off year of snowfall, we seem to have some nice bounce-back years. 112″ of snow fell at Snowshoe during the 2011-2012 season – followed by a 189″ the next winter. We saw 100″ during the 2016-2017 season, followed by a near-normal 173″. Then again, we HAVE now seen less than 90″ of snowfall during two of the last three winters.

…but we can think positively, right?

Enjoy your day and check back tomorrow for my last FirsTrax ramble for the season as well as Joe Steven’s annual Snowies awards. We’ll pass on some stats for the season and hand out a bunch of thank you’s as well.

Til then…here are some photo captures for today.