I’m sitting here with my hands full this morning first finding out that our server was out of space (again) for the third day in a row. (Handled that.) I checked Brad’s Skier’s Forecast Video (Handled that and will update you more about that forecast in a second.) Handled several phone calls because we’ve been out of the office over the Holidays…and I’m on the telephone when an older couple came walking into my office around 8am and asked me for directions to Sugar Mountain.

What are the odds that this couple would pull into our parking area, pick our offices out of the several in this complex and come in and ask for directions? …to Sugar!??

…and it’s cold! At 4pm Sunday afternoon I was over in Banner Elk and it was 10° and the winds were howling to the point that you just couldn’t stay out in it unless you were totally covered up with face mask, good gloves, head covered, etc. I had a good coat and gloves on but no hat and no face covering as I was just trying to throw a few bales of hay out to our horses and I had to jump back in my truck twice just to accomplish that task!

Even with good gear skiing and riding yesterday had to be an adventure!

Congratulations to Sugar Mountain’s High Country Junior Racers as they dominated the first HCJRS races of the season held on Sunday.  Sam Bauer, the six year son of my good friends Len and Michelle Bauer, finished first in the 6 & under boys category. (Len is Sugar’s longtime head of Ski & Snowboarding Instruction.)

I’ve posted ALL of the results of this first race of the season at the end of today’s story!

This morning we’re seeing temps from ZERO at Beech and Sugar in North Carolina; MINUS 5° at Canaan Valley, MINUS 1° at Snowshoe Mountain and although temperatures are slightly "milder" in Virginia – they are still in the low teens to 9° at Wintergreen Resort.

It has snowed most everyday lately although measureable snow was kind of spotty on Sunday. Cocorahs is reporting a TRACE at Cataloochee Ski Area in Maggie Valley, NC. One-half inch of new snow fell at Sugar and Beech Mountains; Canaan Valley and Timberline Resort in West Virginia picked up another 2.3" of snow and more than a foot now in the last 72 hours. Snowshoe reported another 3" of new snow and 14" in the last 72 hours. Crazy thing is that that isn’t as impressive as the fact that they’ve seen perhaps 28" of snow in the seven or eight days! As I said, it has been snowing some measureable snowfall nearly every day at nearly every resort in the region.

The exception to that are the Virginia resorts which have seen no measureable snowfall in the last few days.

I’m starting to get the feeling that most meteorologist must get when they are reporting the weather during most SUMMER DAYS. How many ways can you just say, "The forecast is for blue skies, normal highs and nice weather?"

Nobody really cares much about watching the weather shows during the summer unless there’s a hurricane coming because the weather is generally the same from day to day unless a huge heat wave is in effect.

TYPICALLY in the midst of most winters, we have such volatile weather that changes from one day to the next with wild swings in weather patterns and temperatures that we have "NEW" news to share each day. RECENTLY all we’ve had to report is the same thing:

5. You guys should come!

Truthfully THAT summary has applied every day lately and according to all of the weather gurus out there, including our meteorologist Brad Panovich, we’re in for several more days of brutally cold temps, more snow and awesome ski and snowboarding conditions. 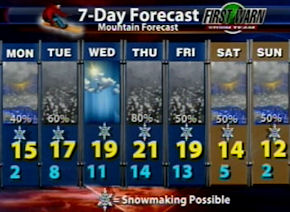 Brad has been providing us with some awesome forecasts every other day all season long and he basically has averaged the temperatures for our southeast and mid Atlantic ski resort region and his Skier’s Forecast Video update today shows more of the same! We should expect highs in the teens and low 20s and lows in the near zero degree range to perhaps low teens from today through the forecast period which carries us through Sunday! In fact, he said that today and Tuesday will be cold (ya think!) and we’ll see a "mild up" with highs Wednesday and Thursday that might reach the low 20s and then it will get COLDER yet. Maybe even colder than this PAST weekend – for this coming weekend! Highs Saturday and Sunday are expected to be in the 10° to 14° range with lows near ZERO – again.

Oh yea…and more snow. Brad is forecasting 2-4" of snow tonight into Tuesday for the North Carolina Mountains and as much as 6-8" MORE SNOW into West Virginia and Maryland ski areas! After a brief pause between storms and no snow on Wednesday he is expecting MORE SNOW Thursday and Friday.

So if you can believe it – get ready for even colder air and more snow! Brad informed us that there’s a system brewing that might add some more moisture to mix in with these frigid temps later in the week that might create another significant snowmaker for the region.

IS THERE ANYTHING BAD ABOUT THE WEATHER LATELY???

That question was posed by a few viewers over the weekend and the truthful answer is "yes" and "no". No – we’d like as much cold and snowy weather as we can get because that is what creates the excitement and generates the crowds. The cold and snowy stretch that kicked in about three weeks ago was perfectly timed to get all of the ski resorts in "Holiday shape" and obviously every resort operator and visitor was appreciative of the fabulous weather we had over the Christmas to New Year break. We haven’t had time to speak with many marketing people yet, but the early call is that some ski areas will have nearly DOUBLED the skier visits that were turned during the 2008-2009 Holiday ski period. Some ski areas might have broken some Holiday traffic records…and we’re betting that ALL ski areas did quite well during the December 21st through January 3rd period – although some may not have pulled quite the traffic they’d hoped for.

Regardless, traffic was great over the last few weeks.

However, for the last few days these frigid temps have had the added "issue" of some high winds. When zero to ten degree temps combine with 25-40 mph winds that begins to make people stay away in the massive numbers that we’d expect for peak weekends.

Watching some of the webcams at several resorts this past weekend, I can say with certainty that traffic was brisk on the slopes, but at times there might have been more people in the lodges, bars, and cafeterias – which is not a bad thing either!

When wind chill temps dip below zero (which they’ve done a lot lately) skier participation out on the slopes dips as well. If left to the ski resort management teams, they’d opt for a forecast something more like 25°, no wind, about 2-4" of snow with none on the roadways. That kind of mix makes for the best of all ingredients to insure high skier traffic at the ski areas. Beggars can’t be choosers however, so we’ll take all of this brutal cold and some high winds over a mid-winter thaw any day of the week.

It looks like we’re in for some more breezy days with winds in the 15-25 mph sustained variety with gusts in the 40-50 mph range for this evening, Tuesday and Wednesday. Right now the late week and weekend forecast looks colder and snowier with little in the way of wind so the forecast is for POWDER, great conditions and nearly 100% open terrain at YOUR favorite ski resort.

Be sure to check out the 24, 48, 72 hours snow totals via the front page and the season total snowfall amounts for each resort that we have posted on the Snow Report page. Those numbers have done some serious climbing of late and with the forecast for this week – we’ll expect to see those go up even more!

Make note of trails open if you’re planning to go ride this week as several ski areas are rotating closing slopes to dedicate snowmaking on them to insure the best riding conditions for guests. Several ski areas will only be making snow at night now that they’ve built base depths that are approaching or exceeding 100"!

Beech Mountain Resort is hosting their annual Winterfest Festival this weekend and we’ll share more about that cool event on Tuesday and Wednesday. They always have a ton of great fun with that event as they host a cardboard box derby and bathing beauty contest among other things. With temps in the single digits and teens – that bathing beauty contest should be interesting! Beech has some great looking peeps that participate in that event! Guys?!?!! Make plans to be there.

That’s it for today….

Previous Post
January 04, 2010 – Artic Air and MORE Snow!!
Next Post
Extreme Snowboard & Skis Across from the entrance to Sugar Mountain!