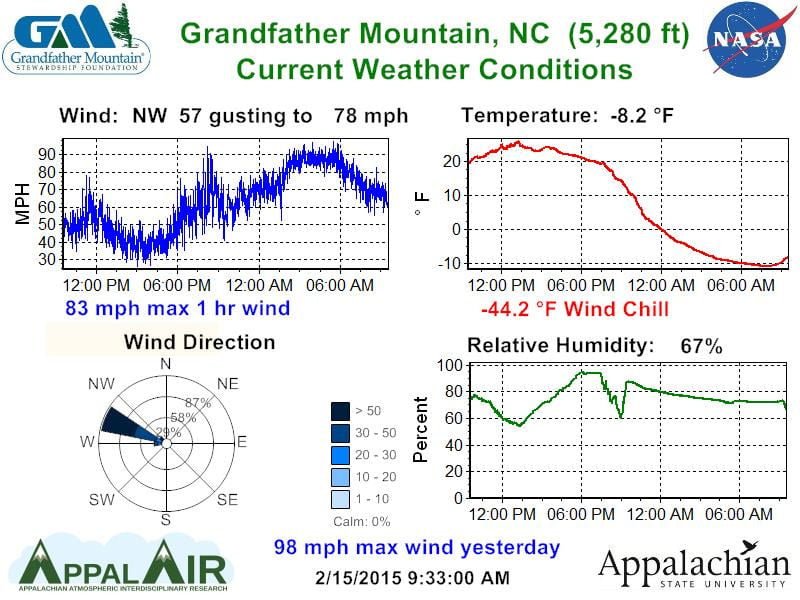 I had to share this capture of the temps and maximum winds recorded this morning atop the Mile High Swinging Bridge at Grandfather Mountain this morning!

Saturday was a VERY unusual day. It started out sunny and the winds didn’t seem as blustery as they were for forecasting. Around 2pm or so it clouded up and began to snow. I was with friends up on Beech Mountain and Fred’s Deli was closed so we checked out the Brick Oven Pizza and the place was hopping. The pizza was awesome and saw a couple of Valle Crucis kids working there. “Hi” to Ben Hauser and Alli Workman.  When we left there is was really snowing hard.

Of course as we got back down to Sugar and then further down the mountain to Seven Devils – it was only flurrying. I couldn’t help but re-live what we’ve seen thus far this season. It could be BOMBING snow up at Sugar and Beech and thus far this season we’ve probably seen MAYBE 5-7″ of accumulating snow – total – on the entire winter so far.

Around 9pm last night THAT changed as it was snowing harder than I’ve seen it all season long. We still only received about 1.5″ of windblown snow here at my house, but with the way things had gone thus far – we’ll take it. I’m thinking that there’s enough snow to build a snow-rabbit on my deck. Okay, MAYBE a little bit more.

As I tour the area, it looks like there’s some significant totals around the region. Blowing Rock ALSO FINALLY got some accumulating snow. App is not reporting it but Ray Russell claimed 1.8″ of snow fell up until 8:30pm last night and a CoCoRaHs reported over there emailed me that they had 2.5″.

Ray Russell’s BooneWeather.com is running REALLY REALLY SNOW this morning so he’s PROBABLY getting some good visitation this morning.

ResortCams.com hasn’t set any records this morning (maybe because a LOT of people are vacationing this holiday weekend) BUT we saw 27,274 visitors yesterday and 124,994 pages viewed. That’s JUST on Resort Cams. SkiSoutheast and all of our weather content are getting bombed right now. Everyone loves snow!

SO WHERE DID THE MOST SNOW FALL?

Beech Mountain reported 4″ of new snow. Sugar only reported 2″. It seems that I am ALWAYS “correcting” their report. A-c-t-u-a-l-l-y they saw 3.2″ of new snow according to one of our CoCoRaHs reporters atop Sugar Mountain.

Winterplace Resort reported 5″ of new snow; Canaan Valley & Timberline reported 4-6″; but THE BIG winner in terms of natural snowfall was SNOW PRONE, Snowshoe Mountain with ANOTHER 9″ of new snow. That number takes them to 20″ in the last 48 hours!

The COLD TEMPERATURES are the big news this morning and the coldest spots the Southeast and mid-Atlantic were Beech Mountain’s MINUS 12°, which was matched by Snowshoe Mountain and Canaan Valley. Wisp Resort reported MINUS 8° this morning.

IT’S A LITTLE BREEZY OUT THERE!

As I was wrapping up this post this morning I thought I’d check out where the highest wind was spotted. Try atop Grandfather Mountain this morning at the Mile High Swinging Bridge. At 9:30am the max wind was NINETY EIGHT MILES PER HOUR!!! 98mph with a wind chill at MINUS 44.2°!

THE “OTHER BIG NEWS???” (THE BURNING OF FRANKIE THE SNOWMAN MIGHT HAVE WORKED!!!)

Of course THE FORECAST! After all of this snow of the last few days and this week – there is from 4-8″ of snow forecasted for Seven Devils and Beech Mountain beginning overnight tonight, Monday and Monday night. Snowshoe Mountain is forecasted to see another 3-5″ of snow but we’re thinking they will see more than that.

If you guys missed it, remember that we burned old Frankie the Snowman two weekends ago. So we’re taking credit for all of this snow that seems to be filtering down into North Carolina.

See the video below:

LET’S SHOW YOU GUYS AROUND THE AREA:

Snowshoe Mountain” -12° | 9″ of new snow | 20″ in the last 48 hours | 107″ on the season. If you are BLESSED to be riding at The Shoe today, they have some awesome POWDER conditions with all that snow. Bundle up as it will be RAW out this morning with those -12° temps AND the HIGH for today is only meant to hit MUNUS 2°! Of course those POWDER conditions will be well worth the cold! Snowshoe is playing on 57 of 60 slopes and trails.

Swing by the nearest retail outlet and stock up on hand warmers, wool socks and cold temp wax. Snowshoe is also advising us to “Keep in the loop for some exciting news!”

Check out this page: http://www.snowshoemtn.com/lp/ridiculous.aspx

This is like the WORST KEPT SECRET on the Planet unless you’ve just NEVER skied at Snowshoe before. We’re under an EMBARGO such that we cannot share the news just yet. However, we’re pretty certain that most of you know what’s coming. Get your credit cards ready. We’ll share the news on TUESDAY.
Winterplace Resort: 4° | 5″ of new snow | 33″ on the season | Groomed, Powder & Packed Powder conditions on 100% of their 27 slopes and trails.

Timberline Resort: -8° | 6″ of new snow | more than a foot of snow on the ground | 97.7″ on the season | Powder, Packed Powder & Groomed conditions on 35 of 41 trails. Timberline is ALSO reporting 17km of cross-country terrain open with 10″ of natural snow base!

Since Virginia has always been such an important and influential state when it comes to politics, presidents and history – AND since they are the “Virginia is for Lover’s” state…I’m going to go THERE next on our tour.

Massanutten Resort: 0° | 2″ of new snow | 16″ on the season | Groomed conditions on all 14 slopes and trails and SNOW TUBING is SOLD OUT for today!

Bryce Resort: 3° | 1″ of new snow | 24″ on the season | Groomed conditions on all 8 slopes and trails. I had to chuckle at their morning post as it said that it was “a little chilly” out this morning! Today’s high at the smallest ski area in the state will only be 15°. Yep, that’s chilly.

Wintergreen Resort: -5° | trace |10″ of snow on the season | 100% open with groomed conditions on all 25 slopes and trails. They are only reporting a TRACE of new snow but they made a ton of new snow.

Sugar Mountain: -4° | 3.2″ of new snow | 43″ on the season | 100% open with Packed conditions on all 21 slopes and trails. Not sure WHO is handling the update over there this morning, but WHOEVER it was only reported 2″ of new snow and we’re seeing 3.2″ of new snow according to one of the CoCoRaHs reporters who (we’re told) lives up at The Reserve atop Sugar. It will be a COLD day for High Country Junior Race Series Championships that are scheduled for today will be at noon.

Sapphire Valley: 15° | No Snow | 1.5″ on the season | Groomed conditions on BOTH slopes they have and tubing is open as well

Bundle up peeps and have fun in all that POW out there!