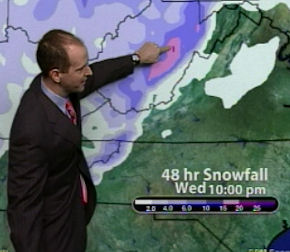 Brad Panovich started his Skier’s Forecast video off this morning by saying that the snowy, northwest flow snows that we’ve been experiencing for the last month will continue for the next month! He quickly adds a statement that he’s now said a few times this season and that is, "…we could measuring some of these in FEET!"

We’re seeing some light to moderate snow this morning here in the High Country, but further north all of the West Virginia ski areas are seeing band after band of snow that is hitting the area. Brad explains that the cold air is picking up more moisture than normal from the Great Lakes because the lakes, which are normally frozen over this time of year – aren’t!

That moisture and snow will make its way into the North Carolina mountains with some additional accummulation, but the West Virginia and Maryland ski areas will see a MINIMUM of another, additional FOOT of snow between now and Thursday AM, and Brad’s thinking it could be two feet!

His 48 hour snowfall forecast is for 4-6" of additional snow into the North Carolina Mountains and 15-20" of new snow for the WV ski resorts. Brad singled out Snowshoe Mountain and stated, "Snowshoe, count on getting another 25" of snow!"

Since this weekend is our SkiNC / Beech Mountain Summit weekend, Brad mentioned that as of right now that he’s holding to a 40% chance of snow for Saturday. He added, "Don’t be surprised if we don’t update that on Thursday morning for additional snows."