Snow in the Forecast! Is Snowmaking in the Immediate Forecast as Well? 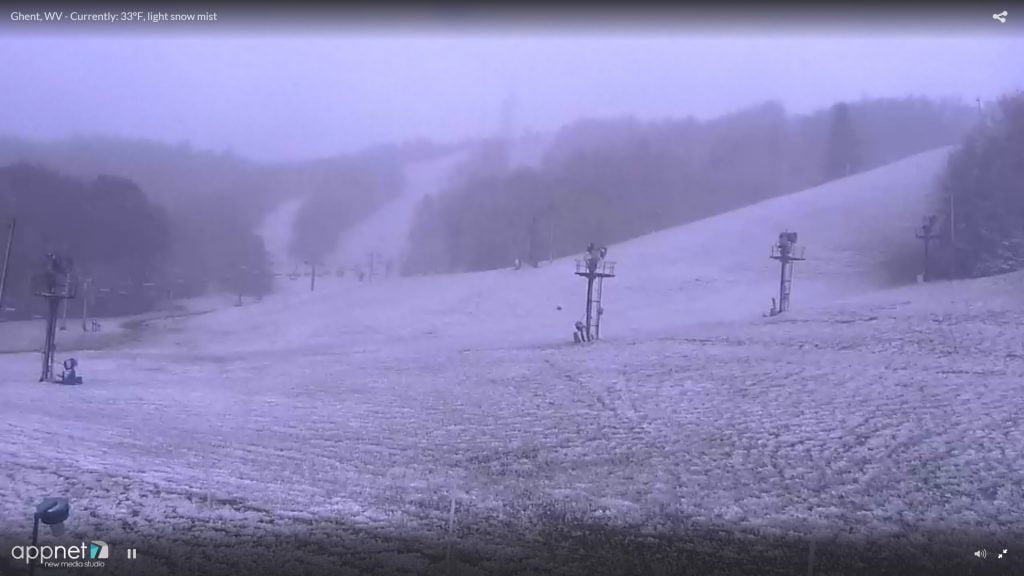 …let’s get this out of the way quickly. No, I don’t think we’ll see any REAL snowmaking efforts just yet.

However – it IS SNOWING and pretty moderate-to-heavy at Sugar and Beech Mountain as of 11am.

I can tell you that it has been snowing lightly around MOST of the high elevations nearly all day. The heaviest snows were witnessed atop Beech and Sugar Mountains and I also saw some decent snow falling atop Snowshoe. However, the snow isn’t sticking at most locations…and even then only on grasses. The most snow we could see on the ground as of 3pm is at Winterplace Resort.

I also received reports about moderate snow falling (but not sticking) in Boone, Blowing Rock and various locations around the High Country.

As I looked at the forecast this morning, I noticed THIS on Weather.gov where they are reporting HEAVY SNOW for Snowshoe Mountain in West Virginia. However, a little further digging provided that there IS 1-3″ of snow in their forecast for this evening. That’s exciting, right?!?! 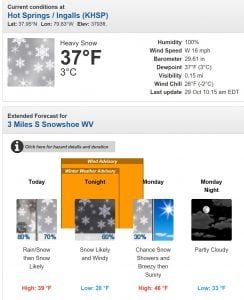 However, the low temps at their 4848′ elevations are 28° for Sunday night and then only 33° for Monday and Tuesday evenings. However, there are showers forecast for the week ahead. So I don’t THINK there will be any snowmaking efforts happening at Snowshoe just yet. That would have been a little early for Snowshoe anyway.

…additionally, there’s no snow happening just yet at Snowshoe.

It IS SNOWING ATOP BEECH AND SUGAR!

As I looked around the LIVE CAMS via ResortCams.com, I saw it snowing atop Sugar and Beech ski resorts. It is 26.5° atop Sugar’s Summit and we’re seeing slushy snow at the Sugar Ski & Country Club live webcam. See: http://www.resortcams.com/webcams/sugar-ski/

That prompted more weather research and 1-3″ of snow is forecasted for the higher elevations of Sugar and Beech Mountains. More importantly (as far as snowmaking is concerned), low temperatures are expected to dip down to 24° Sunday night.

If you read our BLOG on Friday morning, you’ll know that we heard some chatter about the possibility that one or more ski areas would think about a quick window of snowmaking and getting open for even a day or two. However, as we’ve now gotten to that potential, cold-weather, window of opportunity – it doesn’t appear that it will be cold enough, long enough for any possible snowmaking – other than a test of their systems.

So unfortunately we don’t think we will see any Halloween skiing or snowboarding this 2017-2018 season. Temperatures are meant to mild up even more as we get into the end of next week.

So, keep the faith, ski and snowboarding season will be here before we know it.

Email me any thoughts… [email protected]

Previous Post
Ski 3 Days For Just $169 at Snowshoe, Hurry Passes Are Going Fast
Next Post
Rolling Into a New Season