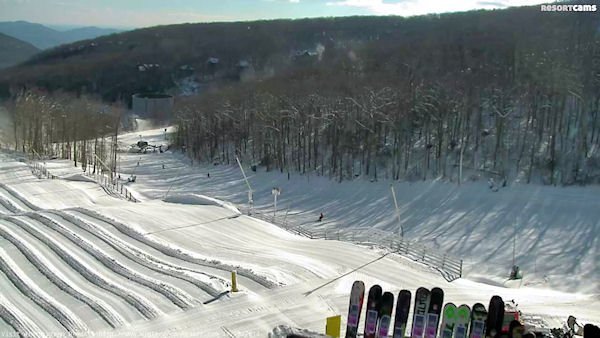 ONLY SIX OF SEVENTEEN SOUTHEASTERN SKI AREAS ARE NOT OPEN NOW; HERE’S THE ONES THAT ARE!

You guys know that I am all about numbers so I have a bunch of them to share with you guys today. The most impressive number this morning is “17”.  That number represents the natural snow on the ground at Snowshoe this morning. They saw another 5″ of snow in the past 24 hours, 17″ in the last 48 hours and 20″ in the last 72 hours. This is all reporting directly from the NWS reporting station on the mountain. That’s 33″ on the season for Snowshoe’s 4848′ elevation.

Davis, West Virginia’s Timberline and Canaan Valley Resort picked up 16.9″ in the last 48 hours according to NWS reporting from David Lecher.

The next closest to those three ski areas is up on Beech Mountain where 8″ of snow has fallen in the past couple of days and Beech now has already seen 24″ of snow on the season. REMINDER ALERT!!! It’s still November!

Check the SNOW REPORT FOR ALL THE DETAILS, BUT HERE ARE SOME NOTABLES FOR EACH SKI AREA:

Resorts That Are Open:

Beech Mountain Resort – OPENS TODAY! 9 Trails are OPEN as well as Terrain Park. Beech has seen about 8″ of new snow (with 6″ of it coming in the last 24 hours) and 24″ on the season! They are open for DAY sessions on Friday. 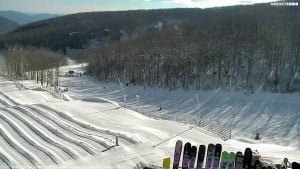 Wintergreen Resort – OPENS TODAY! They will ski and ride on SIX trails for DAY SESSIONS ONLY TODAY and on a base of 24-36″ of snow. They’ve seen 8″ of natural snow on the season and things look awesome at Wintergreen for OPENING DATE!

Winterplace Resort – OPENS TODAY! They have a base of 28-52″ with 6″ of natural snowfall recently and 14″ on the new season. They will operate for DAY SESSIONS ONLY today with 10 trails.

Snowshoe Mountain – Talk about a faux pas! Ouch. THOUSANDS of people received this email snow report this morning that says that Snowshoe is CLOSED. Oops. 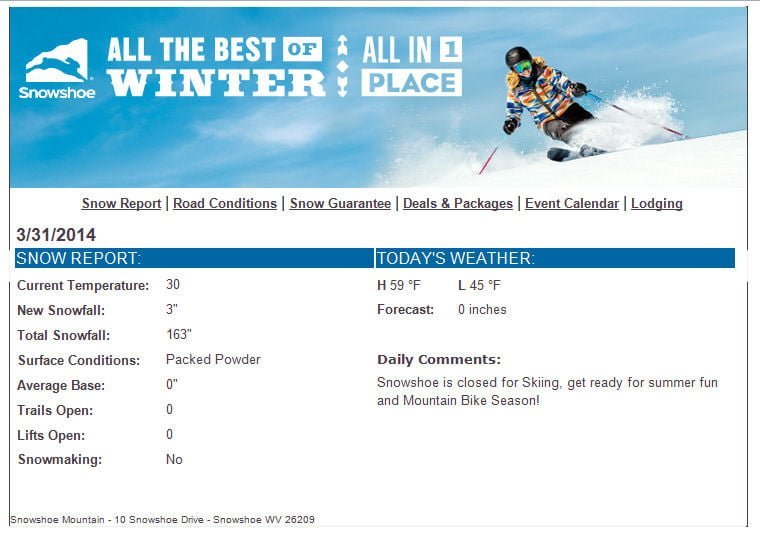 They ARE OPEN with 12 trails with a POWDER DAY after 20″ of snow has fallen within the last 24 hours and now 33″ on the season. Snowshoe will be operating for DAY SESSIONS ONLY today.

EDITOR’S NOTE: Snowshoe’s numbers are reported by the NWS station on the mountain and they are showing 17″ of snow ON THE GROUND right now! Things have to be pretty sweet for guests who are on the mountain today.

Wisp Resort – OPENS TODAY! They only have their WISP TRAIL open but that’s a good one. They are also offering Tubing AND the Mountain Coaster. They are reporting a “one-number-average” base (which we like) – 18″ base. Wisp has seen 2″ of new snow in the last 24 hours, 11″ on the week and 15″ on the season.  Good GRIEF these guys could use new webcams…

Appalachian Ski Mountain – Open with all NINE Trails and TWO Terrain Parks. They saw about an inch of new snow and about 2.5″ over the last couple of days and they are looking awesome with snowmaking going on as well. App IS open for day and night sessions. App has seen 7″ of snow on the season.

Cataloochee Ski – Open with EIGHT trails, terrain park AND tubing on a 26-40″ base and they ARE open for day and night sessions. Cat has seen 6″ of snow from this storm and 15.5″ on the new season. Awesome conditions over in Maggie Valley.

Sugar Mountain – 11 trails and TUBING open. Great conditions. They are report 10″ of snow from the storm but that IS a bit inflated. If Sugar got 10″ then Beech had 15″. Beech DIDN’T get 15″ (they are reporting 8″) so will give Sugar the same 8″ and that’s probably pretty accurate. Sugar has seen 21.5″ of snow on the season. They are open for day and night sessions.

Bryce Resort – 26° – 4″ of snow from the storm. THEY WILL BE OPEN TODAY after 10am…but: No report available for slope openings as of 9am. We’re thinking they will offer 4-5 trails. We advise calling ahead.

NOT READY FOR PRIMETIME:

Canaan Valley – WILL OPEN SATURDAY. They wrote, “It’s official – the ski area will open on Saturday, November 29th for the 43rd season. Grab your gear and head to Canaan Valley Resort! Internet deals are now available.

EDITOR’S NOTE: I’ve said it before but I wish EVERY resort had the data reporting for snowfall that David Lecher and those guys have for Davis, WV.

Wolf Ridge – NO REPORT – However according to the NC Ski Areas website they aren’t even making snow. But then again the NCSAA is reporting no snowmaking at Beech this morning and THEY ARE…We’ve reached out to them, but have had no response.

DID I BLINK AND MISS THE MEMO???

I’ll admit that I haven’t looked at the SoutheastSki.com website since last winter, but with a few resorts NOT reporting any new news…I figured I’d see if the SSAA had any news on them. I went to the old website address and it didn’t come up. I searched Google for “Southeastern Ski Area Association” and WE COME UP. I searched “Southeastern Ski Report” and WE COME UP.

CLOSING COMMENTS – LOTS OF THEM…

Our Beautiful, Awe-Inspiring Mountains Are Great for More Than Just Skiing and Snowboarding

Snow. It simply makes e-v-e-r-y-t-h-i-n-g more special. Thanksgiving was no doubt an awesome day to be on the slopes. Our own Kenny Griffin called me from Sugar Mountain on Thursday mid-morning and his voice carried that noticeable spark that comes from “one of those days” on the mountain. He told me that Sugar was ‘S-W-E-E-T’ and I’m fairly certain he injected at least three or four more adjectives to describe how great the snow was. He also shared the fact that Sugar’s newest trail, “Gunther’s Way” was “awesome”. (Kenny uses that word a lot when he’s on the mountain.)

I’m certain that Kenny, Will Mauney and perhaps our resort marketing partners will be sharing some on-snow fun and we’ll share those photos and videos as we get them. For this morning, though

Light snow fell for most of the morning hours. This was one of those snowfalls that was very elevation specific. I live at 3300′ and while it snowed on and off all day, we had barely more than a dusting on the ground until the sun set late on Thanksgiving day. Then we saw around 1/2″.

Just up Hwy 105 as you reach Tynecastle in Banner Elk, the ground was covered with PERHAPS 3″ of snow. Ditto that for the base area (entrance) of Sugar Mountain. As of around 8pm Sugar reported 9″ of snowfall from the 48 hour storm. However just for the sake of “NO BULL REPORTING” there is not that kind of snow on the ground over there.

I wouldn’t doubt one bit that Sugar saw 9″ of snowfall. However this was one of those snowfalls where it snowed and melted and snow and melted over the two day storm.

In fact it was snowing so hard up there at around 2pm that only diehard skiers and snowboarders would have been on the slopes.

ALSO, WHATEVER IS on the ground at Sugar – add 4-5″ and you’ll have what IS ON THE GROUND up on top of Beech Mountain. The weather on top of Beech’s 5,000’+ elevations was VASTLY different from that at Sugar and Banner Elk when I visited BOTH locations yesterday.

The craziest part of the day was as we were driving down Beech Mountain Parkway, the roads were covered in snow, AND with vehicles attempting to make it up the hill (and unsuccessfully so).

Just down Beech Mountain Parkway as it meets Hwy 194 near Lees-McCrae…the roads were clear. It was snowing so hard though that I remarked to my family that the storm appeared to be “socked in”. 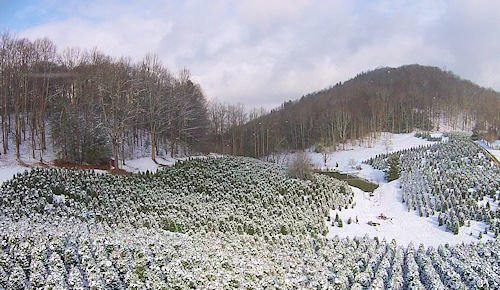 No more than ten minutes later, as we drove down Hwy 105 to around the entrance of Hawksnest and Seven Devils…there was NO SNOW and the darn sun was shining!

It was snowing, but only lightly so we decided to take the family to do some Christmas tree hunting. You see, Thanksgiving Weekend is also the “real start” to the mountains’ Choose and Cut tree season. The only thing better than choosing a Christmas tree with your family, is doing it in the snow.

We took a little bit of video to show you guys the difference in the weather, the snow and the roads on Beech and then literally just fifteen minutes down the mountain. We’ll post that in a bit.

First, if you’re already skiing and/or riding at any of our mountains ANYWAY, we’d like to have you send us photos, videos and reports from your experience on the mountain. If you’re good at it and on the snow quite a bit – we’ll probably recruit you to contribute content. Depending on how often you contribute and how good your content is – we may even pay you!

Feel free to email me at [email protected] if you’re interested.

WE STILL NEED YOU GUYS – (Our readers!)

Without YOU, there is no US. If you like this website, we’d really appreciate it if you would take a moment and email or text a few of your friends to check us out at www.SkiSoutheast.com and www.ResortCams.com. If YOU like our website – chances are some of your friends would as well and we’re wanting to spread our wings just a bit and we need YOU to help us get the word out. We saw nearly 5 Million visitors in the last calendar year and we’d love to double that this season.

That’s about it for me today. If you want to comment – drop me an email at [email protected]