Up to 17″ of Snow Has Fallen this Week! See where! 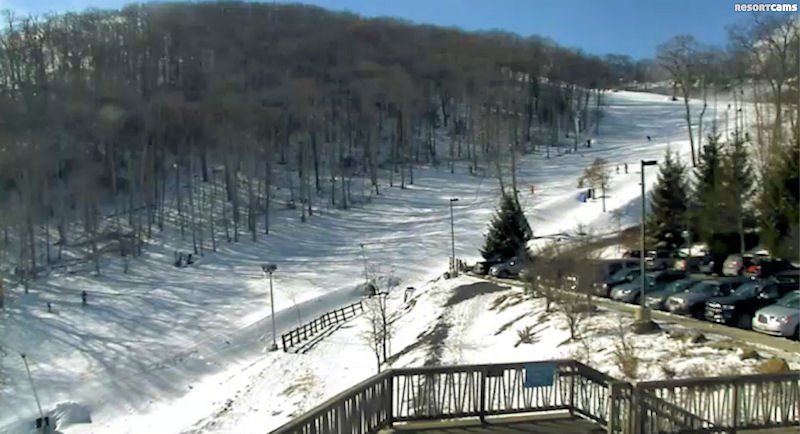 I Have NEVER seen so much snow fall and I Still Can’t Make a Damn Snowman!…around my house anyway! (More on that in a bit.)

Kenny (theKenDog) Griffin is off today and on his way to ride at Sugar Mountain on this snowy Friday in the mountains of North Carolina. 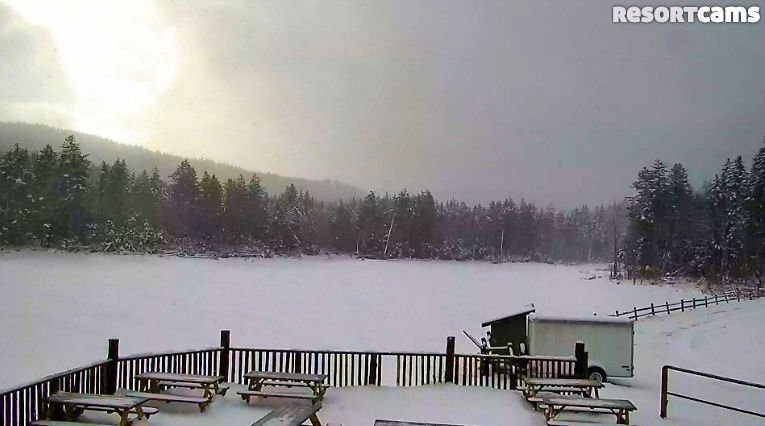 <Snowshoe this morning via the Boathouse Cam. It’s actually snowing pretty hard as of this report…

It’s been snowing seemingly every day here for the last week in Boone and Banner Elk. I’ve occasionally had a moment to check in on webcams and I’ve seen the snow falling. I just assumed that if it was snowing lightly here, that it MUST be bombing snow further north. That HAS BEEN the case as up to 17″ of natural snow has fallen into the West Virginia mountains of Snowshoe, Canaan Valley and Timberline Resorts.

HEADING TO THE MOUNTAINS? CONDITIONS ARE AWESOME!

Check the SNOW REPORT for all of the details but suffice to say that the conditions are EVERY ski area in the Southeast and mid-Atlantic is in THE BEST shape that they’ve been all season. END OF STORY.

Snow is falling and snowmaking is happening across the region but only if the ski resorts simply want to do so. Conditions are that good. There’s plenty of base everywhere and natural snow is flying. That will make for an awesome getaway weekend if you choose to head up the mountain.

Today I’m just talking a little NATURAL SNOW and I guess I’m also giving some attention to the fact that we’re now AT LEAST at the halfway point for every ski resort in the region. In some cases we’re only SIX WEEKS away from that date in mid-March when a couple of our ski areas will traditionally close for season. (I could see my buddy, Joe Stevens, cringe a little when I say that because he says that ski resorts don’t close – they simply cease snow ops. He’s correct in that a lot of the ski resorts still have their shops and stores, and restaurants all open.

Anyhow – here we are closing in on February 1st and it occurred to me that a lot of ski resorts have gotten to this point in the season and NOT had all of their slopes and trails open. It’s been a crazy season in terms of a lack of natural snow and it’s even been borderline a lot of the time in terms of consistently cold temps with which the ski areas can MAKE snow. However, we’ve been on a cold stretch now for a couple of weeks and we’ve even had some natural snow and yet it’s kind of odd that many of our resorts seem to be “phoning it in” in terms of simply getting by with what they feel that they “have” to have open. Don’t get me wrong, there’s PLENTY of great slopes and trails open at every ski resort in the region – but I guess I’m enough of a ski-diehard I’m thinking if ya got ’em…open them.

That said, today I’m detailing each resort in the region and reporting the snows of late, the total snow on the season AND how many trails are open. Today I’m simply ranking them in the order of who has the most trails open…but beginning with those resorts that ARE 100% open. (ONlY SIX RESORTS ARE 100% OPEN…)

THE ONE HUNDRED PERCENTERS… 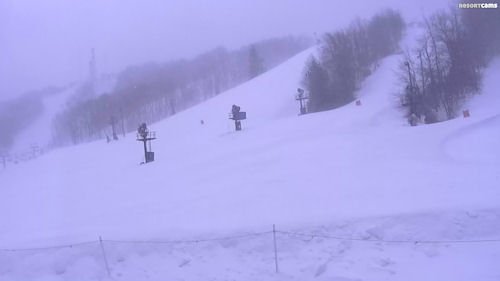 Winterplace – Reporting 2″ of new snow and they are 100% open with 27 of 27 slopes and trails and they are now up to 22.5″ of snow on the season. Needless to say Winterplace is looking winter-like! Go play!

Massanutten – No report of new snow except for “FLURRIES” and they’ve seen 14.5″ on the season. Mass is open with 100% of their terrain which is 14 of 14. The snow tubing hill looks awesome with 10 lanes open today. (By the way we’re shipping Massanutten a NEW camera today!)

Appalachian – A TRACE of new snow, 4″ this week and 10″ on the season. They have all 12 slopes open with awesome conditions.

Omni Homestead – They are not reporting any snow but we’re seeing reports of about one-half inch of new snow and that gets them to 9″ on the season. The Homestead is operating on 100% of their 9 trails. 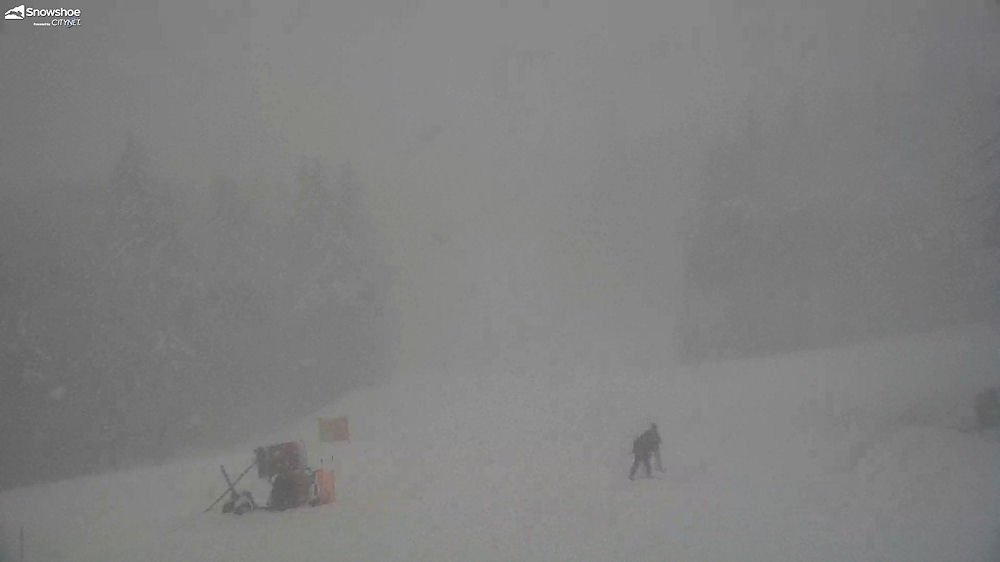 It is PUKING SNOW this morning at Snowshoe’s Silver Creek! Watch that one LIVE!

Snowshoe Mountain – 53 of 60 slopes and trails. When you’re reporting who has THE MOST terrain open – you’ll always HAVE to begin with Snowshoe as they ARE the largest ski resort in the region. They’ve ALSO gotten the MOST natural snow on the season although they are about two feet below where they should be on the season. Snowshoe received 3″ of snow in the last 24 hours and SEVENTEEN INCHES in the last 7 days and now 75″ on the season.

Canaan Valley – 36 of 44 slopes and trails open. Canaan is reporting 2.5″ of new snow and 17.3″ of snow in the last 9 days AND 73.4″ on the season! That’s NATURAL SNOW and not the sometimes mis-reported man-made snow that some ski areas have begun to report as “new snow”. (Yes I HAD to “go there”. Suffice to say that Canaan will be playing in POWDER today and this weekend.

Wisp – 27 of 34 slopes and trails. NO SNOW reported in the last 2 days but 8″ this week and 50″ on the season. Obviously things are looking pretty snowy and the slopes will be in awesome shape today and this weekend as the forecast is for 2-4″ of snow at Wisp for today and snow throughout the entire weekend! 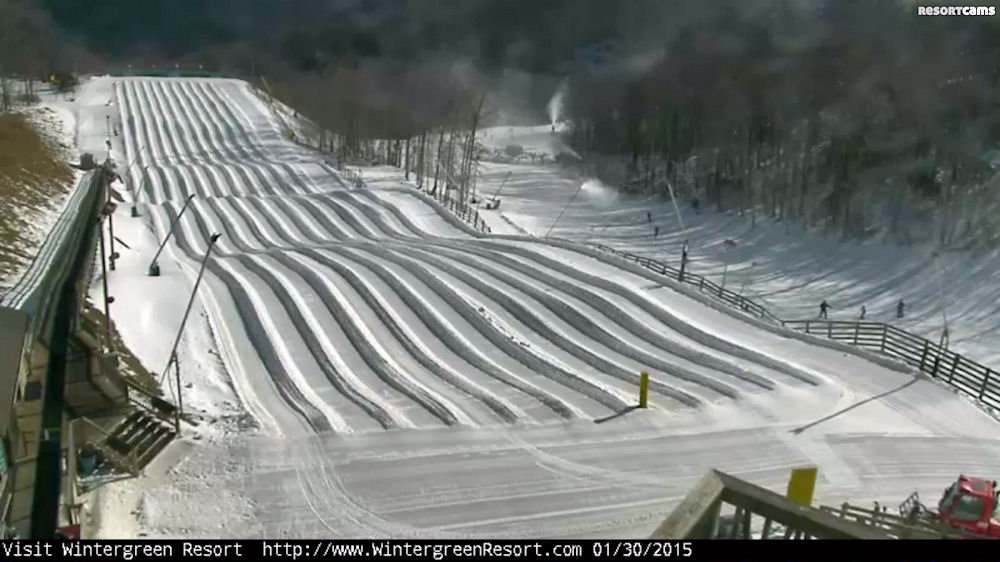 Wintergreen – 26 of 26 slopes and trails open with ONLY “Tyro” the trail off to the farthest right side of the mountain not open. Tyro is also the long trail that comes off of “Tequila” in case you’re wondering. Wintergreen is not reporting any NEW SNOW but they’ve had 10″ on the season AND they’re HOPING for big snows this week. Here’s their latest BLOG post, “Fantastic Snow! – still watching Sunday PM snow event… With plenty of cold air in place and a storm passing through our region Sunday evening, the end of this week and beginning of next could include 6″ of fresh snow.  If this system tracks in our favor, already great conditions will get even better!  Keep an eye on this developing storm and make plans to visit Wintergreen soon!!”

(As I have reported – I REALLY like the way they report…”

Sugar Mountain – 20 of 21 slopes and trails open and Sugar Bear is the only slope NOT open and it’s rarely open. For those unaware, “Sugar Bear” is that little, hidden slope off to the right of what is NOW “Oma’s Meadow” (used to be Big Red). Sugar is reporting 2″ of new snow – although the official CoCoRahs guys up there at The Reserve AND at the Police Station are reporting less than 1″ or so. Of course the wind is kicking up there so unless you’re an official reporting station (and Sugar isn’t) you’d probably see some 2″ spots of blown snow so we’ll give them a break. Sugar’s had FIVE DAYS STRAIGHT with some measureable snowfall – although it has totaled 6″ and now 33″ on the season.

Cataloochee – 17 of 18 slopes and trails. Cataloochee is reporting “YES” for snowfall but not saying how much. They are at 17″ on the season and in awesome shape with some snow in the forecast as well. Cat is actually open with everything but their “Wild Cat Glade” trail which is a 400′ connector slope.

Wolf Ridge – 12 of 15 slopes and trails. It’s 22° this morning and with the winds “HOWLING” up there it feels like 9° this morning. Wolf didn’t make snow but they are reporting a bit less than an inch of natural snow and 11″ now on the season.

Ober Gatlinburg – 8 of 10 slopes and trails. All are groomed except for Mogul Ridge – go figure! They are not reporting any NEW snow but they have had a couple of inches this week and 20″ on the season. My buddy John Cossaboom has been good enough to share natural snow when it falls so I may have you guys an update later.

Sapphire Valley – 2 of 2 slopes and snowtubing open. They are opening at NOON today and they are STILL reporting, “New Snow Last 24 hours: 8-10”.  Admittedly, they DO add the word “machine” spaced over to the right of that…but I still think that it’s deceiving. I guess they figure that the people who would be visiting Cashiers already no that they don’t get that much snow in a SEASON much less in the last 24 hours. Oh well.

JOIN US FOR THE SKISOUTHEAST SUMMIT!

We’re still INVITING YOU (if you’re reading this, YOU are invited) TO JOIN US and ski or ride at Snowshoe Mountain on February 28th-March 1st for our SkiSoutheast Summit. All you have to do is HOP OVER TO https://www.skisoutheast.com/ski-southeast-summit/ and simply call Snowshoe and BOOK your reservations. MENTION THE PROMO CODE of “SKISOUTHEAST” and you’ll get 20% OFF any lodging on the mountain AND a TWO DAY LIFT PASS for Saturday & Sunday lift tickets – FOR THE PRICE OF ONE.

Previous Post
Join Us for the SkiSoutheast Summit at Snowshoe Mountain
Next Post
Brad Panovich is Forecasting a Snowy Trend!