YOU’VE GOT TO BE KIDDING ME 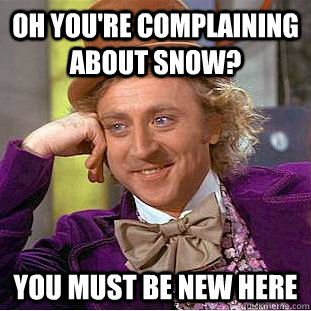 Now let me get this straight, the first real snow storm of the season in the southeast and there are some folks out there that complaining.  Did I miss the memo (I’m old), email or text announcing the demise of a fresh powder day on the slopes of your choice?

Let me rewind a couple of days, you see I was on the phone with a resort General Manager, celebrating the upcoming weather forecast in which natural snowfall was projected to be on the way.  He said that was all well and good, but people are calling to cancel their reservations because they are worried about getting to the resort, because where they live, they don’t plow and roads are terrible when it snows.  Now that has got to be one of the lamest excuses I have ever heard to miss out on a great day on the slopes.

Then I found out that from the same general manager, that prior to the natural snow forecast, those same snow days had rain in the forecast and the phones rang, with callers wanting to cancel their reservations due to that forecast.  Now let’s be clear on something folks, the folks calling were looking at a forecast that was more than two weeks out from reality.  I listened in amazement to all this information, realizing that despite all of Mike’s and my preaching about advanced forecasts, people still think a forecast two-weeks out really has any true bearing on what is really going to happen.  Basically, it is “Perception and Reality 101.”  Sometimes I just think people are looking for a reason not to have fun, as silly as that sounds.

In a recent “First Trax,” Mike (by the way, if you don’t know who he is, he is the one in the big chair for this internet site) mentioned that my eyes would roll when the advanced snow forecast total spreads were announced.  After working together for almost 20-years, he knows me well.  Talk about covering your you-know-whats, I saw as much as a six-inch spread, when a weather expert claimed that an area probably was going to get 2 inches, but could get as much as eight inches.  One of these days, they may understand that their readers, listeners or viewers, bypassed the two inches they mentioned and went straight to the eight.

Now with that in mind, they really can’t be wrong, but if “just” the two inches occurs, then yes, they are right, but people thinking of a deeper powder day are disappointed.  On top of that, those visitors traveling from areas that don’t receive a flake of snow are terrified at the thought of driving in two-inches of snow and won’t drive in a “possible” eight.  That’s when the phones start ringing and on the reservation side of things, cancellations occur due to the over-reaching forecast of eight inches.  Now let me be clear, there are some out there that when they hear the eight inches in the forecast jump in their AWD vehicles and head straight to their favorite slopes and when they don’t find the fresh eight inches, blame the resorts.  Now that is “You Can’t Win For Losing 101.”

I truly believe we have turned into a last-minute society and much of that is due to wanting to get as much bang for the buck as possible.  On the latter portion of that statement I totally agree, as families need to make sure when they put down their green backs (or is that 20 purple these days) or plastic, they will be getting an experience that in many cases is pricey but well worth the value at the end of the trip. My family is no exception to this thought process and when we are trying something different, price is not the main factor at the end, if the experience justifies the cost.  Now on the former portion of this paragraph’s opening sentence, while I realize that most experiences have weather involved, looking at two to three week out weather forecasts can only give you heartburn.  You put tons of time in planning a great trip, months ahead and then let someone else disturb your plans with a forecast that is so far out there in reality, that you reach for the phone or keyboard and pull the plug on the trip.

Let’s go back to that “Perception and Reality” thing for a second.  Case in-point, we have a house located at 2800 feet in the southern end of Randolph County in West Virginia.  At 4 pm EST on December 31, 2016, it was 36 degrees with a mixture of rain and snow occurring.  We traveled 13 miles, climbing 2000 feet in elevation and low and behold, it was 24 degrees and full out snowing.  Folks, the travel time was about 30 minutes and it was like two different worlds. My point to all this is, don’t let looking out your front door totally dictate your course of action if weather is part of your upcoming experience.

There are ways, these days, to actually know before you go, using first-hand knowledge to make decisions, not historically driven forecasts, that again could cause heartburn.  The best way is to get off this page and go directly to this site’s webcam page and see for yourself what it looks like at your favorite southeast ski resort.  I realize that what it looks like today is not what it is going to look like in three-weeks, but it is going to provide a clue of how things currently stand as it pertains to conditions.  With all that in mind, I suggest not looking at that less than accurate three week out forecast and look at the cams and watch the progression of the conditions, instead of canceling your upcoming trip, wait it out and go and have a great time.

That’s it for this week, much more to come as the season continues. Just remember whether it be cold or whether it be hot, we’ll weather the weather, whatever the weather will be.  Think about it! See you on the slopes and again, Happy New Year to everyone in Skisoutheast.com land.

Previous Post
Happy New Year Everyone! It was a successful Holiday Ski Week Across the Region!
Next Post
Brad’s New Year’s Skier’s Forecast