All I can say is "WOW". I hit it early and often hereb at Snowshoe and had some of the best turns that I have made in years…literally. The trick during these busy Holiday weeks and weekends is to get out early. Be there the moment the ropes drop and you'll get in 4-5 runs down the mountain in the first 45 minutes. That was the case for me, my youngest daughter and a few friends and family.

I LOVE me some Skip Jack anytime, but especially when it is covered in POW! After several inches of snow over the last few days, and another inch or so last night – AND with it puking snow early on – Skip Jack was awesome. I did that a few times early and then headed over to the Powder Ridge lift so that I cold play on the terrain park over there. I made it down a few times and actually hit most of the boxes and did every jump.

After eight runs down the slopes the bottom of Powder Monkey was a 15-20 minute wait. That's pretty long for Powder Monkey and I didn't want to fight Ball Hooter so we cross-country skied from the top of Powder Monkey to Shavers and walked up Skidder.

Riding up I heard from several people who had made the trip to Snowshoe on kind of a last minute trek that Snowshoe's reservations were 100% booked! I can believe it from the look of the lines at 11am.

I headed in and after a quick update and some snacks, and a couple of adult beverages I'll be heading over to Silver Creek. That's another secret that might not be AS MUCH of a secret after many of you read this, but Silver Creek is never as busy at Snowshoe's main mountain during the day. Night skiing can get busy, but day skiing on that side of the mountain is awesome and not as crowded.

JOHN COSSABOOM updated me this morning that Ober Gatlinburg was getting a little rain/snow mix this AM and had some thin coverage areas. THAT IS HOW IT HAS BEEN this season with such an array of conditions depending on where you look EVEN in the Southeast.

Right NOW it is PUKING SNOW here in West Virginia and according to the latest forecast we'll see more this afternoon and tonight. Good grief…

Somehow I have to get on the payroll. Wherever we show up…so does the snow!

Look for more updates, pics and videos in a bit. Check back.

Here are some looks around the region: 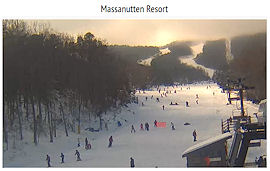 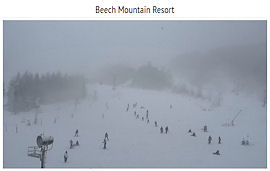 Beech is WOW as well! 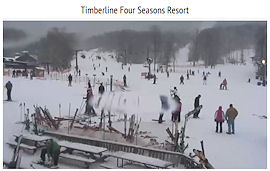 Timberline is getting some snow as well!

Previous Post
It’s Snowing (AGAIN) at Snowshoe this Saturday AM! Snow is forecasted for the entire Southeast!
Next Post
WHEN WEATHER DOMINATES THE NEWS YOU KNOW ITS A BAD THING OR A REALLY GOOD THING!