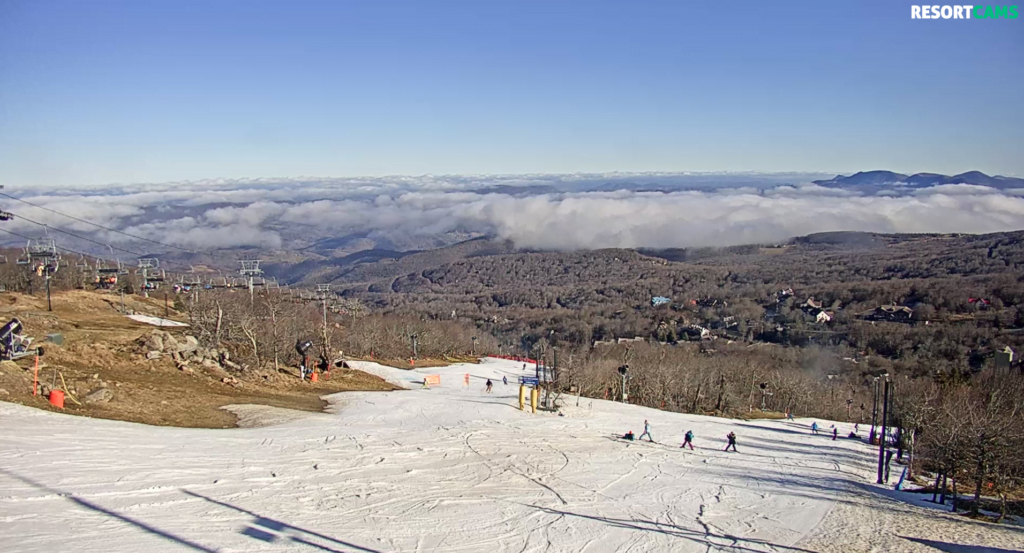 NC SKI RESORTS TOOK THE BRUNT OF THE SATURDAY STORM…

I wish I could report that the Saturday storm was a snow storm. The amount of precipitation that fell across most of the High Country areas of Blowing Rock, Seven Devils, Banner Elk, Sugar Mountain and Beech Mountain would have translated to somewhere in the ball park of 24″ to 50″ of snow. Instead, it was nearly 2″ of rain at Beech, nearly 3″ at Sugar and 4.10″ of rain at Appalachian Ski Mountain. When you consider that – on average – 1″ of rain equals 8″-13″ of snow (depending on how humid or dry things are) we would have had a blizzard around here!

…and it was p-r-e-t-t-y humid on Saturday across the region…and way more so in the North Carolina mountains where we even saw lightning and thunderstorms.

We joke often in the industry about rain being called “under-developed snow”. Well THIS rain was fully developed! On top of the rain that fell, we also saw temperatures in the mid-to-upper 60s at many locations on Saturday.

Today should be beautiful in terms of sunny skies and things will be a notch cooler today as we’re seeing some high 30s this morning and high temperatures should be slightly cooler than Saturday but still way milder than normal. I was looking at Snowshoe’s Saturday high at 66° – compared to the 38° that it should be this time of year! In case you’re wondering, the normal LOW temps for January 11-12 is 18° compared to the 55° we saw on Saturday morning and even the 37° this morning.

SOME REDUCED SLOPE NUMBERS ACROSS THE REGION… 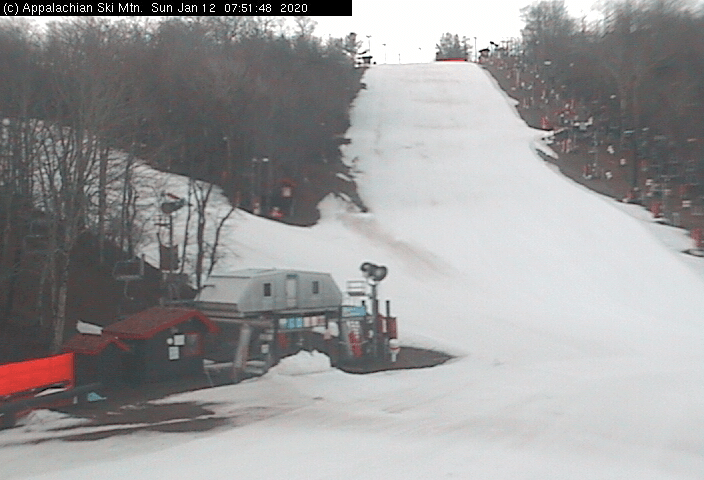 Last night, as I watched my driveway transition into a waterfall, I could not help but question “how in the world would resorts remain open?” As I got up early this morning to get the numbers and ‘see the damage” I was really, quite surprised that things looked as nice as they do this morning. Appalachian Ski Mountain must have been in the cross-hairs of the major portion of the monsoon-like storm that dumped over 4″ of rain on the Blowing Rock ski mountain and yet they groomed things up and are showing good terrain this morning.

Ditto Beech Mountain Resort and Sugar Mountain Resort. Beech looks quite inviting right now and Sugar did a “magic trick” with grooming this morning because things looked dreary at their base on Saturday evening.

You can VIEW the VIDEO SNOW REPORT BELOW and SCROLL DOWN for more commentary:

HERE ARE THE RAINFALL TOTALS I COULD FIND THIS MORNING:

That amount of rainfall was destined to effect slope numbers and it did, however, I am really shocked (and pleased) to report that ski resorts are holding on well.

Check the SNOW REPORT as all the deets are there today. Suffice to say that there is plenty of snow on the slopes, lots of skiable terrain available to play on as well as snow tubing and ice skating. You’ll need to view the SNOW REPORT to see who has what available today.

For the most part the West Virginia resorts are standing pat with their Saturday offerings. Resorts in Maryland, Virginia and Tennessee saw some slope numbers drop. Here are those resorts that saw some drops…

Beech Mountain Resort – dropped 6″ off base. Still has 10 slopes open. Some AMAZING grooming was done this morning. The mountain looks okay this morning with plenty of side-to-side coverage. There will be some thin areas and bare spots arising with skier traffic. The rain did force closure of the tube park and ice skating.

Bryce Resort dropped one slope, to 6 open. They have really not done a good job of reporting this season. Their own website was last updated 4 days ago, with the exception of the number of slopes.

Canaan Valley Resort – reporting a drop of 10″ from their base. Still reporting 20-40″ and the same (17) trails open on Saturday. There will be some thin coverage areas and bare spots.

Cataloochee Ski Area – reporting a 4″ drop in base and also dropped 5 trails and now have 7 trails open today and tonight.

Sugar Mountain Resort – dropped 6″-19″ from their reported base and only dropped one trail…now open with 8 slopes. The rains did force their tubing hill to close. They too did some amazing grooming this morning as things looked terrible at their base late on Saturday.

We’ve previously reported that Ober Gatlinburg and Sapphire Valley Ski Area was closed due to the weather.

Snowshoe Mountain – I mentioned that they still have 42 slopes and trails open. They only saw about one-half inch of rain and this morning they posted:

The storm has passed and we’re ready for another Sunday Funday at the Shoe! Read more…

Fortunately, the rain held off until after the day session yesterday and the slopes are still in great shape this morning. We’ll have some lingering wind gusts that should die down as the day goes on, making way for a pleasant afternoon with temperatures in the 40’s. Bear Claw will open around 11AM following ski team practice at Silver Creek. Planning a trip or four? Head to our Deals & Packages page and save big.

You guys can check out Saturday’s FirsTrax post as we talked a good bit about the forecast.

It alludes to Meteorologist Brad Panovich’s hint that colder days are ahead. We also heard from Meteorologist Ross Ellet who is forecasting that the second-half of winter should/could be colder than normal.

Until then, however, I am thinking that things will be pretty borderline for the coming week as hit and miss showers are in the forecast from Monday night through Wednesday night. Things look like snowmaking could kick back on up into West Virginia with some natural snowfall as well on Thursday evening into Saturday, but temps may be a frustrating notch milder elsewhere and even though some snow is in the forecast next weekend around Beech Mountain – the temperatures may not allow for snowmaking until sometime on Saturday.

We will have to keep an eye on the weather and forecasted temperatures over the next few days as MLK Weekend could be a bit sketchy at some mountain resort locations – at least for the first day or so.

In other words, not every ski area will see cold and snow until MAYBE Saturday, January 18th. The snow guns should be running in WV Thursday night and Friday night and for several days forward. Snowmaking may not crank up until Saturday NIGHT in the NC and VA Mountains…but that will mean really cold and good slope conditions for Sunday and Monday – so the MLK Weekend could be a good one after all is said and done.

The Second Half of Winter…Great?!?!

Man we hope so. For now at least the second half of January looks really cold with highs in the 20s and 30s and lows in the teens and 20s all the way through the end of this month. Hopefully February and March will be the same.