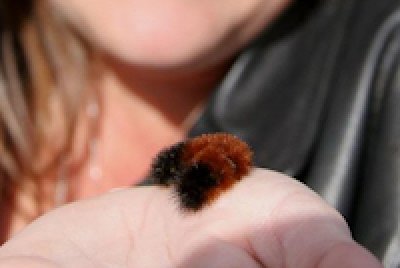 You know this is a big deal when the Associated Press has shared the results from this past weekend’s Woolly Worm Festival across the entire United States. WCOS TV Charlotte was covering the event, as were stations from around Western North Carolina.

The victorious woolly worm raced up strings that were nailed to the large race board throughout the day winning its own heat race, then some elimination finals races and finally the championship event late in the day on Saturday.

Saturday at the 35th Woolly Worm Festival in Banner Elk, the woolly worm that was victorious in the caterpillar races was "Lickety-Split", owned by Tammy Watson of Belmont, NC.

The morning began rather cold and blustery with temps in the 40s that seemed much colder as the sun kept hiding behind cloud cover. Festival goers came in droves as this weekend’s event also coincided with near-peak autumn color.

After an entire day of chilly temps and experiencing the sites and smells of the event, the winning worm was "read" by "worm reader and forecaster", Tommy Burleson.

If his forecast can be believed Western North Carolinians should break out the winter coats and invest in snow shovels for this winter. Lickety Split beat seven other worms Saturday in the finals at the 35th annual Woolly Worm Festival in Banner Elk. The victory meant the worm would be the official forecaster for the upcoming winter.

"It’s going to be cold and snowy and a few other things," said Roy Krege, known as Mr. Woolly Worm.

Roy Krege has been involved with promoting and announcing the races for all 35 years that the event has been hosted in Avery County. Coincidentally he was 35 years old when he started that volunteer position – which makes him a young 70 years old.

Roy and former N.C. State All-American basketball player Tom Burleson have taken on the mantle of "worm forecaster". According to them and old farmers the caterpillars have black and brown bands, with one color sometimes dominating the other. Folklore says black is associated with snowy weather, while brown is an indicator of mild conditions.

Burleson read the rings on Lickety Split and according to him the bands called for snow and below average temperatures for the first five weeks of winter. The next six weeks will be average to below normal, with unusual cold in the 12th week and more snow predicted for the final week. "If you own a ski resort and you’re a member of the Chamber of Commerce, that’s a good prediction," Krege said. "You ask my wife and she’s ready to go south."

Krege said festival winners and their predictions have an 84.5 percent accuracy rate.

Email Mike at [email protected] with your comments.