If you’re a snow lover…then this year’s winning worm will warm your heart – if not anything else this winter! The winning worm was “Twinkle Toes” and it was owned and apparently well-trained by Rebecca Perree, of West Palm Beach, Florida. 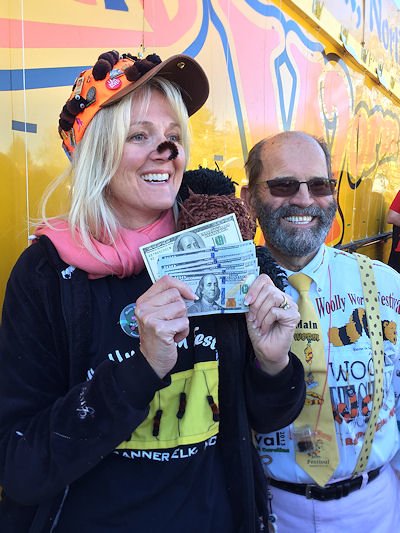 Rebecca pocketed a bit over $1000 for her efforts on Saturday…or from “Twinkle Toes” efforts. She poses in the photo to the left with long-time emcee Roy Krege and the cash!

It was an awesome Autumn weekend for the festival as temperatures were in the low 50s and the skies were brilliant, “chamber of commerce-like” blue.

It was a bit breezy as you will be able to see if you watch the aerial drone video that we shot. Those brisk breezes made the temperatures feel more like in the low 40s – which was PERFECT if you were looking for some fall-festival fun.

The more than 15,000-20,000 in attendance took in some awesome eats, great arts and crafts, some live entertainment (there WAS an Elvis sighting) and the races were captivating as always.

Children of all ages took part in the fun and there was even a young couple celebrating their honeymoon who raced.

You can view the aerial video here:

So WHAT DID TWINKLE TOES PREDICT FOR THE UPCOMING WINTER FORECAST? 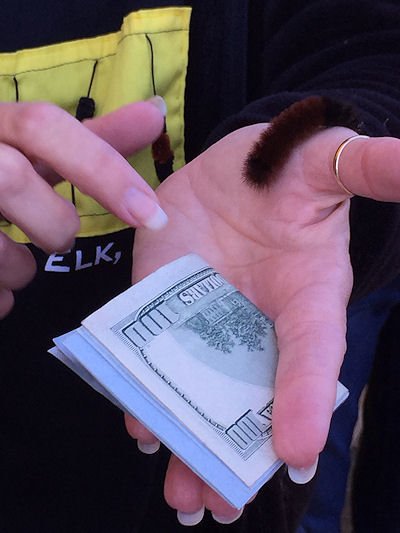 Twinkle Toes is shown in greater detail in the photo to the right and evidently it seems pretty disinterested in the cash.

Notice the predominantly darker brown coloring of the majority of the twelve bands of fur. According to old farmers out there, you can tell what a subsequent winter’s weather will be by observing the bands of the woolly worm. Each band represents one week of the twelve weeks of winter. If a band is BLACK then that forecasts snow and colder-than-normal temps.

Darker brown is cold with a little snow. Lighter brown is milder temps and no snow.

While the worm pictured to the left would be disqualified as a “non-resident” worm – SOME of the winners have resembled this one and caused some rather creative readings from Roy and Tommy.

Not so this year as Twinkle Toes looked every bit the part of a snow and cold-loving worm with no light-brown markings to speak of. 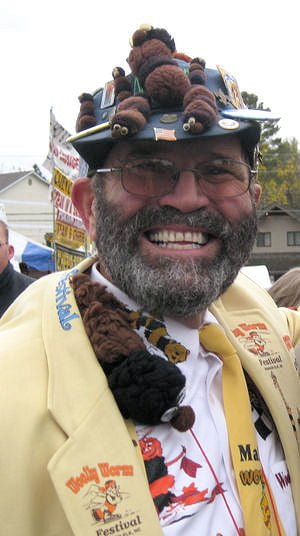 In case you’ve been living under a rock or if you’re just now having a look at what to expect for the approaching winter – nearly all of the weather gurus are forecasting a colder and snowier than normal winter with snowfall anywhere from 100-150% of normal.

So now that the Woolly Worm has “spoken” we’ll turn our attention to more of the meteorologist’s predictions and we’ll be sharing more of those with you soon.

Corporate Race Winner – (Didn’t even know there WAS such a thing! I’m think SkiSoutheast will be putting decals on a woolly worm for next year!) 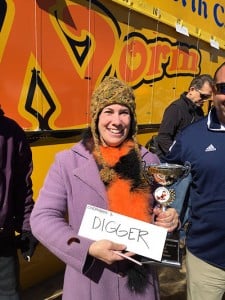 Lisa poses with “Digger” the Woolly Worm (clever!) and a pretty s-w-e-e-t trophy after winning the corporate race event.

Enjoy your day. Until next time.

Email me at [email protected] with any remarks.