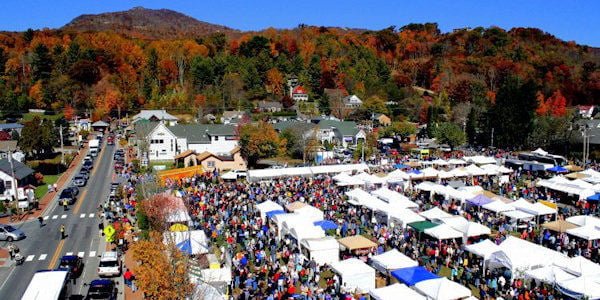 If you are a woolly worm aficionado like I am then you probably know that 38th Annual Woolly Worm Festival is taking place on Saturday and Sunday (October 17th and 18th) in beautiful downtown Banner Elk, North Carolina.

The weather is forecasted to be AWESOME with sunny skies and temps in the mid 40s…warming perhaps to around 47-49° by mid afternoon. Expect it to feel like an Autumn day as winds will be light and variable to around 11 mph.

I asked Woolly Worm Festival Chairperson, Mary Jo Brubaker if she was excited about the weekend forecast and her response was troubled as she shared, “Mike I AM excited about the weather, but I am not at all a happy person today because we only have around 400 woolly worms available right now and we need around 1200 or so.”

She added, “We have Adam Binder over at the new Banner Elk Elementary School RIGHT NOW ready to BUY woolly worms from anyone who has some to sell.”

I remember that LAST year’s woolly worm population was pretty low and she stated that this year’s availability is even lower – at least right now.

Sooooo, if ANY of you are planning to attend the festivities tomorrow and plan to race…there will be worms available…but you might also want to drive around some of the backroads on your way to  Banner Elk tomorrow and if you spot a couple of woolly worms, bring them with you!

I know that Dwight Barton Road near Willow Valley and Valle Crucis is usually good for spotting the fuzzy little critters. Also Hwy 221 as you enter into Linville Falls and that area are usually good spots. 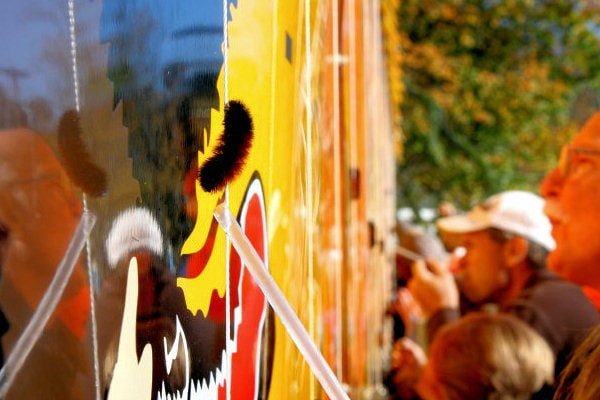 Since 1978, the residents of this village at the foot of Beech Mountain have celebrated the coming of the snow season with the Woolly Worm Festival. The races on Saturday will determine which one worm will have the honor of predicting the severity of the coming winter; and they make that worm earn the honor by winning heat after heat of hard-fought races – up a three-foot length of string.

Gates open at 9 AM on both Saturday and Sunday. The Woolly Worm races begin around 10 AM. Each heat consists of 25 worms and races continue all day until the grand final around 4 PM. The winning worm on Saturday gets the $1,000 first prize that accompanies the prestige of having your worm used to pronounce the official winter forecast. The Sunday worm races are for prestige, fun and small prizes. Participants wishing to race their worm may register at 9 AM.

In addition to the races, enjoy live entertainment and 140 food and craft vendors with their handcrafted items, plus rides, musicians and dance teams.

The Woolly Bear caterpillar has 13 brown and black segments, said to correspond to the 13 weeks of winter. The lighter brown a segment is, the milder that week of winter will be. The darker black a segment is, the colder and snowier the corresponding week will be. No person is more likely to have a winning worm than any other person. There is no other experience in life that can produce the absurd euphoria that comes from cheering for a caterpillar to climb a string!

The Woolly Worm Festival is sponsored by the Avery County Chamber of Commerce and the Kiwanis Club of Banner Elk and a portion of the proceeds go to support children’s charities throughout the county.

How to Race A Woolly Worm?

This annual harvest festival brings in tens of thousands in funds every year to support local charities. Enjoy live music, clogging and entertainment, face painting, pumpkin carving, arts and crafts, old-fashioned carnival games, great food at the concession stands, high-quality handmade craft exhibitors and more. And remember, it’s all for a good cause!

The fun starts at 8 a.m. on Saturday and lasts through 4 p.m. that afternoon.

The fair is held on the grounds of the Valle Crucis Conference Center in a huge meadow at the intersection of N.C. Highway 194 and Dutch Creek Road.

Admission is free and ample parking is available in the adjoining field for $10 per car. Bring cash to spend on local vendors and concessions. ATMs will be on site in two locations.

Pets are not allowed.

For More information: Call Holy Cross Church at 828-963-4609 or visit the Fair on the Web at www.vallecountryfair.org