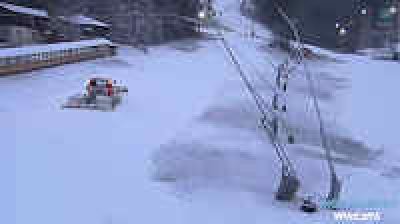 Check the SNOW REPORT for all the details, but suffice to say that everyone made snow overnight last night. Some traces of natural snow also fell and several ski areas opened a few more trails to play on for today.

As I’ve written a couple of times, I’m at Snowshoe this week and I don’t know what it is but Ed Galford and his snowmakers and the rest of the team need to put me on commission because everytime I come here it snows!

Ed Schneider, Snowshoe’s Producer, wrote me this morning, "I’m not sure what you do man but it seems more often than not you bring snow! Hope you had some good runs out there today, this morning was pretty good! And there were some powder stashes to be found out there (skiiers left on gandy looked best to me)."

I have to agree with Ed on all accounts. I found some sweet powder on Wednesday morning as it was still bombing a powder-fine snow and there were numerous places where the powder was awesome! The day turned into a bluebird day with sunny skies even though the temps hovered at 20° all day. The crowds hit the mountain at 11am and lift lines began to get to around 20 minutes as the day went along. That’s not too bad considering the pent up need for snow and the fact that only about half the mountain was open.

I ran into several people yesterday (not literally). A couple of messageboard peeps yelled me down in lift lines. I also saw Laura Parquette’s boyfriend, Nick, and we talked a bit. Nick’s a very cool guy. Ed Galford and I were meant to meet up later and several people like Gary and Mike at the Ballhooter lift had "Galford" sightings, but we missed making some turns.

I have to tell you guys and gals, things really look great up here…period. They’re not great considering how poor the weather has been. Things are simply great on the slopes right now.

If you get the chance, head to the mountains.

MANY, MANY thanks to KDog, Kenny Griffin who has committed to allowing me to hand off the snow reporting for the next few days. My internet connectivy has been tough this go around as the place I’m in does not have internet, which was dumb of me not to make sure of that. So I’ve been heading to Rimfire each morning to make the report. I’ll try to post some vids later in the day and week, but thanks again to Kenny for taking this responsibility over.

Kenny said he was heading to Beech to make some turns today and that some more snow is in the forecast.

See you guys soon…and here’s the notables for today!

Wolf Ridge OPENS TODAY for the first time this season. Mark that as December 29th. That’s how NUTS this season has been so far! They have the bunny hill and Broadway open for today. Two trails and they are open for day and night sessions.

Sapphire Valley is looking at a 23° reading this morning so we know they are making snow. There is no report on whether they are operating either their two trails or tubing as yet. We’d suggest calling ahead. Snow is in their forecast for Friday.

Bryce Resort made snow last night but the guns are now off this morning as we’re seeing a temp reading of 33° at 7:52am. They are grooming up the trails and although they have not updated their report quite yet, we’re seeing 4 trails open again today. Tubing is open as well.

Massanutten Resort is showing 24° as of this report and makingb snow on Nutten-To-It, Southern Comfort and Lower Showtime. They will have the first two trails open for day sessions and 6 lanes of tubing for today.

Wintergreen Resort added two trails and now offer 5 open for day sessions along with tubing. They are making snow as of this report.

Canaan Valley is making snow along with a TRACE of snow in the last 24 hours. They are operating on 5 trails for today and tubing.

Snowshoe Mountain added two more trails to take them to 31 trails open for today. Silver Creek has night skiing as well and tubing is open. Snowmobiling and all sorts of fun await your visit. Conditions are VERY nice at the Shoe!

Timberline Resort has 11 trails open for today and they are looking good right now after picking up a bit more snow in the last 24 hours and continued snowmaking. Tom Blanzy and his staff have Timberline in good shape heading into the new year.

Winterplace Resort – They are making snow this morning and opened two more trails to play on for today. They posted, "We will open Panorama and Glades this morning at 10 am. Plus we are working on opening even more trails!" That takes Winterplace to 11 trails open for day and night sessions.

Wisp Resort made snow and opened a couple more trails to take them to 6 trails open for today along with tubing, ice skating, mountain coastering and a mountain of other fun to be had!

Ober Gatlinburg – It has just been so borderline for Ober thus far as far as temps are concerned. They made snow last night and are making as much as possible in hopes of opening very soon.