Winter Has Returned for the Forseeable Future 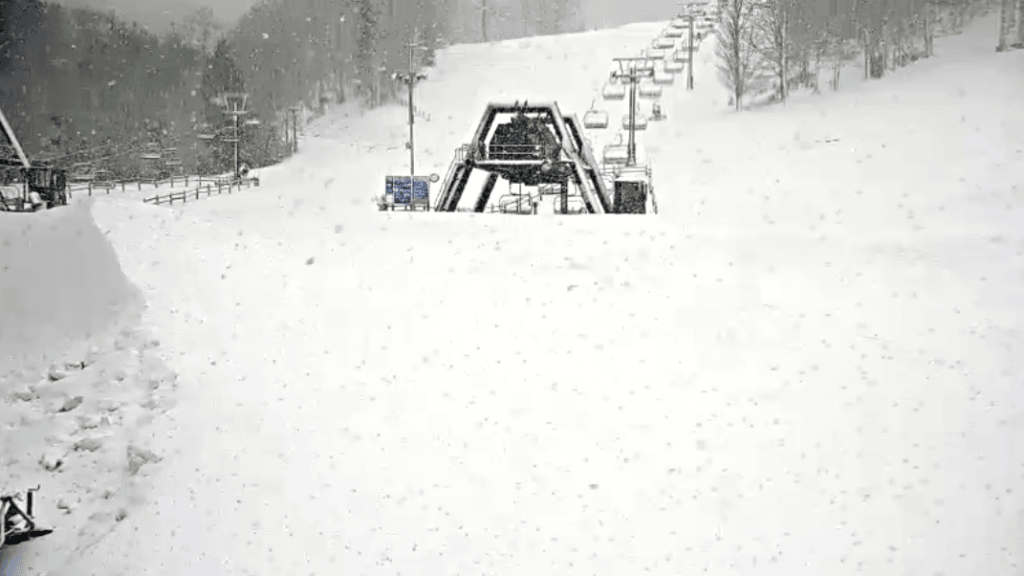 Hope you didn’t put your skis and snowboards up just yet.  Mother Nature is throwing us a late season curveball, giving us snow and cold and more snow in the next week.  We already have some flakes falling in West Virginia and more is on the way for the NC resorts later this weekend.  It’s not too often that you get one of the better weeks of the season to happen in March.

Well, spring is done-zo for the time being.  Yesterday sure was nice if you are jonesin’ for warmer temps.  It was in the 70’s here in Charlotte and all of the open ski areas got into the 50’s.  Looks like a nice day was had up at Snowshoe as they prepared for the Berming Man competition later today. 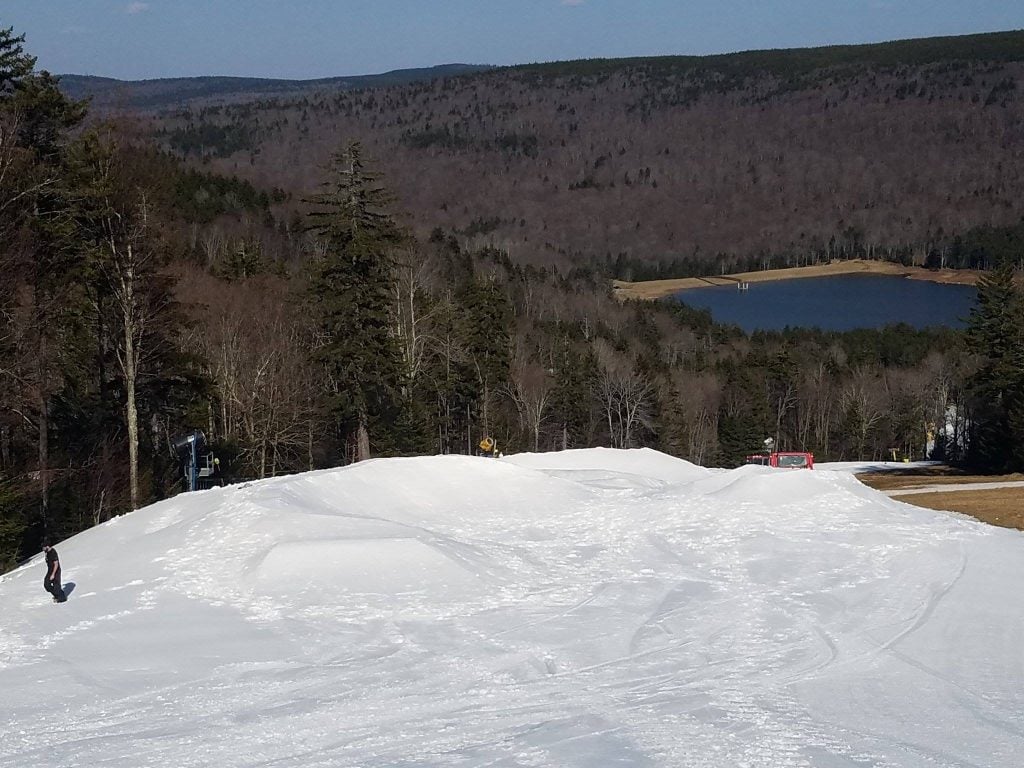 Those warm temps won’t happen again for a while as winter is about to make a return in a big way.  As forecasted, it’s already snowing up in West Virginia this morning.  Check out a screencast from the Canaan Valley base cam below.  Snow!

Canaan Valley Resort has been closed all week and are back open today for one final weekend.  This is a heck of a way to start the final few days!

We’re still waiting on David Lesher to post his morning update, but Timberline is reporting 2″ of snow thus far on their snow report as is Canaan.  That would already put both of them in the middle of the 1-3″ forecast range that the NWS has for today.  Snowshoe is also seeing some flakes falling right now and the forecast for them today is to see up to an inch or so of the white stuff.

While all the attention then turns to the Saturday night and Sunday snow for the North Carolina resorts, I am HIGHLY interested to see what happens tonight in terms of snowmaking.  Every ski area should be able to make snow tonight as we’ll see temperatures dive down into the teens and 20’s, and even some single digits for spots up in WV.  We’re into mid-March now in a sub-par year and I am curious to see who makes the call to fire up the guns tonight.  We have a couple resorts who have announced or will more than likely call it quits after this weekend.  I doubt they will make any snow but you never know.  If you read Mike’s report tomorrow morning and see that a resort didn’t make snow, I can’t imagine they will do so at all during this upcoming cold snap.

As for that snow, it’s still on track to mainly effect the North Carolina ski areas beginning late tomorrow and lasting into Sunday morning.  Cataloochee, Beech, Sugar, and App Ski Mountain are all expected to get some decent snow.  How much snow?  Well, 4-6″ seems like the general consensus right now.  Local Yokel Weather put out a forecast for Cataloochee with those amounts this morning.

Pull those skis out of the shed, give 'em a wax as @skiCataloochee is likely to pick up 4 – 6" of snow Sat aft into Sun morning! #JaninMarch pic.twitter.com/ltUzRehERj

Brad Panovich put out his initial forecast map yesterday with similar totals for the NC mountains.  You can see the 4-6″ swath of snow in the High Country.  As of this morning he hasn’t changed this.

Those amounts are highly vulnerable as the track of the system is very important with this storm.  They could go higher (wooo!) or they could be lower (booo) depending on where it goes.  Whatever happens, I’m sure the weather people will have some people complaining to them.  Never fails.

Interesting note, as advertised as this snow event has been all week, it has caught many people off guard who are already in spring mode.  My co-worker who lives in Banner Elk was shocked yesterday when she heard about snow this weekend.  She couldn’t believe it.  I couldn’t believe she doesn’t read my morning reports every day!  Ha.

Everyone in the weather community was a little shocked yesterday to see what the weather models began showing for next week.  After this weekend snow, it looks like another system is going to bring more widespread snow on Tuesday and Wednesday.  This one is a doozy and has Northwest Flow snow with it.  As of right now, it looks better than this weekend’s storm and Wednesday could be a special late season day with some powder.  Things can always change though this far out, but be aware and stoked that more snow is in the forecast for next week!

Whatever does or doesn’t happen with snow, it’s going to be plenty cold over the next 5-6 days.  Hopefully we see lots of snowmaking take place so that the resorts can stay open through the end of the month.  Last week at this time I thought my season would be over after the Summit.  Boy, I was wrong.

I said yesterday that I can’t remember a March in recent memory with a cold snap like this and I still think that’s the case.  It’s also crazy to see after such a down year.  The upcoming week could really wind up being one of the best stretches we end up seeing all season.  Who would have thought?

This is the final weekend of the season for some resorts, at least that’s the case right now.  Who knows what happens if we get some snow next week.

Mike will keep you all updated over the weekend with anymore announcements about closings and late season schedules.

An exciting weekend and week lies ahead!  Miracle March?  Maybe.  There are eleven open ski areas this weekend for you to choose from, so get out and make some turns.  I’ll be at Beech on Sunday for what is hopefully a mini-powder day.  Just get on the snow if you can, or make plans to do so next week.  It’s going to be good!  We only have 2-3 weeks left of this, so get it while you can!

Previous Post
One Final Day of Spring Skiing, Big Changes on the Way
Next Post
Ski Southeast Forecast for 3/10/2017